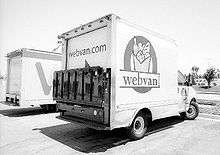 Webvan was an online "credit and delivery" grocery business that went bankrupt in 2001. It was headquartered in Foster City, California, United States, in Silicon Valley. It delivered products to customers' homes within a 30-minute window of their choosing.[1] At its peak, it offered service in ten US markets: San Francisco Bay Area, Dallas, San Diego, Los Angeles, Chicago, Seattle, Portland, Atlanta, Sacramento, and Orange County. The company had hoped to expand to 26 cities.[2]

In June 2008, CNET named Webvan the largest dot-com flop in history, placing it above Pets.com and eight other sites on its list.[3] It is now owned and operated by Amazon.com.

Webvan logo as seen on an orphaned shipping bin

Webvan was founded in the heyday of the dot-com bubble in 1996 by Louis Borders, who also co-founded the Borders bookstore in 1971.[4] Venture capitalists, including Benchmark Capital, Sequoia Capital, Softbank Capital, Goldman Sachs, and Yahoo!, invested more than $396 million in Webvan. They encouraged it to rapidly build its own infrastructure (the first-mover advantage strategy popularized by Amazon.com) to deliver groceries in a number of cities.[5] Some journalists and analysts considered this a serious error of judgment, and blamed it on the fact that none of Webvan's senior executives (or major investors) had any management experience in the supermarket industry, including its CEO George Shaheen who had resigned as head of Andersen Consulting (now Accenture), a management consulting firm, to join the venture.

The company raised $375 million in an initial public offering in November 1999 that valued the company at more than $4.8 billion. Up to that time, the company had reported cumulative revenue of $395,000 and cumulative net losses of more than $50 million.[6]

HomeGrocer, a similar company, started operating the year before Webvan. It went public in March 2000 and, like Webvan, was losing large amounts of money.[7] On 26 June 2000, Webvan bought out HomeGrocer.[8][9] 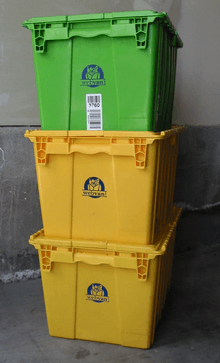 While Webvan was popular, the money spent on infrastructure far exceeded sales growth, and the company eventually ran out of cash. Webvan placed a $1 billion (USD) order with engineering company Bechtel to build its warehouses, and bought a fleet of delivery trucks.[10]

As part of its shutdown process, all non-perishable food was donated to local food banks. Webvan's legacy consists of thousands of colored plastic shipping bins, now used for household storage[11] and their re-painted distinctly-shaped vans seen in the San Francisco area years later.

The online grocery market sector in North America has seen many other failures, including Publix Direct. However, there have been a few successes. Two companies founded around the same time as Webvan that still exist today are Peapod started in 1989 in Chicago and SimonDelivers in the Minneapolis-St. Paul region of Minnesota and Wisconsin (although SimonDelivers shut down in 2008, it was acquired and re-opened as CobornsDelivers within months).

In the UK, Ocado launched as a concept shortly after webvan in 2000, and started operations in 2002 following a very similar business model, but without giving credit. It subsequently listed in 2010 and reached a market capitalisation of GBP 2.5bn (~USD 4bn) as of Q4 2013. Ocado has been profitable at the operating level since 2011, showing the business model may indeed be viable if expansion is kept in check.

Instacart is a web-based grocery delivery service started in San Francisco in 2012. Instacart's service is mainly provided through a smartphone app, available on iOS and Android platforms, and also through the company's website. Instacart uses couriers to bring orders from grocery stores to customers. Instacart raised its customer prices by 50% in December 2015, then a few months later the company cut by 50% its payments to couriers.[13]