For other uses, see West (disambiguation). 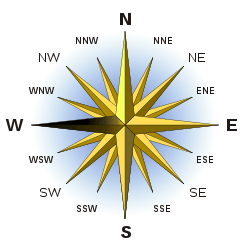 A compass rose with west highlighted

West is one of the four cardinal directions or points of the compass. It is the opposite direction from east.

The word "West" is a Germanic word passed into some Romance languages (ouest in French, oest in Catalan, ovest in Italian, oeste in Spanish and Portuguese). As is apparent in the Gothic term vasi (Visigoths), it stems from the same Indo-European root that gave the Sanskrit vas-ati (night) and vesper (evening) in Latin.

To go west using a compass for navigation, one needs to set a bearing or azimuth of 270°.

West is the direction opposite that of the Earth's rotation on its axis, and is therefore the general direction towards which the Sun appears to constantly progress and eventually set.

Moving continuously west is following a circle of latitude.

The phrase "the West" is often spoken in reference to the Western world, which includes the European Union (also the EFTA countries), the Americas, Israel, Australia, New Zealand and (in part) South Africa.

The concept of the Western part of the earth has its roots in the Western Roman Empire and the Western Christianity. During the Cold War "the West" was often used to refer to the NATO camp as opposed to the Warsaw Pact and non-aligned nations. The expression survives, with an increasingly ambiguous meaning.

In Chinese Buddhism, the West represents movement toward the Buddha or enlightenment (see Journey to the West). The ancient Aztecs believed that the West was the realm of the great goddess of water, mist, and maize. In Ancient Egypt, the West was considered to be the portal to the netherworld, and is the cardinal direction regarded in connection with death, though not always with a negative connotation. Ancient Egyptians also believed that the Goddess Amunet was a personification of the West.[1] The Celts believed that beyond the western sea off the edges of all maps lay the Otherworld, or Afterlife.

In Judaism, west is seen to be toward the Shekinah (presence) of God, as in Jewish history the Tabernacle and subsequent Jerusalem Temple faced east, with God's Presence in the Holy of Holies up the steps to the west. According to the Bible, the Israelites crossed the Jordan River westward into the Promised Land. In Islam, while in India, people pray facing towards the west as in respect to India, Mecca is in the West-ward direction.

In American literature (e.g. in The Great Gatsby) moving West has sometimes symbolized gaining freedom, perhaps as an association with the settling of the Old West (see also Manifest Destiny).