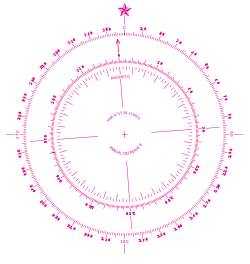 A common compass rose as found on a nautical chart showing both true north and magnetic north with magnetic variation. Also notice the correspondence between the thirty-two point rose (inner circle) and the modern 0-360° graduations.

A compass rose, sometimes called a windrose, or Rose of the Winds, is a figure on a compass, map, nautical chart, or monument used to display the orientation of the cardinal directions: North, East, South, and West—and their intermediate points. It is also the term for the graduated markings found on the traditional magnetic compass. Today, the idea of a compass rose is found on, or featured in, almost all navigation systems, including nautical charts, non-directional beacons (NDB), VHF omnidirectional range (VOR) systems, global-positioning systems (GPS), and similar equipment. 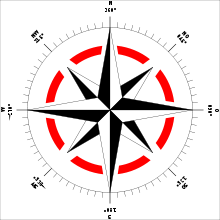 The modern compass rose has eight principal winds. Listed clockwise, these are:

4-point compass roses use only the four "basic winds" or "cardinal directions" (North, East, South, West), with angles of difference at 90°.

8-point compass roses us the eight principal winds—that is, the four cardinal directions (N, E, S, W) plus the four "intercardinal" or "ordinal directions" (NE, SE, SW, NW), at angles of difference of 45°.

The 32-point rose has the uncomfortable number of 11 1⁄4° between points, but is easily found by halving divisions and may have been easier for those not using a 360° circle. Using gradians, of which there are 400 in a circle,[1] the sixteen-point rose will have twenty-five gradians per point.

Linguistic anthropological studies have shown that most human communities have four points of cardinal direction. The names given to these directions are usually derived from either locally-specific geographic features (e.g. "towards the hills", "towards the sea") or from celestial bodies (especially the sun) or from atmospheric features (winds, temperature).[2] Most mobile populations tend to adopt sunrise and sunset for East and West and the direction from where different winds blow to denote North and South.

The ancient Greeks originally maintained distinct and separate systems of points and winds. The four Greek cardinal points (arctos, anatole, mesembria and dusis) were based on celestial bodies and used for orientation. The four Greek winds (Boreas, Notos, Eurus, Zephyrus) were confined to meteorology. Nonetheless, both systems were gradually conflated, and wind names came to eventually denote cardinal directions as well.[3]

According to the chronicler Einhard (c. 830), the Frankish king Charlemagne himself came up with his own names for the classical 12 winds.[4] He named the four cardinal winds on the roots Nord (etymology uncertain, could be "wet", meaning from the rainy lands), Ost (shining place, sunrise), Sund (sunny lands) and Vuest (dwelling place, meaning evening). Intermediate winds were constructed as simple compound names of these four (e.g. "Nordostdroni", the "northeasterly" wind). These Carolingian names are the source of the modern compass point names found in nearly all modern west European languages. (e.g. North, East, South and West in English; Nord, Est, Sud, Ouest in French, etc.)

The following table gives a rough equivalence of the classical 12-wind rose with the modern compass directions (Note: the directions are imprecise since it is not clear at what angles the classical winds are supposed to be with each other; some have argued that they should be equally spaced at 30 degrees each; for more details, see the article on Classical compass winds). The "sidereal" compass rose demarcates the compass points by the position of stars in the night sky, rather than winds. Arab navigators in the Red Sea and the Indian Ocean, who depended on celestial navigation, were using a 32-point sidereal compass rose before the end of the 10th century.[5][6][7][8][9] In the northern hemisphere, the steady Pole Star (Polaris) was used for the N-S axis; the less-steady Southern Cross had to do for the southern hemisphere, as the southern pole star, Sigma Octantis, is too dim to be easily seen from Earth with the naked eye. The other thirty points on the sidereal rose were determined by the rising and setting positions of fifteen bright stars. Reading from North to South, in their rising and setting positions, these are:[10]

The western half of the rose would be the same stars in their setting position. The true position of these stars is only approximate to their theoretical equidistant rhumbs on the sidereal compass. Stars with the same declination formed a "linear constellation" or kavenga to provide direction as the night progressed.[11]

A similar sidereal compass was used by Polynesian and Micronesian navigators in the Pacific Ocean, although different stars were used in a number of cases, clustering around the East-West axis.[12][13]

In Europe, the Classical 12-wind system continued to be taught in academic settings during the Medieval era, but seafarers in the Mediterranean came up with their own distinct 8-wind system. The mariners used names derived from the Mediterranean lingua franca—the Italian-tinged patois among Medieval sailors, composed principally of Ligurian, mixed with Venetian, Sicilian, Provençal, Catalan, Greek and Arabic terms from around the Mediterranean basin. 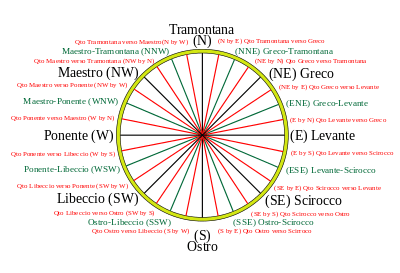 The exact origin of the mariner's eight-wind rose is obscure. Only two of its point names (Ostro, Libeccio) have Classical etymologies, the rest of the names seem to be autonomously derived. Two Arabic words stand out: Scirocco (SE) from al-Sharq (الشرق – east in Arabic) and the variant Garbino (SW), from al-Gharb (الغرب – west in Arabic). This suggests the mariner's rose was probably acquired by southern Italian seafarers not from their classical Roman ancestors, but rather from Norman Sicily in the 11th to 12th centuries.[14] The coasts of the Maghreb and Mashriq are SW and SE of Sicily respectively; the Greco (a NE wind), reflects the position of Byzantine-held Calabria-Apulia to the northeast of Arab Sicily, while the Maestro (a NW wind) is a reference to the Mistral wind that blows from the southern French coast towards northwest Sicily.

The 32-point compass used for navigation in the Mediterranean by the 14th century, had increments of 11 1⁄4° between points. Only the eight principal winds (N, NE, E, SE, S, SW, W, NW) were given special names. The eight half-winds just combined the names of the two principal winds, e.g. Greco-Tramontana for NNE, Greco-Levante for ENE, and so on. Quarter-winds were more cumbersomely phrased, with the closest principal wind named first and the next-closest principal wind second, e.g. "Quarto di Tramontana verso Greco" (literally, "one quarter wind from North towards Northeast", i.e. North by East), and "Quarto di Greco verso Tramontana" ("one quarter wind from NE towards N", i.e. Northeast by North). Boxing the compass (naming all 32 winds) was expected of all Medieval mariners.

In the earliest Medieval portolan charts of the 14th century, compass roses were depicted as mere collections of color-coded compass rhumb lines: black for the eight main winds, green for the eight half-winds and red for the sixteen quarter-winds.[15] The average portolan chart had sixteen such roses (or confluence of lines), spaced out equally around the circumference of a large implicit circle.

The cartographer Cresques Abraham of Majorca, in his Catalan Atlas of 1375, was the first to draw an ornate compass rose on a map. By the end of the 15th century, Portuguese cartographers began drawing multiple ornate compass roses throughout the chart, one upon each of the sixteen circumference roses (unless the illustration conflicted with coastal details).[16]

The points on a compass rose were frequently labeled by the initial letters of the mariner's principal winds (T, G, L, S, O, L, P, M). However, from the outset, the custom also began to distinguish the north from the other points by a specific visual marker. Medieval Italian cartographers typically used a simple arrowhead or circumflex-hatted T (an allusion to the compass needle) to designate the north, while the Majorcan cartographic school typically used a stylized Pole Star for its north mark.[17] The use of the fleur-de-lis as north mark was introduced by Pedro Reinel, and quickly became customary in compass roses (and is still often used today). Old compass roses also often used a Christian cross at Levante (E), indicating the direction of Jerusalem from the point of view of the Mediterranean sea.[18]

The twelve Classical winds (or a subset of them) were also sometimes depicted on portolan charts, albeit not on a compass rose, but rather separately on small disks or coins on the edges of the map.

The compass rose was also depicted on traverse boards used on board ships to record headings sailed at set time intervals.

The contemporary compass rose appears as two rings, one smaller and set inside the other. The outside ring denotes true cardinal directions while the smaller inside ring denotes magnetic cardinal directions. True north refers to the geographical location of the north pole while magnetic north refers to the direction towards which the north pole of a magnetic object (as found in a compass) will point. The angular difference between true and magnetic north is called variation, which varies depending on location.[19] The angular difference between magnetic heading and compass heading is called deviation which varies by vessel and its heading.