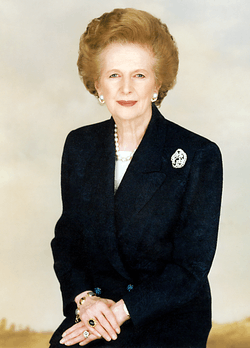 During the 1980s, members of the Conservative Party in Britain who opposed some of the more hard-line policies of Prime Minister Margaret Thatcher were often referred to by their opponents as "wets." Thatcher coined the usage in 1979–80, with the meaning of feeble, lacking hardness, or willing to compromise with the unions.[1] The label was especially applied to senior members of the government who were nevertheless outside Thatcher's inner circle and who expressed opposition to her strict monetarist policies designed to tackle inflation and her cuts to public spending.[2]

Gilmour was the most outspoken, delivering a lecture at Cambridge in February 1980 where he argued: "In the Conservative view, economic liberalism à la Professor Hayek, because of its starkness and its failure to create a sense of community, is not a safeguard of political freedom but a threat to it."[4]

In retaliation to being labelled as "wet", Thatcher's opponents within the party began referring to her supporters as the "dries."[5]

Policies which came to be labelled as "dry" ones included foremostly reducing public spending, cutting taxes, raising interest rates, tightly controlling the money supply, and reducing the regulatory power of the state – all policies which were closely associated with Thatcher.

Outside of the Parliamentary Conservative Party, the youth sections of the Party saw increasingly bitter factional battles between 'wets' and 'dries'. The Young Conservatives remained in the hands of a strong 'wet,' 'One Nation' (Tory Reform Group) faction, whilst the Federation of Conservative Students fell to an alliance of libertarian and Monday Club supporters.

Historically, English public-school slang described as "wet" someone judged to be weak, feeble or "soppy". Within the political context, the term was used both as a noun and as an adjective to characterise people or policies which Thatcher would have considered weak or "wet".[6]