Wettingen is a residential community in the district of Baden in the Swiss canton of Aargau. With a population about 20,000 (2014), Wettingen is the largest municipality in the canton.

Lägern mountain and Schartenfels castle, only part of the mountain is in Wettingen

Wettingen is located on the right bank of the Limmat river, located in the Limmat Valley (German: Limmattal), before the deep valley in Baden. Most of the town is located on the Wettingerfeld (Wettinger Field), which is a flat plain surrounded on all sides by natural borders: to the south and west by the Limmat, to the north by the steep southern slope of the Lägern, and to the East by the Sulperg (569 m (1,867 ft)). A vineyard is located on a section of the Lägern’s slope. Between the Lägern and the Sulperg is the undeveloped Eigital (Eigi valley). At the Eigital’s west end, in the northeastern section of the Wettingerfeld, is the relatively well-maintained old village center. A small creek flows through the Wettingerfeld and empties into the Limmat at the Gottesgraben. The stream is partially directed, partially buried, and partially re-naturalized.

The neighboring communities are Ennetbaden, Ehrendingen, and Niederweningen to the north. The community of Otelfingen is located to the east (via S-6), Würenlos to the southwest, Neuenhof to the south, and Baden to the west.

The blazon of the municipal coat of arms is Gules a Mullet Or and in base wavy Argent three barrulets wavy Azure.[4] 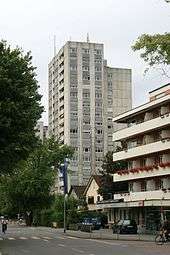 The historical population is given in the following table:[7]

The former Cistercian abbey at Klosterstrasse 11 and the neolithic stone-lined graves at Schartenstrasse 77 are listed as Swiss heritage sites of national significance.[10]

The municipality is located on the A3 motorway. Wettingen railway station is a stop of the S-Bahn Zürich on the lines S6 and S12. Together with Baden, it is served by the RVBW bus network, the central garage for which is located in Wettingen. In particular, lines 1, 4, 7 and 8 Pass through Wettingen, and in the rush hour, line 6 extends along the route of line 1.

FC Wettingen are the local football team and play at Stadion Altenburg. Their most famous achievement to date is appearing in the UEFA Cup in 1989-90.