This article is about heraldry. For the term used in Romantic poetry, see Blason.

In heraldry and heraldic vexillology, a blazon is a formal description of a coat of arms, flag or similar emblem, from which the reader can reconstruct the appropriate image. The verb to blazon means to create such a description. The visual depiction of a coat of arms or flag traditionally has considerable latitude in design, while a blazon specifies the essentially distinctive elements; thus it can be said that a coat of arms or flag is primarily defined not by a picture but rather by the wording of its blazon (though often flags are in modern usage additionally and more precisely defined using geometrical specifications). Blazon also refers to the specialized language in which a blazon is written, and, as a verb, to the act of writing such a description. This language has its own vocabulary, grammar and syntax, or rules governing word order, which becomes essential for comprehension when blazoning a complex coat of arms.

Other objects — such as badges, banners, and seals — may also be described in blazon.

The word blazon (referring to a verbal description) is not to be confused with the verb to emblazon, or the noun emblazonment, both of which relate to the graphic representation of a coat of arms or heraldic device.

The word blazon is derived from French blason, "shield." It was found in English by the end of the 14th century.[1]

Formerly, experts in heraldry assumed that the word was related to the German verb blasen, "to blow (a horn)".[2][3] Present-day lexicographers reject this theory as conjectural and disproved.[1]

The blazon of armorials follows a rigid formula, designed to eliminate ambiguity of interpretation, to be as concise as possible and to avoid repetition and extraneous punctuation. English antiquarian Charles Boutell stated:

Heraldic language [emphasis in original] is most concise, and it is always minutely exact, definite, and explicit; all unnecessary words are omitted, and all repetitions are carefully avoided; and, at the same time, every detail is specified with absolute precision. The nomenclature is equally significant, and its aim is to combine definitive exactness with a brevity that is indeed laconic.[4]

The rules of blazonry are as follows:

Any accessories present — such as crown/coronet, helmet, torse, mantling, crest, motto, supporters and compartment — are then described in turn, using the same terminology and syntax. 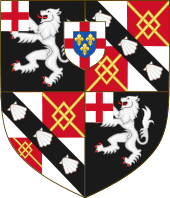 Quarterly 1st and 4th Sable a lion rampant on a canton Argent a cross Gules; 2nd and 3rd quarterly Argent and Gules in the 2nd and 3rd quarters a fret Or overall on a bend Sable three escallops of the first and as an augmentation in chief an inescutcheon, Argent a cross Gules and thereon an inescutcheon Azure, three fleurs-de-lis Or. Arms of Churchill.[6]

A quartered (composite) shield is blazoned one quarter (panel) at a time, proceeding by rows from chief (top) to base, and within each row from dexter (the right side of the bearer holding the shield) to sinister; in other words, from the viewer's left to right. A divided shield is blazoned "party per [line of division]" or "parted per [line of division]", though the word "party" or "parted" is almost always omitted (e.g. "Per pale argent and vert, a tree eradicated counterchanged"). A tincture is sometimes replaced by "of the first", "of the second" etc. to avoid repetition of tincture names; they refer to the order in which the tinctures were first mentioned. "Counterchanged" means that a charge which straddles a line of division is tinctured of the same tinctures as the divided field, reversed (see Behnsdorf arms pictured above).

But as to the rigid formulae of blazoning, John Brooke-Little, Norroy and Ulster King of Arms, wrote in 1985: “Although there are certain conventions as to how arms shall be blazoned ... many of the supposedly hard and fast rules laid down in heraldic manuals [including those by heralds] are often ignored.”[7]

A given coat-of-arms may be drawn in many different ways, all considered equivalent, just as the letter "A" may be printed in many different fonts while still being the same letter. For example, the shape of the escutcheon is almost always immaterial, so long as it is not of an anachronistic variety, a rare exception being the coat of arms of Nunavut, for which a round shield is specified.

Because heraldry developed at a time when English clerks wrote in Anglo-Norman French, many terms in English heraldry are of French origin, as is the practice of placing most adjectives after nouns rather than before. A problem arises as to acceptable spellings of French words used in English blazons, especially in the case of adjectival endings, determined in normal French usage by gender and number. It is considered by some heraldic authorities as pedantry to adopt strictly correct linguistic usage for English blazons:

To describe two hands as appaumées, because the word main is feminine in French, savours somewhat of pedantry. A person may be a good armorist, and a tolerable French scholar, and still be uncertain whether an escallop-shell covered with bezants should be blazoned as bezanté or bezantée. (Cussans, Handbook of Heraldry, 1898)

Cussans (1898) adopted the convention of spelling all French adjectives in the masculine singular, without regard to the gender and number of the nouns they qualify; however, as Cussans admits, the commoner convention is to spell all French adjectives in the feminine singular form, for example: a chief undée and a saltire undée, even though the French nouns chef and sautoir are in fact masculine.[8]

Tincture is the term used to describe the background of a field. It can be a colour, a metal or a fur (i.e. pattern). In a black and white representation of arms (such as in bookplates), colors are represented through the use of hatching or patterns of lines and dots. The list of tinctures and their names are listed below.

Full descriptions of shields range in complexity, from a single word to a convoluted series describing compound shields: