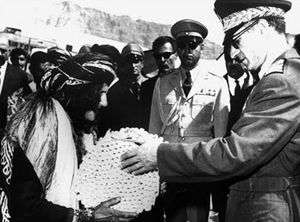 The White Revolution (Persian: انقلاب سفید‎‎ Enghelāb-e Sefid) was a far-reaching series of reforms in Iran launched in 1963 by Shah Mohammad Reza Pahlavi and lasted until 1978. Mohammad Reza Shah’s reform program was built especially to weaken those classes that supported the traditional system. It consisted of several elements, including land reform, sale of some state-owned factories to finance this land reform, enfranchisement of women, nationalization of forests and pastures, formation of a literacy corps, and institution of profit sharing schemes for workers in industry.[1]

In order to legitimize the White Revolution, the Shah called for a national referendum in early 1963 in which 5,598,711 people voted for the reforms, and 4,115 voted against the reforms.[6] What the Shah did not expect was that the White Revolution lead to new social tensions that helped create many of the problems the Shah had been trying to avoid. Land reform, instead of allying the peasants with the government, produced large numbers of independent farmers and landless laborers who became loose political cannons, with no feeling of loyalty to the Shah. As Ervand Abrahamian pointed out, "The White Revolution had been designed to preempt a Red Revolution. Instead, it paved the way for an Islamic Revolution."[7] Though the White Revolution contributed towards the economic and technological advancement of Iran, the failures of some of the land reform programs and the partial lack of democratic reforms, as well as severe antagonism towards the White Revolution from the clergy and landed elites, would ultimately contribute to the Shah's downfall and the Iranian Revolution in 1979.[8]

1971 film about the Shah's reforms

Mohammad Reza Shah had intended it to be a non-violent regeneration of Iranian society through economic and social reforms, with the ultimate long-term aim of transforming Iran into a global economic and industrial power. The Shah introduced novel economic concepts such as profit-sharing for workers and initiated massive government-financed heavy industry projects, as well as the nationalization of forests and pastureland. Most important, however, were the land reform programs which saw the traditional landed elites of Iran lose much of their influence and power. Nearly 90% of Iranian sharecroppers became landowners as a result.

Socially, the platform granted women more rights and poured money into education, especially in the rural areas. The Literacy Corps was also established, which allowed young men to fulfill their compulsory military service by working as village literacy teachers.

The White Revolution consisted of 19 elements that were introduced over a period of 15 years, with the first 6 introduced in 1962 and put to a national referendum on January 26, 1963. 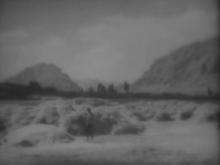 NARA Newsreel about unrest in Iran following the White Revolution, 1963.

There was a minor industrial revolution during this period of reform. Port facilities were improved, the Trans-Iranian Railway was expanded, and the main roads connecting Tehran and provincial capitals were asphalted. Many small factories opened up specializing in clothing, food processing, cement, tiles, paper, and home appliances. Larger factories for textiles, machine tools, and car assembly were also opened.[9] Educational institutions also grew after the launching of the White Revolution. Enrollment in kindergarten increased from 13,300 to 221,990, elementary schools from 1,640,000 to 4,080,000, secondary schools from 370,000 to 741,000 and colleges from 24,885 to 145,210. Not only were new schools opening, but they were also instituting new educational policies designed to undercut clerical control over education and religious education. The Literacy Corps also helped raise the literacy rate from 26 to 42 percent. The White Revolution also included certain reforms of women’s rights. Women gained the right to vote, to run for elected office and to serve as lawyers and later judges. The marriageable age for women was also raised to fifteen.[10]

It was true that Iran had made progress with various social programs from the White Revolution, but it was equally true that Iran still had one of the worst infant mortality rates and doctor-patient rates in the Middle East. It also had one of the lowest percentages of people who were receiving a higher education. For example, 68 percent of the adult population still remained illiterate, and 60 percent of children did not complete primary school.[11] This resentment and anger towards the Shah’s failed reforms seems to unite the people against the Shah, and certainly did not increase any class loyalty towards the Shah, as he had intended.

Land reform, which was the focus of the White Revolution, did what it was intended to do, weaken the nobles and landlords. In their place, though, emerged a new group of commercial farmers, and many previously large landowning families, such as the Pahlavi family, managed to renovate themselves into these commercial farmers.[12] A rapid expansion of small landowners did occur, but the peasantry as a whole did not acquire land. Only roughly half of the rural population received any land, and many of the people who did receive land did not receive enough to sustain themselves.[13] The result of the White Revolution was that the rural population could be separated into three groups: prosperous farmers, small landowners, and village laborers. The first group was the only group to really benefit from the land reforms, and this group consisted of former village headmen, bailiffs, and some former landlords. The second group consisted of sharecroppers who received no more than 10 hectares of land. Most of these people ended up trading their land in for shares in state cooperatives. The last group received no land at all, and survived as farm hands, laborers, or shepherds. Many of them migrated to urban centers for work.[14] 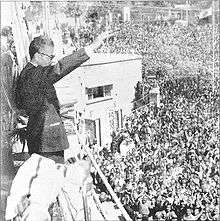 The White Revolution received most of its criticism from two main groups: the clergy, and the landlords. The landlords were angry about the land reforms because their land was bought by the government and then sold in smaller plots to the citizenry at a lower price. They also did not appreciate the government undercutting their authority when it came to dealing with peasants or land laborers.

The powerful Shī‘ah clergy were also angered at the reforms that removed much of their traditional powers in the realms of education and family law, as well as lessening their previously strong influence in the rural areas. A "large percentage of the upper echelon of the clergy came from landowning families" deeply affected by the reform and much absentee rent income went directly to the clergy and their institutions. The rents from an estimated 10,000 villages whose rents helped finance the clerical establishment were eligible for redistribution.[15]

The group, or more appropriately, the man who most openly opposed the White Revolution and the Shah himself was Ruhollah Khomeini. Although the clergy in Iran were not happy about many aspects of the White Revolution, such as granting suffrage to women, and the secular local election bill as well as land reforms, the clergy as a whole were not actively protesting. Khomeini, on the other hand, seemed to undergo a serious change of thought from the traditional role and practices of Shi’i clergy, and actively spoke out against the new reforms and the Shah. Khomeini’s famous speech at Feyziyeh School in June 1963 spoke out against the Shah’s brutality towards student protests, and for the first time, it was a speech attacking the Shah as a person.[16] This speech did lead to Khomeini’s exile, but being outside of Iran did not stop Khomeini’s protests, nor did it weaken his influence inside Iran.

Khomeini also attacked provisions of the reforms that would allow members of Iran's non-Muslim minority to be elected or appointed to local offices:

I have repeatedly pointed out that the government has evil intentions and is opposed to the ordinances of Islam. ... The Ministry of Justice has made clear its opposition to the ordinances of Islam by various measures like the abolition of the requirement that judges be Muslim and male; henceforth, Jews, Christians, and the enemies of Islam and the Muslims are to decide on affairs concerning the honor and person of the Muslims.
— [17]

A couple months later on Ashura, Khomeini gave an angry speech attacking the Shah as a "wretched miserable man" [18] Two days later, on June 5, Khomeini was arrested. This sparked three days of rioting and left several hundred dead. The riots were remembered in speeches and writings as the time when the army "slaughtered no less than 15,000".[19] Khomeini was released from house arrest in April 1964 but sent into exile that November.

What the Shah did not expect was that the White Revolution lead to new social tensions that helped create many of the problems the Shah had been trying to avoid. The Shah's reforms more than quadrupled the combined size of the two classes that had posed the most challenges to his monarchy in the past—the intelligentsia and the urban working class. Their resentment towards the Shah also grew since they were now stripped of organizations that had represented them in the past, such as political parties, professional associations, trade unions, and independent newspapers. Land reform, instead of allying the peasants with the government, produced large numbers of independent farmers and landless laborers who became loose political cannons, with no feeling of loyalty to the Shah. Many of the masses felt resentment towards the increasingly corrupt government; their loyalty to the clergy, who were seen as more concerned with the fate of the populace, remained consistent or increased. As Ervand Abrahamian pointed out, The White Revolution had been designed to preempt a Red Revolution. Instead, it paved the way for an Islamic Revolution.[20]

The White Revolution’s economic "trickle-down" strategy also did not work as intended. In theory, oil money funneled to the elite was supposed to be used to create jobs and factories, eventually distributing the money, but instead the wealth tended to get stuck at the top and concentrated in the hands of the very few.[21]

The most important and relevant consequence of the White Revolution and the reforms it brought was the rising popularity of Ruhollah Khomeini. With the growing perception of government corruption, and the implementation of reforms through the White Revolution, Khomeini grew to be an outspoken political enemy of the Shah. The White Revolution was the catalyst for Khomeini’s change in thought. Once Khomeini, as a respected member of the clergy, started to openly oppose the Shah and call for his overthrow, people of all different professions and economic status began to see him as a figure to rally behind.[22]