William Burnham Woods (August 3, 1824 – May 14, 1887) was a United States Circuit Judge and an Associate Justice of the United States Supreme Court as well as an Ohio politician and soldier in the Civil War.

Woods was born on August 3, 1824, in Newark, Ohio. He was the older brother of Charles R. Woods, another future Civil War general. He attended college at both Western Reserve University (now Case Western Reserve University) in Hudson, Ohio, before transferring to Yale University, from which he received an Artium Baccalaureus in 1845 with honors.[1] After graduating he returned home to Newark, Ohio, and read law by clerking for S. D. King, a prominent local lawyer and was admitted to the bar in 1847. Woods ended up partnering with his mentor, King, and entered into a legal practice together in Newark, from 1847 to 1862.

Woods, a loyal Democrat, was elected Mayor of Newark in 1856, and to the Ohio General Assembly in 1858, being named Speaker of the House shortly thereafter and also served as Minority Leader.[1]

Although Woods opposed the Civil War, because he opposed slavery, he came to accept a Union victory as a necessity. Thus in 1862 he left the Ohio state house to join the Union Army. He was appointed lieutenant colonel of the 76th Ohio Infantry, which served in the Western Theater. He fought at the battles of Shiloh and Vicksburg, and was breveted brigadier general. Woods commanded his regiment under William T. Sherman during the Atlanta Campaign and the Sherman's March to the Sea. During the Carolinas Campaign he fought with distinction at the Battle of Bentonville, where he commanded the brigade. He was appointed a brevet major general and was promoted to full Brigadier General in early 1865. He left the Army in February 1866, staying in the South and settling for a year in Mobile, Alabama, where he reopened a law practice before moving to Montgomery, Alabama, to continue his practice of law and cotton farming as well. He was a Chancellor, Middle Chancery Division of Alabama, Montgomery, Alabama from 1868 to 1869. 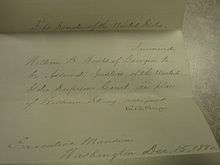 The Slaughter-House Cases, which "tested the issue of the reach and breadth of the 14th Amendment", were the most important cases he adjudicated on in the lower courts. He found that a state act that created a monopoly in the slaughterhouse business violated the Privileges and Immunities Clause of the new 14th Amendment and therefore was void", but three years later a majority of the Supreme Court reversed his decision in the Slaughter-House Cases. At this point (relatively early in his career), Woods was willing to read the provisions of the 14th Amendment broadly.[1]

Woods was nominated to be an Associate Justice of the Supreme Court of the United States by President Rutherford B. Hayes on December 15, 1880, to a seat vacated by William Strong. He was confirmed by the United States Senate, by a vote of 39 to 8, on December 21, 1880, and received commission the same day, taking the oath of office on January 5, 1881. Although he was the first person to be named to the Supreme Court from a Confederate state since 1853, this anomaly was lessened because he was originally a northerner and, by that time, a Republican, so he was palatable to the U.S. Senate's Republican majority.[2] Woods was not a major contributor to the Court and spent only six years on the bench. His service was terminated on May 14, 1887, due to his death in Washington, D.C.