For the Arthur Sullivan cantata, see The Golden Legend (cantata). 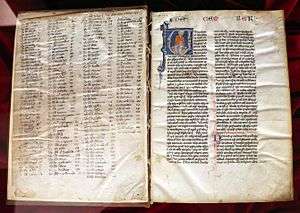 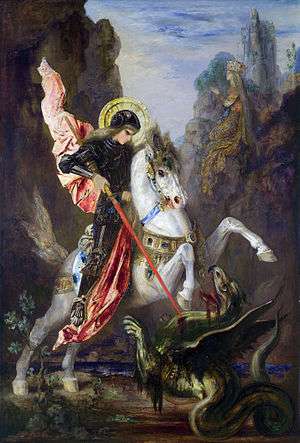 The story of Saint George and the dragon is one of many stories of the saints preserved in the Golden Legend.

The Golden Legend (Latin: Legenda aurea or Legenda sanctorum) is a collection of hagiographies by Jacobus de Voragine that was widely read in late medieval Europe. More than a thousand manuscripts of the text have survived.[1] It was likely compiled around the year 1260, although the text was added to over the centuries.[2] 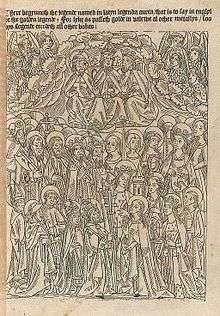 Mohammed tortured in Hell from fresco in San Petronio Basilica 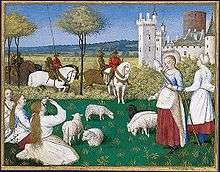 Saint Margaret attracts the attention of the Roman prefect, by Jean Fouquet from an illuminated manuscript

Initially entitled Legenda sanctorum (Readings of the Saints), it gained its popularity under the title by which it is best known. It overtook and eclipsed earlier compilations of abridged legendaria, the Abbreviatio in gestis et miraculis sanctorum attributed to the Dominican chronicler Jean de Mailly and the Epilogus in gestis sanctorum of the Dominican preacher Bartholomew of Trent. Over eight hundred[3] manuscript copies of the work survive, and when printing was invented in the 1450s, editions appeared quickly, not only in Latin, but also in every major European language. Among incunabula, printed before 1501, Legenda aurea was printed in more editions than the Bible.[4] It was one of the first books William Caxton printed in the English language; Caxton's version appeared in 1483 and his translation was reprinted, reaching a ninth edition in 1527. In 1900, the Caxton version was translated by Frederick Startridge Ellis, and published in seven volumes. De Voragine's original was translated into French around the same time by Téodor de Wyzewa.[5]

Lives of the saints

The book sought to compile traditional lore about all of the saints venerated at the time of its compilation. Jacobus de Voragine typically begins with an (often fanciful) etymology for the saint's name. An example (in Caxton's translation) shows his method:

Silvester is said of sile or sol which is light, and of terra the earth, as who saith the light of the earth, that is of the church. Or Silvester is said of silvas and of trahens, that is to say he was drawing wild men and hard unto the faith. Or as it is said in glossario, Silvester is to say green, that is to wit, green in contemplation of heavenly things, and a toiler in labouring himself; he was umbrous or shadowous. That is to say he was cold and refrigate from all concupiscence of the flesh, full of boughs among the trees of heaven.[6]

As a Latin author, Jacobus de Voragine must have known that Silvester, a relatively common Latin name, simply meant "from the forest". The correct derivation is alluded to in the text, but set out in parallel to fanciful ones that lexicographers would consider quite wide of the mark. Even the "correct" explanations (silvas, "forest", and the mention of green boughs) are used as the basis for an allegorical interpretation. Jacobus de Voragine's etymologies had different goals from modern etymologies, and cannot be judged by the same standards. Jacobus de Voragine's etymologies have parallels in Isidore of Seville's Etymologiae, in which linguistically accurate derivations are set out beside allegorical and figurative explanations.

Jacobus de Voragine then moves on to the saint's life, compiled with reference to the readings from the Roman Catholic Church's liturgy commemorating that saint; then embellishes the biography with supernatural tales of incidents involving the saint's life.

The chapter "St Pelagius, Pope and the History of the Lombards" begins with the story of St Pelagius, then proceeds to touch upon events surrounding the origin and history of the Lombards in Europe leading up to the 7th century when the story of Muhammad begins.[7]The story then goes on to describe "Magumeth (Mahomet, Muhammad)" as "a false prophet and sorcerer", detailing his early life and travels as a merchant through his marriage to the widow, Khadija and goes on to suggest his "visions" came as a result of epileptic seizures and the interventions of a renegade Nestorian monk named Sergius.[8] The chapter conveys the Medieval Christian familiarity with the belief systems of Muslims (which it refers to as Saracens).

Many of the stories also conclude with miracle tales and similar wonderlore from accounts of those who called upon that saint for aid or used the saint's relics. Such a tale is told of Saint Agatha; Jacobus de Voragine has pagans in Catania repairing to the relics of St. Agatha to supernaturally repel an eruption of Mount Etna:

"And for to prove that she had prayed for the salvation of the country, at the beginning of February, the year after her martyrdom, there arose a great fire, and came from the mountain toward the city of Catania and burnt the earth and stones, it was so fervent. Then ran the paynims to the sepulchre of S. Agatha and took the cloth that lay upon her tomb, and held it abroad against the fire, and anon on the ninth day after, which was the day of her feast, ceased the fire as soon as it came to the cloth that they brought from her tomb, showing that our Lord kept the city from the said fire by the merits of S. Agatha."[9]

The life of St. Barbara, a virgin who turned to Christianity against the will of her pagan father, is mostly known from the Golden Legend.[10] The Walters Art Museum.

A substantial portion of Jacobus' text was drawn from two epitomes of collected lives of the saints, both also arranged in the order of the liturgical year, written by members of his Dominican order: one is Jean de Mailly's lengthy Abbreviatio in gestis et miraculis sanctorum (Summary of the Deeds and Miracles of the Saints) and the other is Bartholomew of Trent's Epilogum in gesta sanctorum (Afterword on the Deeds of the Saints).[11] The many extended parallels to text found in Vincent de Beauvais' Speculum historiale, the main encyclopedia that was used in the Middle Ages, are attributed by modern scholars to the two authors' common compilation of identical sources, rather than to Jacobus' reading Vincent's encyclopedia.[12] More than 130 more distant sources have been identified for the tales related of the saints in the Golden Legend, few of which have a nucleus in the New Testament itself; these hagiographic sources include apocryphal texts such as the Gospel of Nicodemus, and the histories of Gregory of Tours and John Cassian. Many of his stories have no other known source. A typical example of the sort of story related, also involving St. Silvester, shows the saint receiving miraculous instruction from Saint Peter in a vision that enables him to exorcise a dragon:

In this time it happed that there was at Rome a dragon in a pit, which every day slew with his breath more than three hundred men. Then came the bishops of the idols unto the emperor and said unto him: O thou most holy emperor, sith the time that thou hast received Christian faith the dragon which is in yonder fosse or pit slayeth every day with his breath more than three hundred men. Then sent the emperor for S. Silvester and asked counsel of him of this matter. S. Silvester answered that by the might of God he promised to make him cease of his hurt and blessure of this people. Then S Silvester put himself to prayer, and S. Peter appeared to him and said: "Go surely to the dragon and the two priests that be with thee take in thy company, and when thou shalt come to him thou shalt say to him in this manner: Our Lord Jesus Christ which was born of the Virgin Mary, crucified, buried and arose, and now sitteth on the right side of the Father, this is he that shall come to deem and judge the living and the dead, I commend thee Sathanas that thou abide him in this place till he come. Then thou shalt bind his mouth with a thread, and seal it with thy seal , wherein is the imprint of the cross. Then thou and the two priests shall come to me whole and safe, and such bread as I shall make ready for you ye shall eat."

Thus as S. Peter had said, S. Silvester did. And when he came to the pit, he descended down one hundred and fifty steps, bearing with him two lanterns, and found the dragon, and said the words that S. Peter had said to him, and bound his mouth with the thread, and sealed it, and after returned, and as he came upward again he met with two enchanters which followed him for to see if he descended, which were almost dead of the stench of the dragon, whom he brought with him whole and sound, which anon were baptized, with a great multitude of people with them. Thus was the city of Rome delivered from double death, that was from the culture and worshiping of false idols, and from the venom of the dragon.[13]

Voragine had his limits; he describes the story of Saint Margaret of Antioch surviving being swallowed by a dragon as "apocryphal and not to be taken seriously" (trans. Ryan, 1.369).

The adverse reaction to Legenda aurea under critical scrutiny in the 16th century was led by scholars who reexamined the criteria for judging hagiographic sources and found Legenda aurea wanting; prominent among the humanists were two disciples of Erasmus, Georg Witzel, in the preface to his Hagiologium, and Juan Luis Vives in De disciplinis. Criticism among members of Jacobus' Dominican order were muted by the increased reverence towards the archbishop, which culminated in his beatification in 1815. The rehabilitation of Legenda aurea in the 20th century, now interpreted as a mirror of the heartfelt pieties of the 13th, is attributed[14] to Téodor de Wyzewa, whose retranslation into French, and its preface, have been often reprinted.

Value to students of medieval culture 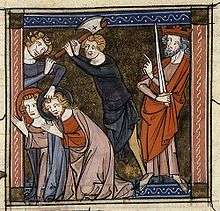 Saints Primus and Felician, from a 14th-century manuscript of the Golden Legend.

Written in simple, readable Latin, the book was read in its day for its stories. The book is considered the closest to an encyclopaedia of medieval saint lore that survives today; as such it is invaluable to art historians and medievalists who seek to identify saints depicted in art by their deeds and attributes. Its repetitious nature is explained if Jacobus de Voragine meant to write a compendium of saintly lore for sermons and preaching, not a work of popular entertainment.

The critical edition of the Latin text has been edited by Giovanni Paolo Maggioni (Florence: SISMEL 1998).

A modern translation of the Golden Legend is available from Fordham University's Medieval Sourcebook.[15]