KPF’s projects over the last 10 years include Roppongi Hills in Tokyo (2003), Unilever House in London (2007), the Mandarin Oriental, Las Vegas (2009), the Stephen M. Ross School of Business in Ann Arbor (2009), the RBC Centre in Toronto (2009), the University of Minnesota Science Teaching and Student Services Center (2010), Centra Metropark in Iselin, New Jersey (2011), the Heron Tower in London (2011) and the Buffalo United States Courthouse (2011). Over the past few years, KPF has completed the tallest towers in a number of countries: Lotte World Tower, the tallest in Korea (2015), the International Commerce Centre, the tallest in Hong Kong (2011), Tour First, the tallest building in France (2011). 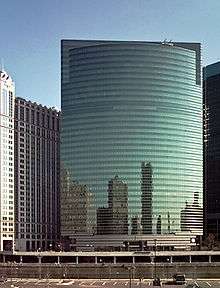 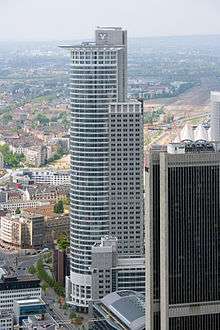 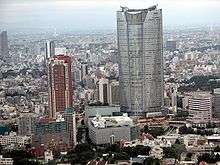 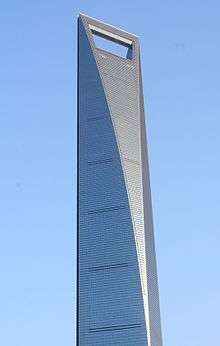 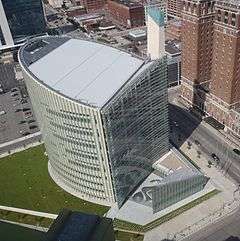 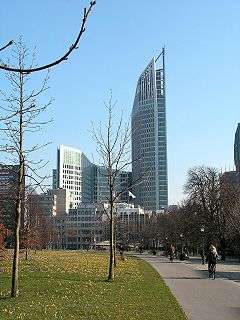 In New York, KPF is presently designing the Hudson Yards Redevelopment Project, a 26-acre site on Manhattan's West Side that is the largest undeveloped single piece of property on the island.[3] Also in New York, KPF recently completed NYU's new College of Nursing, Dentistry & Bio-Engineering Institute in collaboration with EYP Architects[4] and the 390,000-square-foot CUNY Advanced Science Research Center. KPF recently completed One Jackson Square (2009) and served as Executive Architect for the 10-year phased expansion and renovation of New York's Museum of Modern Art (2005).

Current projects around the world include the Midfield Terminal Complex at the Abu Dhabi International Airport and the 660-meter-tall Ping An Finance Centre in Shenzhen, China.[5]

KPF's philosophy is firmly rooted in the belief that success is the result of collaboration and dialogue.[6] KPF explains, “A similar sentiment is central to the manner in which we weave our buildings into the environmental fabric." [6] For a firm of its size, KPF takes on an unusually large number of restoration and renovation projects. Examples of this work include The World Bank Headquarters, Unilever House, and The Landmark in Hong Kong. KPF has been recognized for workplace collaboration. KPF’s intranet “Architectural Forum” has been described in Architectural Record as an example of “a resource that contributes to a learning environment through mentoring supporting teams and individuals with new ideas, and sharing best practices”.[7]

Shortly after its founding in 1976, the American Broadcasting Company (ABC) chose KPF to redevelop a former armory building on Manhattan’s West Side to house TV studios and offices. This experience led to 14 more projects for ABC over the next 11 years, as well as commissions from major corporations across the country, including the AT&T and Hercules Incorporated. By the mid-1980s, KPF had nearly 250 architects working on projects in cities throughout the United States. By 1985, even John Burgee (of rival architecture firm John Burgee Architects) called KPF, “The best commercial firm now practicing in the U.S.”[8] KPF's design for 333 Wacker Drive in Chicago (1983), which was awarded the AIA National Honor Award in 1984, made the firm nationally famous. It remains a Chicago landmark, and was voted “Favorite Building” by the readers of the Chicago Tribune in both 1995 and 1997.[9] In 1986, KPF’s Procter & Gamble Headquarters in Cincinnati, which included an open plan interior design by Patricia Conway, was recognized for its innovative design with the AIA National Honor Award. [9] After its success with these projects, KPF was selected to design buildings including the IBM World Headquarters in Armonk, NY (1997), the Chicago Title and Trust Building in Chicago (1992) and the Federal Reserve Bank of Dallas (1993).

In the 1980s and 1990s, KPF transformed from an American firm known for its corporate designs into an international firm with institutional, government, and transportation commissions in addition to corporate work.

KPF completed the design for two blocks of the large-scale Canary Wharf redevelopment (1987) and the Goldman Sachs Headquarters on Fleet Street (1987–1991).[10] KPF has been selected for projects in the Canary Wharf area through the present day, including the Clifford Chance Tower (2002) to the KPMG's European Headquarters (2009). KPF’s subsequent work in the U.K. includes Thames Court in London (1998), the Rothermere American Institute at Oxford University (2001) and the master plan for the London School of Economics (2002). KPF’s design for the award-winning Westendstraße 1 in Frankfurt (1992), an early example of mixed-use design, further increased the firm's international prominence and solidified the firm's reputation as a progressive global practice. KPF was chosen for subsequent projects throughout Europe, including Provinciehuis in The Hague (1998), Danube House in River City, Prague (2003), the expansion and renovation of the World Trade Center in Amsterdam (2004) and the Endesa Headquarters in Madrid (2003).

KPF's introduction to the Asian market began with the 4,500,000-square-foot (420,000 m2) Japan Railways Central Towers project in Nagoya (1999). Within 10 years, KPF had projects in Japan, Korea, Indonesia, Thailand, Hong Kong, Taiwan and mainland China. Completed KPF projects in Asia include Plaza 66 on Shanghai’s Nanjing Xi Lu (2001), Roppongi Hills in Tokyo (2003), the Rodin Pavilion in Seoul (2003), the Merrill Lynch Japan Head Office in Tokyo (2004) and the Shanghai World Financial Center (2008), which was named the “Best Tall Building Overall” by the Council on Tall Buildings and the Urban Habitat in 2008.[11] KPF worked with renowned structural engineers, Leslie E. Robertson Associates, to maximize the Shanghai tower’s floor plate and material efficiency by perfecting its tapered form.[12] In addition to this work in Asia, KPF has completed projects in: the Middle East, including the Abu Dhabi Investment Authority Headquarters (2007) and the Marina Towers (2008); South America including Ventura Corporate Towers in Rio de Janeiro (2008) and Infinity Tower in São Paulo (2012); Australia, including Chifley Tower in Sydney (1992); and has also worked on several projects in Africa.