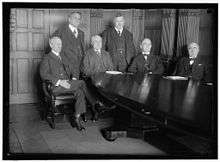 He was born in April 11, 1863 in Smyrna, New York to Thomas L. Willcox.[6] He attended the state normal school in Brockport, New York. He later attended the University of Rochester.[1][2]

He served as principal of the Webster Academy and Spring Valley High School. He then attended Columbia Law School, and was admitted to the bar in 1890.[1][2]

Around 1901 Mayor Seth Low appointed him to the New York City Department of Parks and Recreation where he served for two years as president of the commission.[1]

On January 1, 1905 he became the Postmaster of New York City. He was appointed by Theodore Roosevelt.[2][5]

In July 1, 1907 he became chairman of the New York Public Service Commission.[1]

Willcox served as chairman of the Republican National Committee from 1916 to 1918.[2] He encouraged Republican congressmen during votes for the 19th Amendment

Willcox resigned after being appointed to the Railway Wage Commission, also known as the U.S. Railroad Commission in 1918. Others appointed by the Woodrow Wilson administration were U.S. Secretary of the Interior Franklin Knight Lane, Charles Caldwell McChord of the Interstate Commerce Commission and D.C. chief justice J. Harry Covington. The commission investigated railroad wages.