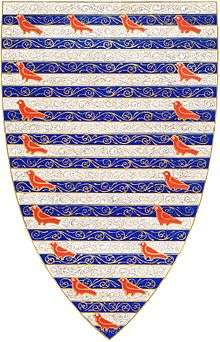 Heraldic shield of William de Valence, 1st Earl of Pembroke from his tomb in Westminster Abbey. Champlevee enamel with Diapering: Barry of argent and azure, an orle of martlets gules

William de Valence (died 18 May 1296), born Guillaume de Lusignan, was a French nobleman and knight who became important in English politics due to his relationship to Henry III. He was heavily involved in the Second Barons' War, supporting the King and Prince Edward against the rebels led by Simon de Montfort. He took the name de Valence ("of Valence").

He was the fourth son of Isabella of Angoulême, widow of king John of England, and her second husband, Hugh X of Lusignan, Count of La Marche, and was thus a half-brother to Henry III of England, and uncle to Edward I. William was born in the Cistercian abbey in Valence, Couhé-Vérac, Vienne, Poitou, near Lusignan,[1] sometime in the late 1220s (his elder sister Alice was born in 1224).

Coat of Arms of William de Valence before he became Earl of Pembroke, showing for difference a label gules of five points each charged with three lions rampant argent

The French conquest of Poitou in 1246 created great difficulties for William's family, and so he and his brothers, Guy de Lusignan and Aymer, accepted Henry III's invitation to come to England in 1247. The king found important positions for all of them; William was soon married to a great heiress, Joan de Munchensi or Munchensy (c. 1230 – after 20 September 1307), the only surviving child of Warin de Munchensi, lord of Swanscombe, and his first wife Joan Marshal, who was one of the five daughters of William Marshal, 1st Earl of Pembroke and Isabel de Clare, 4th Countess of Pembroke suo jure. As an eventual co-heiress of the Marshal estates, Joan de Munchensi's portion included the castle and lordship of Pembroke and the lordship erected earldom of Wexford in Ireland. The custody of Joan's property was entrusted to her husband, who apparently assumed the lordships of Pembroke and Wexford between 1250 and 1260.

This favouritism to royal relatives was unpopular with many of the English nobility, a discontent which would culminate in the Second Barons' War. It did not take long for William to make enemies in England. From his new lands in South Wales, he tried to regain the palatine rights which had been attached to the Earldom of Pembroke, but his energies were not confined to this. The King heaped lands and honours upon him, and he was soon thoroughly hated as one of the most prominent of the rapacious foreigners. Moreover, some trouble in Wales led to a quarrel between him and Simon de Montfort, who was to become the figurehead for the rebels. He refused to comply with the provisions imposed on the King at Oxford in 1258, and took refuge in Wolvesey Castle at Winchester, where he was besieged and compelled to surrender and leave the country.

However, in 1259 William and de Montfort were formally reconciled in Paris, and in 1261 Valence was again in England and once more enjoying the royal favour. He fought for Henry at the disastrous Battle of Lewes, and after the defeat again fled to France, while de Montfort ruled England. However, by 1265 he was back, landing in Pembrokeshire, and taking part in the Siege of Gloucester and the final royalist victory at Evesham. After the battle he was restored to his estates and accompanied Prince Edward, afterwards Edward I, to Palestine.

From his base in Pembrokeshire he was a mainstay of the English campaigns against Llywelyn ap Gruffudd and later Dafydd ap Gruffudd; in the war of 1282–3 that led to the conquest of Wales he negotiated the surrender of one of Dafydd's last remaining castles, Castell-y-Bere, with its custodian, Cynfrig ap Madog. He also went several times to France on public business and he was one of Edward's representatives in the famous suit over the succession to the crown of Scotland in 1291 and 1292.

William de Valence died at Bayonne on the 13 June 1296; his body is buried at Westminster Abbey.

William and Joan de Munchensi (described above) had the following children: