This article is about the decorative motifs. For other uses, see Diaper (disambiguation). 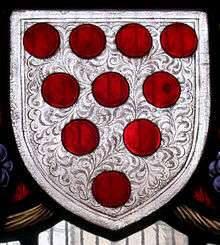 Arabesque-like diapering on the field of the shield of the See of Worcester: Argent, ten torteaux four, three, two, and one

Diaper is any of a wide range of decorative patterns used in a variety of works of art, such as stained glass, heraldic shields, architecture, and silverwork. Its chief use is in the enlivening of plain surfaces.

For the etymology see "diaper," meaning children's nappy. Oxford dictionary gives us the Greek dia for "cross" as in "diamond" or "diagonal," and aspros, Greek for "white". A white diamond or white cloth is used on the diagonal, hence the diagonal lattice or reticulation in patterning. 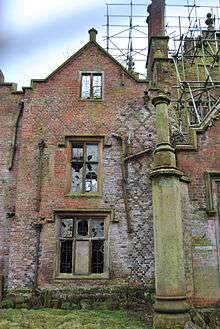 Diamond or lozenge pattern diaper work from 1608 on the walls of Bank Hall, Bretherton

In architecture and other decorative arts, diaper is applied as a decorative treatment of a surface with a repeat pattern of squares (chequers), rectangles, or lozenges. Diaper was particularly used in mediaeval stained glass to increase the vividness of a coloured pane, for example the field in a shield of arms.[1] A stone wall may be decorated with such a pattern sculpted in relief; in brickwork the effect may be achieved by using bricks of different colours, or by allowing certain bricks to protrude from the wall's surface to create a regular diamond-shaped pattern. In English flushwork limestone and dark knapped flint are used. Windows may be set in a diamond-shaped lattice.[2] 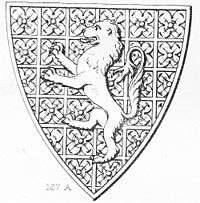 Arms of Percy, Beverley Minster, c.1350: A lion rampant. Note that the diaper decoration of squared quatrefoils in the field has not been included in the blazon. Were the shield to show the tinctures, the blazon would be: Or, a lion rampant azure[3]

In heraldry, diapering is a technique in which those who emblazon, draw, paint, or otherwise depict achievements of arms decorate large areas of flat colour by drawing crosshatches or arabesques. There is no standard, and each artist is allowed individual idiosyncrasies.

With very rare exceptions, diapering is not a part of the blazon, but is mere decoration, or ornamental accessory. Thus a shield with diapering is considered the same as a shield of the same design but without diapering. For this reason diapering must not be so obtrusive or so heavily drawn that it could be mistaken for a substantive charge or for a variation of the field. This is especially the case with diaper of simple cross-hatching which might be mistaken for a field of lozengy.

There are at least three Scots coats whose blazon includes diaper:

This article is issued from Wikipedia - version of the 9/26/2015. The text is available under the Creative Commons Attribution/Share Alike but additional terms may apply for the media files.