The society was founded when fifteen rising seniors from the Yale Class of 1884, with help from members of the Yale Class of 1883 who were considered publicly possible taps for the older societies, chose to abet the creation of The Third Society. The society changed its name to Wolf's Head five years later.[1][2][3] The effort was aided by over 300 Yale College alumni and some Yale Law School faculty in part to counter the dominance of Skull and Bones Society in undergraduate and university affairs.[3][4] The founding defeated the last attempt to abolish secret or senior societies at Yale University. The tradition continued of creating and sustaining a society if enough potential rising seniors thought they had been overlooked: Bones was established in 1832 after a dispute over selections for Phi Beta Kappa awards; Scroll and Key Society, the second society at Yale, was established in 1841 after a dispute over elections to Bones. The Third Society's founding was motivated in part by sentiment among some outsiders that they deserved insider status. "[A] certain limited number were firmly convinced that there had been an appalling miscarriage of justice in their individual omission from the category of the elect," some founders agreed.[3][5][6]

Before the founding at Yale of the Alpha chapter, in 1780, of Phi Beta Kappa in Connecticut (the second chapter established after that society's founding in 1776) Yale College students established and joined literary societies.[7] By the 1830s, the campus literary societies Linonia, Brothers in Unity, and Calliope had lost stature. Calliope folded in 1853, and the others shut down after the American Civil War.[8] Calliope, Linonia, and Brothers in Unity existed respectively: 1819-1853, 1768-1878, and 1735-1868.[9]

From the mid-1840s until 1883, several societies were started, but each failed to sustain the interest of Academical Department, or liberal arts, students at Yale College.[10] Star and Dart, Sword and Crown, Tea-Kettle, Spade and Grave, and E.T.L. disbanded.[11]

Phi Beta Kappa was inactive at Yale from 1871 to 1884.[12] In the 1820s, Anti-Masonic agitation across the United States prompted PBK to examine the role of secrecy in its proceedings. Secrecy was soon shelved at the Yale chapter.[13] Associated with PBK's national reorganization in 1881, secrecy disappeared as a signature among all chapters, quelling rivalry with collegiate fraternities, clubs and societies.[14] PBK exists today, without any secrecy, as an academic honor society.

Beginning in the 1850s the Yale undergraduate student body grew more diverse. The college was becoming an institution of national rather than regional importance. Students who hailed from environs beyond New England or who were not Congregationalist or Presbyterian entered the college in large numbers.[15]

In 1873, The Iconoclast, a student paper published once, 13 October, advocated for the abolition of the society system. It opined: "Out of every class Skull and Bones takes its men...They have obtained control of Yale. Its business is performed by them. Money paid to the college must pass into their hands, and be subject to their will....It is Yale College against Skull and Bones!! We ask all men, as a question of right, which should be allowed to live?"[18][19] The Class of 1884 agreed to support another revolt against the society system with a vote of no confidence to coincide with its graduation. It had been understood that the society system was beyond reform and might well be abolished.

A spirited defense of the society system appeared in the May 1884 issue of The New Englander, authored and published by members of Scroll and Key. Several periodicals reported regularly on the situation.[20] However, The Third Society had been incorporated in 1883, continuing a tradition among undergraduates of complaining about the societies but joining or establishing one if the opportunity opened.

The initial delegation, including ten Class Day officers from the Class of 1884 and led by Edwin Albert Merritt, met in secret during their senior year with the aid of members of the Class of 1883 who were "eager to start a society provided the evil features of the old societies would be eliminated. [The graduating and rising seniors] were unanimous on this point." Included among the supporters from the Class of 1883 were members touted as sure selections to Bones or Keys by the publishers of the Horoscope, an undergraduate publication that provided feature material on the most likely taps. The pro-society seniors won the Class Day vote, 67 - 50.[21] Over half the Yale Corporation and faculty were members of societies at this time. Those members of the community were careful to quash any subsequent attempts to restrict the societies.[22]

The New Haven Register reported in 1886: "Wolf's Head is not as far out of the world, in respect to its public doings, as are [Bones and Keys]. There is a sufficient veil of secrecy drawn around its mechanism, however, to class it with the secret societies, and this gives it a stability and respectability in Yale College circles that it might not have otherwise...."[23] The society was managed similarly to finals clubs associated with the Sheffield Scientific School; however, it soon took on almost all aspects of the older societies.[3]

The Third Society sat at the apex of a social pyramid bricked by junior societies (sophomore societies were abolished in 1875, freshmen societies in 1880),[24] campus organizations, athletic teams, clubs, and fraternities.[25][26]

In 1888, the society changed its name to Wolf's Head Society, consonant with the approval among undergraduates of the society's pin, a stylized wolf's head on an inverted ankh, an Egyptian hieroglyphic known as the Egyptian Cross or "the key of life". The earliest undergraduate members allowed fellow schoolmates to handle the pin, a specific refutation of pin display by the older societies. Eternal life is symbolized rather than death or erudition. A Roman fasces had been considered as a design element for the pin but was not adopted.[3][27]

Many pioneering and subsequent members mocked as "poppycock", from the Dutch for "soft excrement,"[28] the seemingly Masonic-inspired rituals and atmosphere associated with Skull and Bones. Disdain for "poppycock" has been exampled by The Pirates of Penzance prank, with the thespian pirate king persuaded to display the numbers 322 (part of the emblem of Skull and Bones) below a skull and crossbones at a local theatre,[29] and Whit Griswold's deprecations of poppycock -- "Bonesy bullshit" and "Dink Stover crap"—coloring undergraduate life,[30]

Wolf's Head maintained many traditional practices, such as the Thursday and Sunday meetings, common among its peers. Phelps Association member the Rt. Rev.Paul Moore, a successor trustee (1964 - 1990) for the Yale Corporation, recalled the night before he first encountered combat in World War II: "I spent the evening on board ship being quizzed by [a friend from Harvard] about what went on in Wolf's Head. He could not believe I would hold back such irrelevant secrets the night before I faced possible death."[31][32]

The "Old Hall" was erected within months of the founding. The older Academical Department societies and Sheffield School final clubs met in rented quarters at their respective foundings. The "New Hall" was erected on York Street in the 1920s. 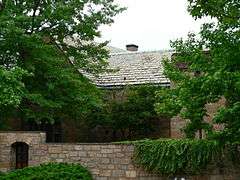 An olympic size swimming pool was said to be among the accommodations in Goodhue's building. Facilities for showers are available in the lower reaches of the edifice.[36] Goodhue was a protege of James Renwick Jr., architect of the first St. Anthony Hall chapter house in New York City.[35]

The society has been reputed to tap the gregarious "prep school type".[36][37] Past members were associated intimately with the: coeducation of Yale College,[38] establishment of the Yale residential college system and the Harvard house system,[39] founding of the Elizabethan Club,[40] and founding of the Yale Political Union.[41] The society has tapped women since the spring of 1992, and was Yale's last all-male society.[42]

Envoy to the Court of St. James's Edward John Phelps accepted the offer to be namesake to the alumni association before departing for England.[3]