Sheffield Scientific School was founded in 1847 as a school of Yale College in New Haven, Connecticut for instruction in science and engineering. Originally named the Yale Scientific School, it was renamed in 1861 in honor of Joseph E. Sheffield, a railroad executive. The school was incorporated in 1871. The Sheffield Scientific School helped establish the model for the transition of U.S. higher education from a classical model to one which incorporated both the sciences and the liberal arts. Following World War I, however, its curriculum gradually became completely integrated with Yale College. "The Sheff" ceased to function as a separate entity in 1956. 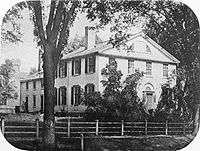 Second President's House, home to the Department of Philosophy and the Arts, 1847–1860

After technological developments in the early nineteenth century such as the electric telegraph, an interest was fostered in teaching applied science at universities. Harvard established the Lawrence Scientific School in 1846 and Dartmouth began the Chandler Scientific School in 1852. The stage was set at Yale for the transition in education beginning in 1846, when professorships of agricultural chemistry (John Pitkin Norton) and practical chemistry (Benjamin Silliman Jr.) were established. In 1847, the School of Applied Chemistry became part of a newly created Department of Philosophy and the Arts (later, the Yale Graduate School). Classes and labs were hosted in the Second President's House on Yale's Old Campus until funding and a suitable facility could be found.[1]

Norton died in 1852 and was replaced by John Addison Porter. Applied chemistry was followed in 1852 by a professorship of civil engineering (William Augustus Norton) establishing a school of engineering. These programs made up the Yale Scientific School.

In 1853 and 1854, science and engineering courses were listed in the Yale College course catalog as offered by the Yale Scientific School. Porter elicited help from his father-in-law, Joseph Earl Sheffield, and in 1858, Sheffield donated funds and real property for the school. The old Yale Medical School building on the northeast corner of Grove and Prospect Streets was renovated and renamed (South) Sheffield Hall. (It was demolished in 1931 and was on the current site of Sterling Tower, Sheffield Hall and Strathcona Hall (SSS).) Sheffield's building reinforced the division of Hillhouse Avenue into an upper, residential section, and a lower section devoted to education. In 1861, the school became the Sheffield Scientific School in recognition of his generosity devoted to "the promotion of the study of the natural, physical, and mathematical sciences."

Sheffield was one of Yale's greatest benefactors and continued to support the school throughout his life, giving a total of about US$500,000. Yale also received US$591,000 from his will as well as his house, the Sheffield mansion, designed and originally owned by Ithiel Town (demolished in 1957).[2] The school also benefited from the Morrill Act starting in 1863 and an agricultural course was begun. Land grant status, however, was transferred to the Storrs Agricultural School in 1893 after arguments by the state grange that the school was not a proper "farm school".[3]

A series of lectures, later known as the Sheffield Lectures was instituted by the school in 1866. Professor Othniel Charles Marsh of the school led four Yale scientific expeditions in search of fossils in 1870-3.

The Sheffield School innovated with an undergraduate course offering science and mathematics as well as economics, English, geography, history, modern languages, philology and political science. Sheffield also pioneered graduate education in the United States, granting the first Ph.D. in America in 1861 as well as the first engineering Ph.D in America to Josiah Willard Gibbs in 1863, and the first geology Ph.D. to William North Rice in 1867.

Unlike Yale College students at the time, Sheffield students had "no dorms, no required chapel, no disciplinary marks and no proctors".[4] The Academical Department of Yale (Ac) and Sheffield (Sheff) became rivals. Loomis Havemeyer, alumnus and registrar at Sheffield, stated: "During the second half of the nineteenth century Yale College and Sheffield Scientific School, separated by only a few streets, were two separate countries on the same planet." The Ac students studied liberal arts and would look down on the practical Sheff students.

The Vanderbilt-Sheffield Dormitories and Towers were built by Charles C. Haight from 1903 to 1906, and Haight's chapter house St. Anthony Hall was built in 1913. Byers Hall, designed by Hiss and Weekes and built in 1903, served as a center for social and religious life. These buildings are now incorporated into Silliman College, and St. Anthony Hall still owns its building, which completes the College and Wall Street corner of the Silliman College Quadrangle. In 2006-7, Silliman underwent a major renovation.

Also, in 1913, land in East Lyme was purchased for a field engineering camp (now the Yale Outdoor Education Center).

During the 1918-1919 reorganization of the educational structure of Yale University, the three years "select" course at Sheffield Scientific School was eliminated and a four-year course of study for those studying "professional science" and "engineering" was approved, while graduate courses were transferred to the Graduate School, leaving only undergraduate courses taught at Sheffield Scientific School from 1919 to 1945, coexisting with Yale College's science programs. The centennial was celebrated in 1947 with the Silliman lectures given by Ernest O. Lawrence, Linus Pauling, W. M. Stanley and George Wells Beadle.[6]

This transition occurred gradually, through the influence of "aggressive, powerful alumni" (including Edwin Oviatt, editor of the Yale Alumni Weekly) who "took control out of President Hadley's hands and forced a radical reorganization of Yale".[4] In 1956, the Sheffield Scientific School was terminated as an active school. The Board of Trustees still exists to oversee the Sheffield Scientific School property and meet legal requirements. The school's faculty is defined as teachers of science to graduate students under the Division of Science. Engineering teaching and research is now conducted within the School of Engineering & Applied Science.