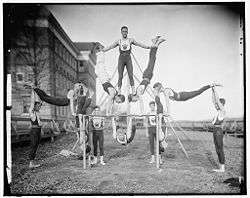 The school was founded in 1889 by Captain Robert Stringfellow Walker, who had been a member of the 43rd Battalion Virginia Cavalry (Mosby's Rangers) during the American Civil War.[1] The school occupies approximately 1,200 acres (4.9 km2) in Madison, Virginia. The campus is bounded on one side by the Rapidan River. It was originally the estate of William Madison, brother of President James Madison. The headmaster's residence, known as The Residence is taken entirely from an architectural design by Thomas Jefferson. It was listed on the National Register of Historic Places in 1979.[2] The property eventually passed to the Walker family. The school was founded when Walker hired a tutor to teach his six sons and other local children because of the lack of adequate schooling in the surrounding area. Today the campus is known for its historic Jeffersonian brick buildings as well as state of the art science and arts facilities.

J. Carter Walker, son of Captain Walker, and a graduate of the school, graduated from the University of Virginia in 1897. According to Elizabeth Copeland Norfleet in A Venture in Faith, a history of the school's early years, his plans to go on to law school were interrupted by his father's request that he serve as "head teacher." Carter Walker later explained his decision to his brother thus, "I always did what Father and Mother told me to."

J. Carter Walker served as headmaster until he retired in 1948. Headmasters since then have been:

A principal feature of life at Woodberry is its student-run honor system. A Prefect Board of roughly 18 senior students decide the fate of any students who "lie, cheat, or steal", and its decision is approved or vetoed (though rarely) by the headmaster and the dean of students. Anyone found violating the honor code on any scale is dismissed from the school. The Prefect Board is determined through a process involving students, faculty, and administration. In the spring trimester, an election among the students is held where students are given a roster of the rising senior class and asked to select the 19 they feel are best suited to the role. Faculty undertake a similar process, and later the administration interviews the individual candidates as determined by the initial elections. Finally, the headmaster decides the final composition of the board and they are announced publicly to the student body before the close of the year.

Aside from maintaining the honor system, the Prefect Board is charged with guiding the new students though orientation. Prefects also serve in roles similar to that of resident assistants, organizing dormitory events and informing students of news and events. A Senior Prefect is elected by the Prefect Board from among its members; his role is similar to that of a student body president, giving a speech at the assembly commencing the school year and at graduation in spring.

Woodberry, nicknamed the Tigers, competes in the Virginia Prep League in a variety of sports including basketball, soccer, baseball, golf, swimming, lacrosse, wrestling, cross country, tennis, and track, and football.

The longest-running high school football rivalry in the South takes place each year between Woodberry Forest and Episcopal High School of Alexandria, Virginia. The schools first played against each other in 1901 and have competed in over a hundred consecutive games. "The Game," as it is known, draws back many alumni and is considered the homecoming game for both schools. The 100th contest, which Woodberry won, took place in 2000, drew nearly 15,000 spectators, and was featured on ESPN. Before every game between the two schools, Woodberry has a bonfire reaching heights of four stories where the entire student body lines up to throw torches into a tower of logs. The bonfire draws nearly as many Woodberry fans as The Game itself.

Woodberry Forest's 117-year-old football program has been headed by Clinton Alexander since 2005. The Tigers send numerous players to play college football at all levels, including multiple NCAA Division I recruits each year.