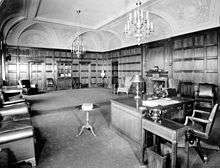 The Commerce Secretary's office as it looked in the mid-20th century.

Until 1913 there was one Secretary of Commerce and Labor, uniting this department with the Department of Labor, which is now headed by a separate Secretary of Labor.[2]

The 38th Secretary of Commerce is Penny Pritzker, who was appointed by President Barack Obama on June 26, 2013.[3]

The line of succession for the Secretary of Commerce is as follows:[4]