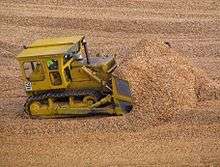 A bulldozer working the woodchip pile at Port Chalmers

Woodchipping in New Zealand is one of the sectors of the forestry industry and it attracted controversy in the 1990s when native trees were used as a source for the chipping.

The Ministry of Agriculture and Forestry collates figures on quantities of wood chip exports.

Since the settlement of New Zealand by Māori and then by Europeans has seen a loss of 75% of the indigenous forest cover. With European settlement in the 19th century large areas were cleared for pastoral farming and for logging. The export wood chip industry was as the main cause of forest clearance on private land after 1970 and by the 1980s 95% of forest loss was due to wood chipping. The native forest were replanted with plantations of fast growing species such as Pinus radiata.[2]

After protests from environmentalists the exporting of wood chips from indigenous forests was stopped by the government in 1996.[3]