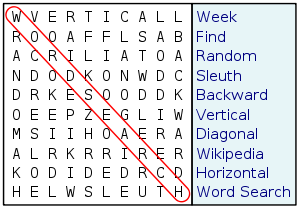 A word search, word find, word seek, word sleuth or mystery word puzzle is a word game that consists of the letters of words placed in a grid, which usually has a rectangular or square shape. The objective of this puzzle is to find and mark all the words hidden inside the box. The words may be placed horizontally, vertically, or diagonally. Often a list of the hidden words is provided, but more challenging puzzles may let the player figure them out. Many word search puzzles have a theme to which all the hidden words are related. The puzzles have, like crosswords and arrowords, been very popular in the United Kingdom, and - also in common with these latter puzzles - have had complete magazines devoted to them.

Word searches are commonly found in daily newspapers and puzzle books. Some teachers use them as educational tools for children, the benefit being that young minds can learn new words and their spellings by intensively searching for them, letter by letter, in the puzzle.

A common strategy for finding all the words is to go through the puzzle left to right (or vice versa) and look for the first letter of the word (if a word list is provided). After finding the letter, one should look at the eight surrounding letters to see whether the next letter of the word is there. One can then continue this method until the entire word is found.

Another strategy is to look for 'outstanding' letters within the word one is searching for (if a word list is provided). Since most word searches use capital letters, it is easiest to spot the letters that stand out from others. These letters are Q, O, U, X, and Z.

Lastly, the strategy of looking for double letters in the word being searched for (if a word list is provided) proves helpful, because it is easier to spot two identical side-by-side letters among a large grid of random letters.

If a word list is not provided, a way to find words is to go row by row. First, all the horizontal rows should be read both backwards and forwards, then the vertical, and so on.

The word search puzzle (also known as WordSeek, WordFind, WonderWord, etc.) was originally designed and published by Norman E. Gibat in the Selenby Digest on March 1, 1968 in Norman, Oklahoma, although the Spanish puzzle creator Pedro Ocón de Oro was publishing "Sopas de letras" (Spanish "Soup of Letters") before that date.

Selenby was a small want-ad digest distributed free at Safeway and other stores in the town. The original page size is 8.5 by 5.5 inches.

The puzzle was very popular locally and several more followed this original. Some teachers in the Norman schools asked for reprints to use in their classes. One teacher sent them around the country to various friends in other schools. Undoubtedly one of these scattered copies eventually led somebody to sell the idea to a syndicator.

Word search puzzles have become very popular on the internet with Facebook games such as Letters of Gold. Other digital and tabletop word search games include A Way with Words, Boggle, Bookworm, Letterpress, Outworded, Puzzlage, Ruzzle, Wonderword, Wordament, WordSpot, Word Streak with Friends, and Word Winder.

Sometimes secret messages are hidden in the word search.[1] In one variation, the secret message is created by all the words that are written backwards in the puzzle. In another variation, the secret message is created by the letters that are not used in any word within the puzzle. This variation is more common in more difficult puzzles where most letters are used. Kappa Publishing is well known for this. Their Magazines are called " The Magazine with the Last Message" or other saying that is related.

Another type of word search puzzle contains a trivia question at the bottom. Like a traditional word search puzzle, words from a word list must be circled or crossed through in the puzzle. There is also one or more extra word or phrase hidden in the puzzle that is not in the word list. This word or phrase usually answers the trivia question at the bottom of the page.

Some word search puzzles are snaking puzzles, in which the word is not a straight vertical, horizontal,or diagonal line, but "bends" at 90 degrees at any given letter. These are much more difficult than conventional puzzles. The difficulty level is further heightened when the next letter can be at 45 degrees, and using the same letter more than once is permitted, too.

Word search puzzles are often used in a teaching or classroom environment, especially in language and foreign language classrooms. Some teachers, particularly those specializing in English as a Second Language (ESL), use word search puzzles as an instructional tool. Other teachers use them as a recreational activity for students, instead.

On a more advanced level, word searches are good ways to demonstrate the use of searching algorithms, a concept essential in the development of artificial intelligence agents.