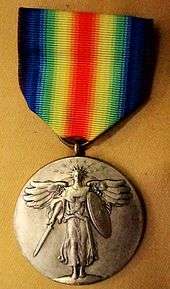 The World War I Victory Medal is a service medal of the United States military which was first created in 1919, designed by James Earle Fraser. The medal was originally intended to be created due to an act of the United States Congress, however the bill authorizing the medal never passed, leaving the service departments to create the award through general orders. The United States Army published orders authorizing the World War I Victory Medal in April 1919 and the U.S. Navy followed in June of that same year.[1][2]

The front of the bronze medal features a winged Victory holding a shield and sword on the front. The back of the bronze medal features "The Great War For Civilization" in all capital letters curved along the top of the medal. Curved along the bottom of the back of the medal are six stars, three on either side of the center column of seven staffs wrapped in a cord. The top of the staff has a round ball on top and is winged on the side. The staff is on top of a shield that says "U" on the left side of the staff and "S" on the right side of the staff. On left side of the staff it lists one World War I Allied country per line: France, Italy, Serbia, Japan, Montenegro, Russia, and Greece. On the right side of the staff the Allied country names read: Great Britain, Belgium, Brazil, Portugal, Rumania (spelled with a U instead of an O as it is spelled now), and China.

The following battle clasps, inscribed with a battle's name, were worn on the medal to denote participation in major ground conflicts.[1]

For general defense service, not involving a specific battle, the "Defensive Sector" Battle Clasp was authorized. The clasp was also awarded for any battle which was not already recognized by its own battle clasp.

The World War I Victory Medal bears the clasps of the battles the U.S. Army participated in across the ribbon. Not all battles are shown on the bar clasps. Only the battles designated as battles that would have bars issued were shown on the medal. The famous Battle of Chateau Thierry to hold the Chateau and the bridge as a joint effort between the US Army and the US Marines against the German machine gunners did not get awarded clasps.

The Defensive Sector Clasp was also authorized for Navy personnel who had participated in naval combat but were not authorized a particular battle clasp.

For sea-related war duty, the Navy issued the following operational clasps, which were worn on the World War I Victory Medal and inscribed with the name of the duty type which had been performed:[2]

Unlike the army, the navy only allowed one clasp of any type to be worn on the ribbon. Members of the marine or medical corps who served in France but was not eligible for a battle clasp would receive a bronze Maltese cross on their ribbons.[2]

Medals issued to U.S. Marines were issued with a Maltese cross device affixed to the ribbon.

The World War I Victory Medals were awarded after the end of World War I, so they were mailed to the servicemen instead of awarded in person. For example, the boxes containing the Victory Medals for United States Army World War I veterans were mailed out by the depot officer at the General Supply Depot, U.S. Army, in Philadelphia, Pennsylvania, in April 1921. An outer light brown box with an address label glued to it and its postage area marked "OFFICIAL BUSINESS, Penalty for private use $300" contained an inner white box stamped with the bars the serviceman was supposed to receive on his medal. The inner white box contained the medal, which was wrapped in tissue paper.

Only after filling out the application form A.G.O. No. 740 with the help of an authorized officer could it be officially forwarded to the Philadelphia Quartermaster Intermediate Depot for the veteran then to receive his medal by mail. The Army's started issuing Victory Medals on June 21, 1920 not April 1921 as listed above, The Navy had a late start due to production issues and started in August of 1920.[5]

Not only did the United States issue a Victory Medal, but so did a significant number of Allied and associated countries involved in the conflict against the Dual Alliance between Austria and Germany.

The proposition of such a common award was first made by French Maréchal Ferdinand Foch who was supreme commander of the Allied Forces during the First World War. Each medal in bronze has the same diameter (36 mm) and ribbon (double rainbow), but with a national design representing a winged victory.1[lower-alpha 1]