Not to be confused with International Youth Day or World Festival of Youth and Students.

World Youth Day (WYD) is an event for young people organized every three (or sometimes, two) years by the Catholic Church. The next occasion, World Youth Day 2019, will be held in 2019 in Panama.

World Youth Day was initiated by Pope John Paul II in 1985. For the first celebration of WYD in 1986, bishops all over the world were invited to schedule an annual youth event to be held every Palm Sunday in their dioceses. It is celebrated at the diocesan level annually, and at the international level every two to three years at different locations. The 1995 World Youth Day closing Mass in the Philippines set a world record for the largest number of people gathered for a single religious event (with 5 million attendees)— a record surpassed when 6 million attended a Mass celebrated by Pope Francis in the Philippines 20 years later in 2015.

Map of World Youth Day locations. Countries that have hosted at least one WYD are shaded green.

World Youth Day is commonly celebrated in a way similar to many events. The most emphasized and well known traditional theme is the unity and presence of numerous different cultures. Flags and other national declarations are displayed among, mainly young people to show their attendance at the events and proclaim their own themes of Catholicism. Such is usually done through chants and singing of other national songs involving a Catholic theme.

Over the course of the major events taking place, national objects are traded between pilgrims. Flags, shirts, crosses, and other Catholic icons are carried amongst pilgrims which are later traded as souvenirs to other people from different countries of the world. A unity of acceptance among people is also common, with all different cultures coming together to appreciate one another.

Other widely recognized traditions include the Pope's public appearance, commencing with his arrival around the city in the "Popemobile" and then with his final Mass held at the event. A festival in Sydney recorded an estimated distance of a 10-kilometre walk as roads and other public transport systems were closed off.

Pope Benedict XVI criticized the tendency to view WYD as a kind of rock festival; he stressed that the event should not be considered a "variant of modern youth culture" but as the fruition of a "long exterior and interior path".[1]

At WYD 1995, 5 million youths gathered at Luneta Park in Manila, Philippines, an event recognized as the largest crowd ever by the Guinness World Records.[2] In an initial comment immediately following the event, Cardinal Angelo Amato, Prefect of the Congregation for the Causes of Saints, stated that over 4 million people had participated.[3]

1997 WYD was held in Paris, France. 2000 WYD took place in Rome, Italy. 2002 WYD was held in Toronto, Canada. 2005 WYD was celebrated in Cologne, Germany. Thomas Gabriel composed for the final Mass on 21 August 2005 the Missa mundi (Mass of the world), representing five continents in style and instrumentation, in a European Kyrie influenced by the style of Bach, a South American Gloria with guitars and pan flutes, an Asian Credo with sitar, an African Sanctus with drums, and an Australian Agnus Dei with didgeridoos.[4]

Sydney, Australia, was chosen as the host of the 2008 World Youth Day celebrations. At the time it was announced in 2005, WYD 2008 was commended by the then Prime Minister of Australia, John Howard, and the Archbishop of Sydney, Cardinal George Pell.[5] World Youth Day 2008 was held in Sydney, with the Papal Mass held on the Sunday at Randwick Racecourse.

The week saw pilgrims from all continents participate in the Days in the Diocese program hosted by Catholic dioceses throughout Australia and New Zealand. Pope Benedict XVI arrived in Sydney on 13 July 2008 at Richmond Air Force Base. Cardinal Pell celebrated the Opening Mass at Barangaroo (East Darling Harbour) with other activities including the re-enactment of Christ's passion during the Stations of the Cross and the pope's boat cruise through Sydney Harbour. Pilgrims participated in a variety of youth festivities including visits to St Mary's Cathedral, daily catechesis and Mass led by bishops from around the world, concerts, visits to the tomb of Saint Mary MacKillop, the Vocations Expo at Darling Harbour, received the Sacrament of Reconciliation and praying before the Blessed Sacrament during Adoration. The Mass and concert at Barangaroo saw an estimated crowd of 150,000.

Crowd at Barangaroo, Sydney, for first day of WYD08 celebrations

In May 2007, it was reported that Guy Sebastian's song "Receive the Power" had been chosen as official anthem for World Youth Day (WYD08) to be held in Sydney in 2008. The song was co-written by Guy Sebastian and Gary Pinto, with vocals by Paulini.[7][8]

"Receive the Power"[9] was used extensively throughout the six days of World Youth Day in July 2008 and also in worldwide television coverage.[10]

Following the celebration of Holy Mass at Randwick Racecourse in Sydney on 20 July 2008, Pope Benedict XVI announced that the next International World Youth Day 2011 would be held in Madrid, Spain. This event was held from 16–21 August 2011.

There were nine official patron saints[12] for World Youth Day 2011 in addition to Blessed John Paul II: St. Isidore, St. John of the Cross, St. María de la Cabeza, St. John of Ávila, St. Teresa of Ávila, St. Rose of Lima, St. Ignatius of Loyola, St. Rafael Arnáiz and St. Francis Xavier, patron of world missions. During his address to seminarians, Benedict announced that the Spanish mystic and patron of Spanish diocesan clerics St. John of Ávila would become a "Doctor of the Church",[13] a designation granted to only 34 saints throughout the twenty centuries of Church history.

An estimated 2,000,000 people attended an all-night vigil to complete the week, more than expected. 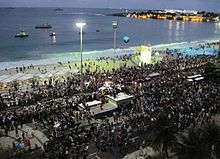 Pope Francis announced at the end of closing Mass for World Youth Day 2013 that Kraków, Poland would be the venue for World Youth Day 2016.[14] An estimated three million people attended. Young people from many different countries around the world took part in the week long event which began on 25th July 2016 and ended on 31st July 2016 with an open air mass led by Pope Francis at Campus Misericordiae where he announced that the next World Youth Day will take place in Panama, Central America in 2019. The theme for this year's World Youth Day was "Blessed Are The Merciful, For They Shall Obtain Mercy". This very much fit in with the Year of Mercy which was initiated by Pope Francis on 8th December 2015 and will run until 20th November 2016.

Note 01Attendance numbers reflect the total number at the closing Mass which includes many locals who attended only that one event. Unless otherwise referenced, the numbers are quoted from the USCCB website. Note 02This lists languages used in the main international version of the anthem. Local versions of the anthem in other languages (and alternate versions) may have also been produced.

At the diocesan level celebrations are decided by a local team usually appointed by the ordinary.

Since these celebrations usually occur during Palm Sunday, it almost always includes the Mass of Passion Sunday – when Jesus' entry to Jerusalem in his final days is commemorated.

Music, prayer, reconciliation opportunities, as well as adoration of the Blessed Sacrament may also be part of the celebrations.