This is a list of the largest historic peaceful gatherings of people in one place for a single event. For brevity, only gatherings in excess of 1 million are recorded.

An estimated 30 million people visited the Allahabad Kumbh Mela on a single day: 10 February 2013, the day of Mauni Amavasya 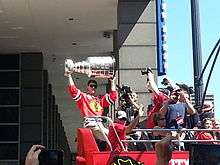 One to two million

One method of determining how many people are at an event is the scientific analysis of photographs, video images, or both. Based on the quality of the image, it is possible to do a physical head count or to estimate attendance based on the density of people within similar areas. This permits the estimation of people over large areas or where parts of the image are obscured. An extensive discussion of how images were used to estimate the number of attendees at the Million Man March can be found at the Center for Remote Sensing at Boston University's website.[126]