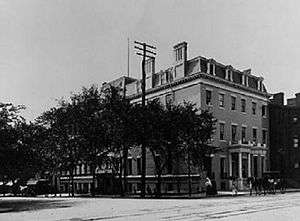 Wormley's Hotel was a five-story hotel at 1500 H Street, NW, Washington D.C. The hotel was owned by James Wormley, a free-born black man who had spent time in Europe learning fine culinary skills. The hotel was the site of the Wormley Agreement, which led to the Compromise of 1877 and the election of President Rutherford B. Hayes. The hotel was later demolished and the Union Trust Company built on its site in 1906.