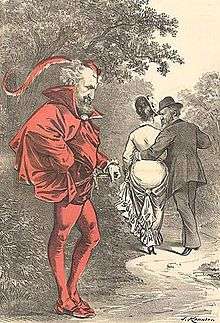 A political cartoon by Joseph Keppler depicts Roscoe Conkling as a character Mephistopheles (the Devil) while Rutherford B. Hayes strolls off with the prize of the "Solid South" depicted as a woman. The caption quotes Goethe: "Unto that Power he doth belong Which only doeth Right while ever willing Wrong."

The Compromise of 1877 was a purported informal, unwritten deal that settled the intensely disputed 1876 U.S. presidential election. It resulted in the national government pulling the last federal troops out of the South, and formally ended the Reconstruction Era. Through the Compromise, Republican Rutherford B. Hayes was awarded the White House over Democrat Samuel J. Tilden on the understanding that Hayes would remove the federal troops whose support was essential for the survival of Republican state governments in South Carolina, Florida and Louisiana. The compromise involved Democrats who controlled the House of Representatives allowing the decision of the Electoral Commission to take effect. The outgoing president, Republican Ulysses S. Grant, removed the soldiers from Florida. As president, Hayes removed the remaining troops from South Carolina and Louisiana. As soon as the troops left, many white Republicans also left, and the "Redeemer" Democrats took control. They already dominated most other state governments in the South. What was exactly agreed is somewhat contested as the documentation is scanty.[1]

Black Republicans felt betrayed as they lost power and were subject to discrimination and harassment to suppress their voting. At the turn of the 20th century, most black people were effectively disenfranchised by state legislatures in every southern state, despite being a majority in some.[2]

The compromise essentially stated that Southern Democrats would acknowledge Hayes as president, but only on the understanding that Republicans would meet certain demands. The following elements are generally said to be the points of the compromise:[3]

In exchange, Democrats would accept the Republican Hayes as president by not employing the filibuster during the joint session of Congress needed to confirm the election.[4][5]

After the Compromise, a few Democrats complained loudly that Tilden had been cheated. There was talk of forming armed units that would march on Washington, but President Grant was ready for that. He beefed up military security, and no one marched on Washington.[6]

Hayes was peacefully inaugurated. Points 1 and 2 of the compromise took effect. Hayes had already announced his support for the restoration of "home rule," which would involve federal troop removal, before the election. It was not unusual, nor unexpected, for a president, especially one so narrowly elected, to select a cabinet member favored by the other party. Points 3 and 4 were never enacted; it is possible there was no firm agreement about them.

Whether by informal deal or simply reassurances already in line with Hayes's announced plans, talks with Southern Democrats satisfied the worries of many. This prevented a Congressional filibuster that had threatened to extend resolution of the election dispute beyond Inauguration Day 1877.[7]

C. Vann Woodward (1951) argued for an economic interpretation, saying that emerging business and industry interests of the New South found common ground with Republican businessmen, particularly the railroads. They met secretly at Wormley's Hotel in Washington to forge a compromise with aid to internal improvements: bridges, canals and railroads wanted by the South. But Peskin notes that no serious federal effort was made after Hayes took office to fund a railroad or provide other federal aid for improvements.[8] An opposing interest group representing the Southern Pacific actually thwarted Scott's proposed Texas and Pacific scheme, and ultimately ran its own line to New Orleans.

Some historians, such as Allan Peskin, argue that the assurances offered to some Southern Democrats to prevent a filibuster were not a "compromise" but a foregone conclusion, as Tilden did not command sufficient support.[8] Peskin admits that Woodward's interpretation had become almost universally accepted in the nearly quarter century since he had published it. As not all terms of the agreement were met, Peskin believes there was really no deal between the North and South in 1877. He also suggests that Northern Democrats were more significant in quashing the filibuster than those from the South. For instance, Samuel J. Randall (D-Pennsylvania) was Speaker of the House and prevented the filibuster. He was more interested in ensuring that the Radical government in Louisiana was abandoned than in any southern railroad.[8]

Vincent DeSantis argues that the Republican Party abandoned Southern blacks to the rule of the racist Democratic Party in order to gain the support of Democrats for Hayes' presidency.[9]

In any case, Reconstruction ended. The dominance of the Democratic Party in the South was cemented with the ascent of the "Redeemer" governments that displaced the Republican governments. After 1877, support for white supremacy generally caused whites to vote for Democrats and the region became known as the "Solid South." Until the end of the 19th century, black Republicans continued to elect numerous candidates to local office, although Democrats controlled most state representative and statewide seats, except for a brief period of fusion governments supported by Republicans and Populists. The majority white voters supported national Democratic candidates well into the 20th century before shifting to the Republican Party. This later shift to the Republican party followed President Lyndon B. Johnson's [Dem.], the Republicans' majority, and the Northern Democrats' support for the Civil Rights Act of 1964. Democratic groups worked to suppress black voting by intimidation and fraud but, after regaining power again at the turn of the 20th century, passed constitutions and laws to disenfranchise blacks by law, as well as many poor whites in states such as Alabama and others. As there was no change in congressional apportionment, southern whites accrued great power by controlling all the seats of the region based on states' total populations.

In The Mexicanization of American Politics: The United States' Transnational Path from Civil War to Stabilization (2012), Downs rejects the idea that this was an era of easy reconciliation and political stability. Instead he shows many Americans feared "Mexicanization" of politics, whereby force would be used to settle a presidential election, as force had been used to settle certain state elections in the South. Downs explores how Mexicanization was roundly rejected and stability was achieved.

Whatever "deals" may or may not have taken place on the side, in formal legal terms, the election of 1876 was not decided by such acts, but by the official vote of Congress to accept the recommendations of the Electoral Commission they themselves had set up as a way out of the election impasse. The expectation in setting up the committee had been that its decisions would be accepted by Congress. It was only when certain Democrats disagreed with the commission's decisions in favor of Hayes that this arrangement was jeopardized. This Democratic group threatened a filibuster (opposed by Republicans and Congressional Democratic leadership as well) that would prevent the agreed-upon vote from taking place. Discussions of the points in the alleged "compromise" were related to persuading key Democrats against accepting a filibuster. The very threat of a filibuster—a measure used by a minority to prevent a vote—indicates that there were already sufficient votes for accepting the commission's recommendations.[10]