Xai-Xai, formerly João Belo, developed in the early 1900s, under Portuguese rule, as a companion port to Lourenço Marques (currently Maputo), though its economic significance was never on par with Mozambique's largest city.[2] Before independence from Portugal in 1975, Xai-Xai was known as João Belo, in the Overseas Province of Mozambique.[3] João Belo grew and developed under Portuguese rule as a port, agricultural and industrial centre (rice and cashew were harvested and processed), a provider of services, including a district hospital and banking, and an administrative centre. Tourism was also important with beaches and hotels.[4] In 1970, the city had 63,949 inhabitants.

After independence from Portugal

It was hit hard by 2000 floods of the Limpopo, with some buildings 3 metres (10 ft) under water.[5] However, shortly after the waters receded the town was opened for business again.[5]

Xai-Xai is a bustling town with markets, shops, restaurants, bars, petrol stations, banks, and a post office.[6] A few blocks from the central market, there is an open-air furniture factory, located underneath several cashew trees.[8] The beach of Praia do Xai-Xai, approximately 12 km from Xai-Xai, has been a popular tourist attraction since Mozambican tourism, originally under Portuguese administration, was first developed before 1975.[6] A coral reef running parallel to the shore offers good snorkeling and protects the beach from strong waves.[6] In addition, the Wenela Tidal Pool, 2 kilometres (1.2 mi) south of the town, includes a natural tunnel and blow hole that links the pool to the Indian Ocean.[6] 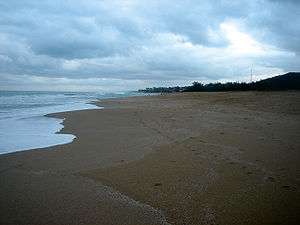 Xai Xai was served by the 762 mm (2 ft 6 in) gauge Gaza Railway, which went to the city of Manjacaze and beyond. It lies on the EN1 road which connects with the roads from the Namaacha and Ressano Garcia borders.[6] It is possible to travel to Xai-Xai by charter flight from Maputo.[6]