Not to be confused with the Bible study software called Xiphos, for which, see The SWORD Project. 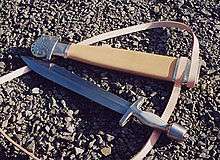 Modern reconstruction of a Greek xiphos and scabbard 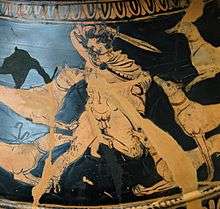 The xiphos (Greek: ξίφος)[1] is a double-edged, one-handed Iron Age straight shortsword used by the ancient Greeks. It was a secondary battlefield weapon for the Greek armies after the dory or javelin. The classic blade was generally about 50–60 cm long, although the Spartans supposedly started to use blades as short as 30 cm around the era of the Greco-Persian Wars. The xiphos sometimes has a midrib, or is diamond or lenticular in cross-section. It was generally hung from a baldric under the left arm.[2] The xiphos was generally used only when the spear was discarded for close combat. Very few xiphoi seem to have survived.

Stone's Glossary has the xiphos being a name used by Homer for a sword. The entry in the book says that the sword had a double-edged blade widest at about two-thirds of its length from the point, and ending in a very long point.[3] The name xiphos apparently means something in the way of "penetrating light" according to researcher and swordsmith Peter Johnsson.[2]

The xiphos' leaf-shaped design lent itself to both cutting and thrusting. The design has most likely been in existence since the appearance of the first swords. Blades in bronze and iron are suitable for a leaf shape due to the softness of the metals in comparison to steel. Bronze swords are cast and are thus more easily formed into a leaf shape than iron swords, which need to be forged. (Wrought iron is too soft to make a good sword, but many swords were still made in part or total from wrought iron.)

The early xiphos was a bronze sword. In the classical period it would have been made of iron. The early Celtic La Tène short sword, contemporary with the xiphos, had a virtually identical blade design as the xiphos.

The leaf-shaped short swords were not limited to Greece, as mentioned, but can be found throughout Europe in the late Bronze Age under various names. Bronze leaf-shaped swords from as early as the late second millennium still survive.[4] The Urnfield culture is associated with the use of the leaf shaped bronze short sword. It is generally thought that iron swords had replaced bronze swords by the early La Tène culture about 500BC. During the Halstatt culture a mixture of bronze and iron swords seem to have existed side by side. Iron tends to become severely oxidized (rusted) over the years, and few iron swords have survived, in contrast to bronze swords that age very well. Thus, much is known regarding the sword during the Bronze Age but less so in the early Iron Age. Bronze thrusting swords from the second millennium still exist in excellent condition.

The word is attested in Mycenaean Greek Linear B form as 𐀥𐀯𐀟𐀁, qi-si-pe-e.[n 1] A relation to Arabic saifun and Egyptian sēfet has been suggested, although this does not explain the presence of a labiovelar in Mycenaean.[12] One suggestion connects Ossetic äxsirf "sickle",[13] which would point to a virtual Indo-European *kwsibhro-.