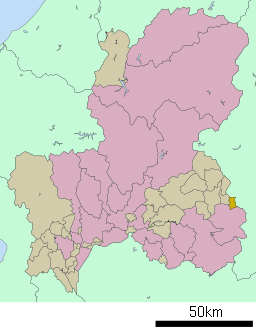 On February 13, 2005, Yamaguchi, along the towns of Fukuoka, Sakashita and Tsukechi, and the villages of Hirukawa, Kashimo and Kawaue (all from Ena District, Gifu Prefecture), was merged into the expanded city of Nakatsugawa in Gifu Prefecture and no longer exists as an independent municipality.[1]

This article is issued from Wikipedia - version of the 5/20/2015. The text is available under the Creative Commons Attribution/Share Alike but additional terms may apply for the media files.