Nakatsugawa (中津川市, Nakatsugawa-shi) is a city located in the Tōnō region of Gifu Prefecture, Japan. The city was founded on April 1, 1952. 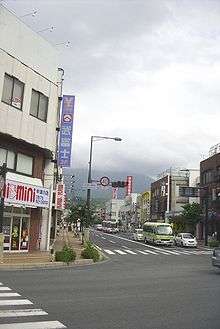 During Japan's Edo period, Nakatsugawa was a post town, known as Nakatsugawa-juku, one of the 69 Stations of the Nakasendō along the Nakasendō. The travel route ran from the Nihonbashi in Edo (modern-day Tokyo) to Sanjō Ōhashi in the imperial capital of Kyoto. It was one of the five major routes used in the Edo period, and one of two that connected Edo and Kyoto. Nakatsugawa is planned as a stop for the Chūō Shinkansen maglev train line.

On February 13, 2005, the towns of Tsukechi, Fukuoka and Sakashita and the villages of Hirukawa, Kashimo and Kawaue (all from the former Ena District), and the village of Yamaguchi (from Kiso District, Nagano Prefecture) were merged into Nakatsugawa.[3]

Following the merger, the city had an estimated population of 86,498 and a population density of 128 persons per km². The post-merger total area is 676.38 km².

The Japanese place a high priority on food, particularly during traveling and touring, and most regions in Japan are well known for their particular local delicacies. For the Japanese, sampling these on one's travels is considered one of the highlights of travel within Japan.

Nakatsugawa is known for its abundant chestnut harvest and the chestnut delicacies known as kurikinton (栗きんとん). Kurikinton are produced by first boiling and then mashing the chestnuts, then mixing them with sugar and reforming them into a chestnut shape. They are widely available during the Autumn months. Many families make their own in their own kitchens, while purchased kurikinton are extremely popular as well for home consumption and as gifts.

This article is issued from Wikipedia - version of the 11/9/2015. The text is available under the Creative Commons Attribution/Share Alike but additional terms may apply for the media files.