This article is about the mythical city. For other uses, see Ys (disambiguation). 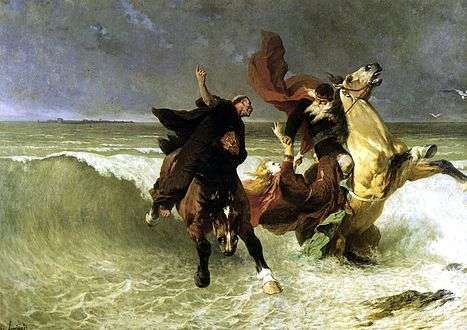 Ys (pronounced /ˈiːs/ EESS), also spelled Is or Kêr-Is in Breton (kêr means city in Breton), and Ville d'Ys in French, is a mythical city that was built on the coast of Brittany and later swallowed by the ocean. Most versions of the legend place the city in the Douarnenez Bay.

According to some versions of the legend, Ys was built below sea level by Gradlon (Gralon in Breton), King of Cornouaille (Kerne in Breton), upon the request of his daughter Dahut (also called Ahes), who loved the sea.

In others, Ys was founded more than 2,000 years before Gradlon's reign in a then-dry location off the current coast of the Bay of Douarnenez, but the Breton coast had slowly given way to the sea so that Ys was under it at each high tide when Gradlon's reign began.

To protect Ys from inundation, a dike was built with a gate that was opened for ships during low tide. The one key that opened the gate was held by the king.

One day, a knight dressed in red came to Ys. Dahut asked him to come with her, and one night, he agreed. A storm broke out in the middle of the night and the waves could be heard smashing against the gate and the bronze walls. Dahut said to the knight: "Let the storm rage. The gates of the city are strong, and it is King Gradlon, my father, who owns the only key, attached to his neck." The knight replied: "Your father the king sleeps. You can now easily take his key." Dahut stole the key from her father and gave it to the knight, who was none other than the devil. The devil, or, in another version of the story, a wine-besotted Dahut herself, then opened the gate.

Because the gate was open during storm and at high tide, a wave as high as a mountain collapsed on Ys. King Gradlon and his daughter climbed on Morvarc'h, his magical horse. Saint Winwaloe approached them and told Gradlon: "Push back the demon sitting behind you!" Gradlon initially refused, but he finally gave in and pushed his daughter into the sea. The sea swallowed Dahut, who became a mermaid or morgen.

Gradlon took refuge in Quimper, which became his new capital. An equestrian statue of Gradlon still stands between the spires of the Cathedral of Saint Corentin in Quimper. Folklore asserts that the bells of the churches of Ys can still be heard in the calm sea. A legend says that when Paris is swallowed, the city of Ys will rise up from under the waves: Pa vo beuzet Paris, Ec'h adsavo Ker Is (Par-Is meaning "similar to Ys" in Breton).

This history is also sometimes viewed as the victory of Christianity over druidism, as Gradlon was converted by Saint Winwaloe. Dahut and most inhabitants of Ys were worshippers of Celtic gods. However, another Breton folktale asserts that Gradlon met, spoke with and consoled the last Druid in Brittany, and oversaw his pagan burial, before building a chapel in his sacred grove.

Development of the legend

While legends and literature about Gradlon are much older, such as the Lai de Graelent by Marie de France probably written in the late 12th century, the story of Ys appears to have developed between the end of the fifteenth century and the seventeenth century. An early mention of Ys appears in Pierre Le Baud's Cronicques et ystoires des Bretons in which Gradlon is the king of the city, but Dahut is not mentioned. Bernard d'Argentre's La histoire de Bretagne and mystery plays on the life of St. Winwaloe, in the sixteenth century, also provide early references to the city.[1] The version of the story of Ys which appears in Albert Le Grand's Vie des Saincts de la Bretagne Armorique published in the seventeenth century already contains all the basic elements of the later story[2] and has been said to be the first.[3]

The legend of Ys was confined to the folk of Brittany until 1839, when T. Hersart de la Villemarqué published a collection of popular songs collected from oral tradition, the Barzaz Breizh. The collection achieved a wide distribution and brought Breton folk culture into European awareness. In the second edition, the poem "Livaden Geris" ("The Submersion of Ker-Is") appeared. The same basic story elements are present, but in this version the holy man is instead St. Corentin.

It appears that elements of the text of this version were adapted from the medieval Welsh poem "Seithennin" about the legend of Cantre'r Gwaelod, a very similar Welsh legend about a land that disappeared beneath the ocean as a result of human error. In this version, Dahut steals the key at the incitement of a lover. Also, here the element of Dahut as a mermaid or morgen has appeared as the last verses of the song refer to a fisherman seeing a mermaid combing her hair and singing a sad song.

Emile Souvestre's Le Foyer Breton also played a great part in making the legend widely known, and many 19th century English tellings of the story are closely derived from the Foyer Breton's tale "Keris". In Souvestre's telling, the character of the Devil disguised as a man with a red beard has appeared.[3]

Adaptations in the arts 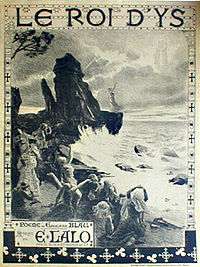 Le roi d'Ys, an opera by the French composer Édouard Lalo which premiered in 1888, transforms the story significantly, replacing the figure of Dahut with Margared, whose motive for opening the gates (with the aid of her own betrothed Karnac) is her jealousy at her sister Rozenn's marriage to Mylio (characters who are also inventions of Lalo).[4]

Also inspired by the story of Ys is Claude Debussy's La cathédrale engloutie, found in his first book of Preludes (published 1910). This is a prelude intended to evoke the atmosphere of the legend by its sound.[5]

The story is also an element in Alexander Blok's 1912 verse drama The Rose and the Cross.

The legend of Ys has been used repeatedly in fantasy fiction, prominently by Robert W. Chambers in "The Demoiselle d'Ys", one of the stories in The King in Yellow, Chambers' best-known work. The legend of Ys forms the basis for the plot of A. Merritt's novel Creep, Shadow! as a reincarnation of Dahut is one of the main antagonists. Poul Anderson and his wife Karen Anderson dealt with the legend in their The King of Ys tetralogy. Ys and other sunken/lost lands figure in Jack Vance's Lyonesse Trilogy. The sunken City of Ys is also mentioned in "Sword of Destiny", a book in "The Witcher" Saga written by Andrzej Sapkowski, and the manga Berserk. Terry Pratchett used the Legend of Ys as the basis for his Discworld novel Jingo. A version of the city is featured in John Brunner's The Traveller in Black'.

A. S. Byatt's novel Possession: A Romance, which won the 1990 Booker Prize, makes frequent reference to Breton myth and legend, including the story of Ys.

Italian progressive rock band Il Balletto di Bronzo loosely based their 37-minute opus on the story of Ys, naming both the piece and the 1972 album on which it appears after the city.

The Japanese game studio Falcom have a series of games called Ys, with the first game released in 1987.

Iman Wilkens claims, in his book Where Troy Once Stood, that the Trojan War and other events in Homer's epic poems the Iliad and the Odyssey took place in the Atlantic Ocean and the North Sea; he claims the city of Ismarus, sacked by Odysseus' men after leaving Troy, was in fact Ys. Wilkens' suggestions have not attracted the attention of mainstream scholars.

Claire Trévien uses the legend as the basis for her poem "Mère" in Low-Tide Lottery (Salt Publishing, 2011).

French singer-songwriter Gwennyn used this legend as the basis for the Breton-language song "Ahès" she wrote for Nolwenn Leroy, released on her 2012 album Ô Filles de l'eau.

Ys is the name of a boardgames published by Ystari Games. It is a medium complexity strategy game for 2-4 players. [6]

The Warlock of YS is an occasional adversary of Green Lantern, Zatanna, and both the JLA and JSA.

This audio file was created from a revision of the "Ys" article dated 2006-07-22, and does not reflect subsequent edits to the article. (Audio help)
More spoken articles
This article is issued from Wikipedia - version of the 11/18/2016. The text is available under the Creative Commons Attribution/Share Alike but additional terms may apply for the media files.