Yukio Endo (遠藤 幸雄, Endō Yukio, January 18, 1937 – March 25, 2009) was a Japanese artistic gymnast, Olympic champion and world champion. He was part of the first Japanese team that succeeded to win gold medals in the team event at the Summer Olympics (1960) and World Championships (1962). In 1964 he won the first individual all-around Olympic gold medal for Japan. He was the flag bearer at the 1968 Summer Olympics.[1] 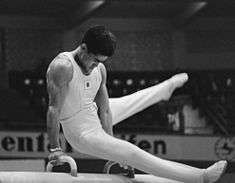 Endo was born in a family of pharmacists, but his mother died from tuberculosis when he was nine. He studied at Akita Technical High School and than at the Tokyo University of Education (now the University of Tsukuba), graduating in 1959. He later worked as assistant instructor of physical education at Nihon University.[1]

He retired after the 1968 Olympics to become a gymnastics coach and eventually professor at Nihon University. He also coached the national team at the 1972 Olympics, acted as director of the Japanese Olympic Committee and was twice appointed as vice-president of the Japan Gymnastic Association. In 1996, he received the Japanese Emperor's Medal, and in 1999 induced into the International Gymnastics Hall of Fame.[6][1]

He died of esophageal cancer.