The 1968 Summer Olympics (Spanish: Juegos Olímpicos de Verano de 1968), officially known as the Games of the XIX Olympiad, were an international multi-sport event held in Mexico City, Mexico, in October 1968.

These were the first Olympic Games to be staged in Latin America and the first to be staged in a Spanish-speaking country. They were also the first Games to use an all-weather (smooth) track for track and field events instead of the traditional cinder track.

The 1968 Games were the third to be held in the last quarter of the year, after the 1956 Games in Melbourne and the 1964 Games in Tokyo. The Mexican Student Movement of 1968 happened concurrently and the Olympic Games were correlated to the government's repression. 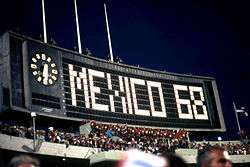 On October 18, 1963, at the 60th IOC Session in Baden-Baden, West Germany, Mexico City finished ahead of bids from Detroit, Buenos Aires and Lyon to host the Games.[1]

The 1968 torch relay recreated the route taken by Christopher Columbus to the New World, journeying from Greece through Italy and Spain to San Salvador Island, Bahamas, and then on to Mexico. American sculptor James Metcalf, an expatriate in Mexico, won the commission to forge the Olympic torch for the 1968 Summer Games.[3]

South Africa was provisionally invited to the Games, on the understanding that all segregation and discrimination in sport would be eliminated by the 1972 Games. However, African countries and black American athletes promised to boycott the Games if South Africa was present, and Eastern Bloc countries threatened to do likewise. In April 1968 the IOC conceded that "it would be most unwise for South Africa to participate".[6]

Responding to growing social unrest and protests, the government of Mexico had increased economic and political suppression, against labor unions in particular, in the decade building up to the Olympics. A series of protest marches in the city in August gathered significant attendance, with an estimated 500,000 taking part on August 27. President Gustavo Díaz Ordaz ordered the occupation of the National Autonomous University of Mexico in September, but protests continued. Using the prominence brought by the Olympics, students gathered in Plaza de las Tres Culturas in Tlatelolco to call for greater civil and democratic rights and showed disdain for the Olympics with slogans such as ¡No queremos olimpiadas, queremos revolución! ("We don't want Olympics, we want revolution!").[7][8]

Ten days before the start of the Olympics, the government ordered the gathering in Plaza de las Tres Culturas to be broken up. Some 5000 soldiers and 200 tankettes surrounded the plaza. Hundreds of protesters and civilians were killed and over 1000 were arrested. At the time, the event was portrayed in the national media as the military suppression of a violent student uprising, but later analysis indicates that the gathering was peaceful prior to the army's advance.[9][10][11] 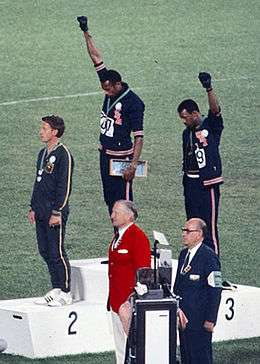 On October 16, 1968, black American sprinters Tommie Smith and John Carlos, the gold and bronze medalists in the men's 200-meter race, took their places on the podium for the medal ceremony wearing black socks without shoes and civil rights badges, lowered their heads and each defiantly raised a black-gloved fist as the Star Spangled Banner was played in solidarity with the Black Freedom Movement in the United States. Both were members of the Olympic Project for Human Rights. Some people (particularly IOC president Avery Brundage) felt that a political statement had no place in the international forum of the Olympic Games. In an immediate response to their actions, Smith and Carlos were suspended from the U.S. team by Brundage and banned from the Olympic Village. Those who opposed the protest said the actions disgraced all Americans. Supporters, on the other hand, praised the men for their bravery.

Peter Norman, the Australian sprinter who came second in the 200 m race, also wore an Olympic Project for Human Rights badge during the medal ceremony. Norman was the one who suggested that Carlos and Smith wear one glove each. His actions resulted in him being ostracized by Australian media[12] and a reprimand by his country's Olympic authorities, who did not send him or any other male sprinters at all to the 1972 games (despite easily making the qualifying time).[13] When Australia hosted the 2000 Summer Olympics, he was not invited to join other Australian medallists at the opening ceremony. In 2006, after Norman died of a heart attack, Smith and Carlos were pallbearers at Norman's funeral.[14]

In another incident, while standing on the medal podium after the balance beam event final where Natalia Kuchinskaya of the Soviet Union had controversially taken the Gold, Czechoslovakian gymnast Věra Čáslavská quietly turned her head down and away during the playing of the Soviet national anthem. The action was Čáslavská's silent protest against the recent Soviet invasion of Czechoslovakia, and was repeated when she accepted her medal for her floor exercise routine when the judges changed the preliminary scores of the Soviet Larisa Petrik to tie with Čáslavská. While Čáslavská's countrymen supported her actions and her outspoken opposition to Communism (she had publicly signed and supported Ludvik Vaculik's "Two Thousand Words" manifesto), the new regime responded by banning her from both sporting events and international travel for many years and made her an outcast from society.

According to The Oxford Olympics Study data are not available to establish the cost of the Mexico City 1968 Summer Olympics.[15] Average cost for Summer Games since 1960, for which data are available, is USD 5.2 billion.

The 1968 Summer Olympic program featured 172 events in the following 18 sports:

The organizers declined to hold a judo tournament at the Olympics, even though it had been a full-medal sport four years earlier. This was the last time judo was not included in the Olympic games.

All dates are in Central Time Zone (UTC-6)

Number of athletes per country

East Germany and West Germany competed as separate entities for the first time in at a Summer Olympiad, and would remain so through 1988. Barbados competed for the first time as an independent country. Also competing for the first time in a Summer Olympiad were British Honduras (now Belize), Central African Republic, Democratic Republic of the Congo (as Congo-Kinshasa), El Salvador, Guinea, Honduras, Kuwait, Nicaragua, Paraguay, Sierra Leone, and the United States Virgin Islands. Singapore returned to the Games as an independent country after competing as part of the Malaysian team in 1964. Suriname and Libya actually competed for the first time (in 1960 and 1964, respectively, they took part in the Opening Ceremony, but their athletes withdrew from competition.)

These are the top ten nations that won medals at the 1968 Games. Host Mexico won 3 of each color of medal.