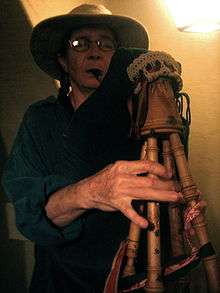 Zampogna (pronounced [dzamˈpoɲɲa] or [tsamˈpoɲɲa]) is a generic term for a number of Italian double chantered pipes that can be found as far north as the southern part of the Marche, throughout areas in Abruzzo, Latium, Molise, Basilicata, Campania, Calabria, and Sicily. The tradition is now mostly associated with Christmas, and the most famous Italian carol, "Tu scendi dalle stelle" (You Come Down From the Stars) is derived from traditional zampogna music. However, there is an ongoing resurgence of the instrument in secular use seen with the increasing number of folk music festivals and folk music ensembles.

All chanters and drones are fixed into a single round stock that the bag is attached to. Each chanter is tuned differently, according to the tradition it represents, and there are dozens. Typically, the double-reeded versions (Marche, Abruzzo, Latium, Campania, southern Basilicata and parts of Sicily and southern Calabria) will have a soprano chanter on the right and a bass chanter on the left (called, respectively, "ritta" and "manga" — meaning 'right' and 'left' — in the Ciociaro tradition) with an alto drone (bordone being the generic name); but as many as three drones, the other tuned above and below the basic chord can be used, or, in the case of the Marches tradition, no drones at all.

The single reed versions consist of the "surdullina" types of the Province of Cosenza and Catanzaro, and the ciaramella or ciaramedda of Messina and Catania in Sicily, as well as in Southern Calabria. The surdullina is a very short chantered version of the instrument that is used to play tarantellas primarily, while the ciaramedda can play all of the traditional regional melodies the other types can.

Traditionally the bags are made from goat hides that are removed from the slaughtered animal in one piece, cured, turned inside out, then tied off just in front of the rear legs, one of the front legs serving to house the blow pipe with its simple leather valve (soffietto), and the other tied off. The typical round stock into which both chanters and drones are fixed goes into the neck of the skin. The hair is left on, and is contained in the inside of the bag (otre). Today, however, some pipers are substituting the traditional goat and sheep hide bags with a rubber inner tube or wintex which is covered with an artificial fleece. This practice of using the synthetic bag is particularly popular among the pipers from Scapoli in the Molise region, and those of Atina in Latium. 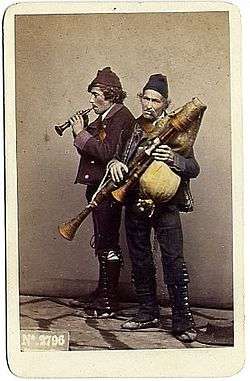 The double reeded version of the Zampogna is generally played with the piffero (called "biffera" in the Ciociaria, or "ciaramella" or "pipita" in other regions]; a shawm, or folk oboe), which plays the melody and the zampogna provides chord changes, "vamping" or rhythmic harmony figures or a bass line and a soprano harmony as accompaniment. This double reed tradition would include the Ciociaria (Latium, southern Abruzzo and Molise), that of southern Basilicata (Pollino) and nearby areas of Calabria, and some areas of Sicily (Siracusa, Palermo). Single reed versions are played solo in the Calabrian tradition of the surdullina (Cosenza), and a version with a plugged chanter called the "surdullina Albanese," and the Sicilian ciaramedda or ciaramèddha (Catania, Messina, and Reggio Calabria). The chanters and drones vary, according to the tradition, from a few inches long (surdullina) to nearly two meters in length, such as used in the cathedral of Monreale (Palermo) and nearly every size in between. The pipes are related to the Sardinian launeddas, a single reed "triple clarinet" comprising two chanters and a drone and played in the mouth by circular breathing.

The word "zampogna" is etymologically related to the Greek sumfōnia (Greek: συμφωνία), meaning "concord or unison of sound"[1] (from σῠν- sun-, "with, together" + φωνή phōnḗ, "sound") and applied later to a type of bagpipe.[2] It cognates to tsampouna, the word for the Greek island bagpipe, itself a reborrowing of zampogna.[3] Its Romanian counterpart is cimpoi, which means "symphony" or "many sounds played together" and Georgian čiboni.