For other places with the same name, see Łęczyca (disambiguation).

Łęczyca [wɛnˈt͡ʂɨt͡sa] (in full The Royal Town of Łęczyca; Polish: Królewskie Miasto Łęczyca; Hebrew: לונטשיץ‎‎) is a town of 16,594 inhabitants (as of 2005) in central Poland. Situated in the Łódź Voivodeship, it is the county seat of the Łęczyca County.

Origin of the Name

The town was probably named after a Slavic tribe called Leczanie, which inhabited central Poland in the early Middle Ages. Some scholars however claim that the town was named after an Old Polish word leg or luk, which means a swampy plain.

In mediaeval Latin documents, Łęczyca is called Lonsin, Lucic, Lunciz, Lantsiza, Loncizia, Lonsitia and Lunchicia. In the early 12th century, Gallus Anonymus called Łęczyca “Lucic”, and in 1154, Arab geographer Muhammad al-Idrisi named it Nugrada, placing it among other main towns of the Kingdom of Poland, such as Kraków, Sieradz, Gniezno, Wrocław and Santok.

Łęczyca lies in the middle of the county, and has the area of 8.95 km2 (3.46 square miles). In the past, the town was the capital of the Land of Łęczyca, which was later turned into Łęczyca Voivodeship. In the Second Polish Republic and in 1945 - 1975, Łęczyca belonged to Lodz Voivodeship. In 1975-1998, it was part of Plock Voivodeship. The geometric centre of Poland is located near Łęczyca. 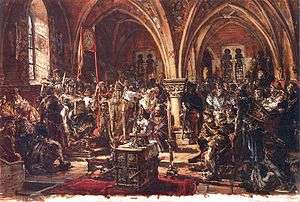 Łęczyca is one of the oldest Polish cities, mentioned in the 12th century. It was the place of the first recorded meeting of Sejm, the Polish parliament, in 1182. In 1229 it became the capital of the Duchy of Łęczyca (see Testament of Boleslaw III Krzywousty), which in 1263 was split into two parts - the Duchy of Łęczyca and the Duchy of Sieradz. In the early 14th century, the Łęczyca Voivodeship was created. This administrative unit of the Kingdom of Poland existed until the Partitions of Poland in the late 18th century.

Łęczyca, which lies in the centre of Poland, was for centuries one of the most important cities of the country. It received Magdeburg rights before 1267, and in 1331 the Teutonic Knights sacked the city during one of their repeated incursions into Poland. A considerable number of buildings were burned down, including two churches. A few decades later, on the initiative of Kazimierz the Great, the city was walled and a castle built to the southeast of the city.[1]

Łęczyca prospered in the period between the mid-14th and mid-17th centuries. The royal castle, built by Kazimierz Wielki, was located on a small hill, protected by a moat with water from the Bzura river. The complex was made from red brick, set on stone foundations. It was protected by a 10-meter high wall, with a tower located in its southwestern corner. Gate tower was placed in the western wall, in the basement was a prison, and in the courtyard there was a two-storey tenement building. Rooms of that building frequently housed meetings of the Royal Council. In 1964, widespread renovation of the complex began. Another building was added at that time, which now houses the Museum of the Land of Łęczyca.

Soon after its completion in the mid-14th century, the castle was named one of royal residences, and the seat of the Starosta of Łęczyca. In 1406, it was burned by the Teutonic Knights, but the complex was rebuilt so quickly that in 1409, King Władysław Jagiełło attended here a meeting of his advisors, discussing the oncoming war with the Knights.

Following the Battle of Grunwald (1410), a number of high-ranking Teutonic prisoners was kept here for ransom. Four sessions of the Sejm (Polish parliament) took place here: in 1420, 1448, 1454 i 1462. Furthermore, the castle served as headquarters of King Kazimierz Jagiellonczyk, during the Thirteen Years' War (1454–66). At that time, the Łęczyca Voivodeship was divided into three counties - Brzeziny, Orzel and Łęczyca. In 1420, a Bohemian delegation offered here Czech crown to Władysław Jagiello. The city's prominence came to an end with the Swedish invasion of Poland when the castle was overrun and most of the city once again destroyed, and it remained in a state of crisis until the Partitions.[1]

Following the invasion of Poland at the start of the Second World War, Łęczyca was occupied by Nazi Germany and incorporated into the region known as Reichsgau Wartheland as part of the district (kreis) of Lentschütz (Germanized word for 'Łęczyca'). In January 1942 there was a forced labor camp operating in or near the town.[2] After the war it was reintegrated into the People's Republic of Poland. 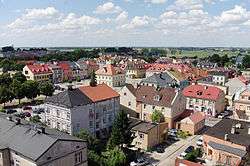 A view from the castle tower

Because of its royal history Łęczyca is probably more tourist-worthy than its current size might suggest. Some of the more interesting sights include:

A couple of kilometres away are the Collegiate church and the earthworks at the site of the medieval settlement of Tum.

after 1305 parts of the united Kingdom of Poland initially as two vassal duchies, later incorporated as Łęczyca Voivodeship and Sieradz Voivodeship.

After 1305 part of the united Kingdom of Poland as a vassal duchy, later after 1343 incorporated by the king Casimir III the Great as the Łęczyca Voivodeship.

Łęczyca is twinned with four cities:[3]