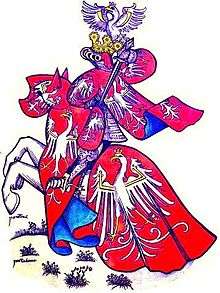 "King of Poland" in tournamental armour. Miniature from Armorial equestre de la Toison d'Or, made circa 1435, during the reign of Władysław III.

Władysław was the first-born son of Władysław II Jagiełło and Sophia of Halshany. He ascended the throne at the age of ten and was immediately surrounded by a group of advisors headed by Cardinal Zbigniew Oleśnicki, who wanted to continue to enjoy his high status at court. In spite of that, the young ruler and his ambitious mother were aware that there was opposition to them. Despite the agreements signed between Władysław II and the Polish magnates to ensure the succession for his sons, the opposition wanted another candidate for the Polish throne: Frederick of Brandenburg, who was betrothed to Hedwig, Jagiełło's daughter by his second wife. However, the conspiracy was resolved by the death of the princess, rumoured to have been poisoned by Queen Sophia.

The young king's reign was difficult from the very outset. His coronation was interrupted by a hostile nobleman, Spytko of Melsztyn. On the next day, the customary homage of the townsfolk of Kraków did not take place due to a dispute between the temporal and spiritual lords of Mazovia over their place in the retinue. Neither did Władysław have much to say later about matters of state, which were run by the powerful cleric and chancellor Oleśnicki. The situation did not change even after the Sejm (Polish parliament) had gathered in Piotrków in 1438, and declared the fourteen-year-old king to have attained his majority.

King of Hungary and Croatia

This situation continued until 1440, when Władysław was offered the crown of Hungary. However, accepting it would have led to numerous problems. Hungary was under a growing threat from the Ottoman Empire, and some Polish magnates did not want to agree to the king of Poland also being the monarch of Hungary, while Elisabeth, widow of the deceased King of Hungary, Albert II of Germany, attempted to keep the crown for her yet unborn child. Such inconveniences aside, Władysław finally took the Hungarian throne, having engaged in a two-year civil war against Elisabeth. He had received significant support from Pope Eugene IV, in exchange for his help in organising an anti-Turkish crusade. The eighteen-year-old king, although thus far a king solely by title, became deeply involved in the war against the Turks, having been brought up in the standard of a pious Christian monarch and ideal Christian knight, and paid no heed to the interests of Poland and of the Jagiellonian dynasty.

Crusade against Ottoman Turkey and death at Varna 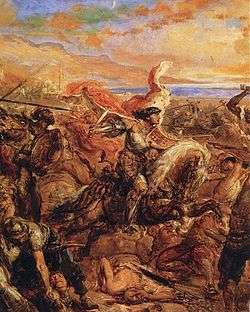 Władysław III at the Battle of Varna, by Jan Matejko

The "bulwark of Christianity" and other slogans put forward by the papal envoy Giuliano Cesarini, together with much more reasonable but only verbal promises of Venetian and papal fleets blockading the Dardanelles Straits, along with an enticing vision of a promise of victory in this glorious crusade carried for the glory of God and against the Turks, persuaded Władysław to engage his freshly victorious forces for another season of war, thus breaching the ten-year truce with the aggressive and still powerful Ottoman Empire. Despite their alleged forthcoming help, the Venetian fleet carried the Turkish army from Asia into Europe but failed to sail to Varna, a surprising move that Władysław and his most senior military commander John Hunyadi failed to anticipate. The Venetian treachery placed the huge Turkish army (60,000) under sultan Murad II in close proximity to the unsuspecting crusaders (20,000). As a result, when the Battle of Varna began on 10 November 1444, the Polish king and his multi-ethnic subjects did not sense that this would be for many of them their final fight. Facing the desperate circumstance the king, seeing the experienced Hunyadi fight and break the Sipahi cavalry, decided to gamble and directly attack the sultan, who was protected by the guard cavalry and formidable Janissary infantry. The young king was killed while personally leading his own 500-strong royal Polish heavy cavalry company, his charge losing impetus and coming to a standstill amongst the unyielding Janissaries protecting the sultan. The Janissaries killed the king's bodyguard and beheaded Władysław, displaying his head on a pole. Disheartened by the death of their king, the Hungarian army fled the battlefield. Neither the king's body nor his armor were ever found.

Władysław III had no children and did not marry. The chronicler Jan Długosz, known for his antipathy towards the king and his father, alleged that there was something unusual about Władysław's sexuality, though Długosz did not specify what: "too subject to his carnal desires (...) he did not abandon his lewd and despicable habits" (Polish: "zbyt chuciom cielesnym podległy (...) nie porzucał wcale swych sprośnych i obrzydłych nałogów").[2] Władysław was succeeded in the Kingdom of Poland by his younger brother, Duke Casimir IV of Lithuania, in 1447, after a three-year interregnum. In Hungary he was succeeded by his former rival, the child-king Ladislaus the Posthumous.

His life in Portugal according to a legend 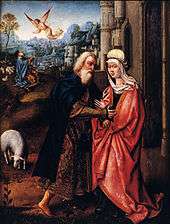 St. Joachim and St. Anne Meeting at the Golden Gate.

According to a Portuguese legend Władysław survived the Battle of Varna (although the Turks claimed to have his head, his body in royal armor was never found) and then journeyed in secrecy to the Holy Land. He became a knight of Saint Catharine of Mount Sinai (O Cavaleiro de Santa Catarina) and then he settled on Madeira.[3] King Afonso V of Portugal granted him the lands in Cabo Girão district of the Madeira Islands, rent-free for the rest of his life.[3] He was known there as Henrique Alemão (Henry the German) and married Senhorinha Anes (the King of Portugal was his best man[4]), who gave him two sons. He established a church of Saint Catherine and Saint Mary Magdalene in Madalena do Mar (1471).[5][6] There he was depicted in a painting as Saint Joachim meeting Saint Anne at the Golden Gate on a painting by Master of the Adoration of Machico (Mestre da Adoração de Machico) in the beginning of the 16th century.[3]

According to the tradition, he felt his defeat at Varna was a warning sign from God (since he declared war on a false pretext, violating the truce with the Ottoman Turks). Thus he wandered as a pilgrim, seeking forgiveness, which he found in Jerusalem. For the rest of his life he would deny his identity. A delegation of Polish monks went to Madeira to question him and certified he was in fact the long lost king, now living in secrecy. He declined their suggestion to ascend the Polish throne again.

In honor and respect, there are a main boulevard and a residential district in Varna called Władysław Warneńczyk, and there has been a successful football team named Vladislav Varna in past times. There is also a park-museum with a symbolic cenotaph of Władysław III in Varna, built on an ancient Thracian mound tomb.