The Texas Rangers' 2008 season was the 48th year of the franchise and 37th since moving to Arlington, Texas. The organization, after finishing fourth in the American League Western Division in 2007. The new season would be the first under the oversight of newly hired club president and former Ranger great Nolan Ryan. Upon his hire, Ryan indicated that his role in the 2008 season would be largely observational with regard to baseball operations, and any major changes would be made following the conclusion of the regular season.[1]

"I don't come in with any preconceived ideas of what I want to do or what needs to be done", said Ryan, who indicated that he will make two extended trips to spring training to become acquainted with players and staff. "I think it'll be a learning process for me. I'm going to try to get my arms around our organization so I'll have a better understanding of who we are and what we do and what I can do to help us be better."
— Nolan Ryan, February 8, 2008 [2]

The Rangers set a Major League record for the most doubles by a team in a season, with 376.[3]

The Rangers' offseason was filled with activity as Jon Daniels moved to quickly acquire talent both on and off the field. The 2007 club roster fielded several arbitration-eligible players, whose status for 2008 remained unsure. Several of these players would sign short-term contracts with the Rangers while others would seek playing time elsewhere. 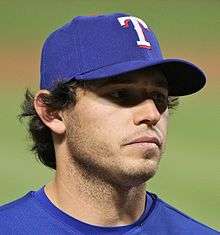