Eveland attended Palmdale High School in Palmdale, California, graduating in 2001.[1] After one year at Hill College in Hillsboro, Texas, he transferred to College of the Canyons in Santa Clarita, California.[2]

Eveland was drafted by the Milwaukee Brewers in the 16th round (469th overall) of the 2002 Major League Baseball draft. On July 16, 2005, Eveland made his Major League debut against the Washington Nationals. He would ultimately pitch out of the bullpen, appearing in 27 games, while posting a record of 1-1. The following season he would appear in nine games, with five starts. Eveland's record in 2006 was 0-3, with a 8.13 ERA.

After two seasons with the Brewers, Eveland was traded to the Arizona Diamondbacks on November 26, 2006 along with Doug Davis and Dave Krynzel in exchange for Greg Aquino, Johnny Estrada, and Claudio Vargas.[3][4] He appeared in only five games for the Diamondbacks. 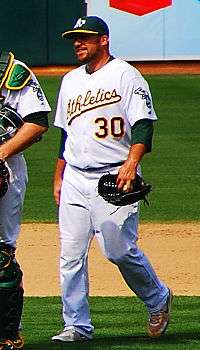 Eveland with the Oakland Athletics in 2009

On December 14, 2007, Eveland was dealt again as part of a six-player trade to the Oakland Athletics for Dan Haren and Connor Robertson.[5][6]

On February 6, 2010, Eveland was acquired by the Toronto Blue Jays, in exchange for a player to be named later or cash considerations.[7]

On November 22, 2010, Eveland agreed to a minor league split contract with the Los Angeles Dodgers.[11] He was assigned to the AAA Albuquerque Isotopes. He was selected to both the Pacific Coast League mid-season [12] and post-season [13] all-star teams. He made 25 starts for the Isotopes in 2011, with a 12-8 record and 4.38 ERA.

On September 1, 2011, The Dodgers called him up to the Major League team to start against the Pittsburgh Pirates.[14] In that game he picked up the win while allowing only one run in eight innings. He wound up making 5 starts with the Dodgers in September, with a 3-2 record, 3.03 ERA and 16 strikeouts. He had extreme splits in his short time with the Dodgers. In 3 road starts he was 3-0 with an 0.44 ERA but in his two starts at Dodger Stadium he was 0-2 with a 9.00 ERA. 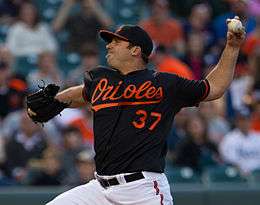 Eveland pitching for the Baltimore Orioles in 2012

He signed with the Hanwha Eagles in the Korea Baseball Organization for 2013.[18][19]

Eveland agreed to a minor league contract with the Boston Red Sox on January 21, 2015.[21] The deal was officially announced eight days later.[22][23] On June 5, Eveland opted out of his minor league deal.[24]

Eveland signed a minor league deal with the Atlanta Braves on June 7, 2015. He was assigned to the AAA Gwinnett Braves.[25] He was designated for assignment along with Nick Masset on July 5 to create room for David Carpenter whose contract was purchased and Arodys Vizcaíno who was activated from the restricted list.[26]

On July 17, 2015, Eveland signed a minor league deal with the Baltimore Orioles for a second time.

Eveland's brother, Kyle, was drafted by the Milwaukee Brewers in the 43rd round of the 2005 Major League Baseball draft.[1]