Arlington Stadium was a baseball stadium located in Arlington, Texas, United States, located between Dallas and Fort Worth, Texas. It served as the home for the Texas Rangers (MLB) from 1972 until 1993, when the team moved into The Ballpark in Arlington (now Globe Life Park in Arlington), which has been the team's current home since 1994. 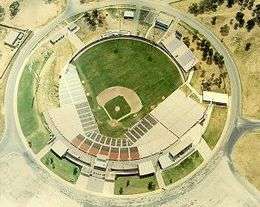 Arlington Stadium in its minor league days when it was called Turnpike Stadium.

The stadium was built in 1965 as Turnpike Stadium, a minor league ballpark seating 10,000 people named for the nearby Dallas-Fort Worth Turnpike (Interstate-30 aka Tom Landry Highway). The Fort Worth Cats of the Texas League moved there as the Dallas-Fort Worth Spurs, and played there for the next seven years, setting many Texas League attendance records, especially after it expanded to 20,500 seats in 1970.

However, the stadium's real purpose was to attract a major league team to the Metroplex.[4] It had been built to major league specifications, and was designed to be expandable to up to 50,000 seats. Due to its location in a natural bowl, only minimal renovations (such as connecting dugouts directly to the clubhouses) would be necessary to ready it for a big-league team. Although it was built primarily for baseball, its general shape was very similar to the major league multi-purpose stadiums that were beginning to emerge in the mid-1960s. The Metroplex had been mentioned as a possible expansion site since the 1950s, and Arlington Mayor Tom Vandergriff figured that Arlington, halfway between the two cities, would be the best site for a prospective major league team.

In 1971, the struggling Washington Senators announced their intentions to move to the Metroplex as the Texas Rangers. The stadium was expanded to seat over 35,700 people, and was renamed "Arlington Stadium". It was the fourth former minor league park converted for use by a major-league team (not counting instances where minor-league parks served as temporary homes), after Baltimore's Memorial Stadium, Kansas City's Municipal Stadium and Minnesota's Metropolitan Stadium.

The park had a skeletal, jerry-built feel, and it was obvious that it had once been minor-league. An upper deck wasn't added until 1978; until then, fans entered at the very top of the stadium and walked down to their seats. It had the largest bleacher section in baseball, stretching from foul pole to foul pole. Unlike most stadiums built during this time, there were very few bad seats, due to its natural-bowl location and the field being 40 feet below street level. Early in the stadium's existence, the stadium could be converted for football by swiveling the third-base grandstands into the outfield. In the process, people sitting in the left-field bleachers had their view cut off. When a football game was played at the stadium, an auxiliary press box, located near the first base side, was used.[5] The 1978 renovations, however, permanently fixed the seats in the baseball configuration for the remainder of the stadium's existence. 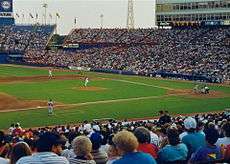 Although it had been built for baseball, Arlington Stadium had a number of drawbacks. There was no roof, and thus virtually no protection from the oppressive Texas heat. For nearly all of its existence, it was the hottest stadium in the majors. It was not unheard of for game-time temperatures to be well above 100 degrees. Combined with the Rangers' mediocre performance, this held down attendance considerably during the 1970s. Due in part to the heat, the Rangers scheduled nearly all of their games from May through September at night. Other than nearby amusement park Six Flags Over Texas, there was no neighborhood around the park. In his book Storied Stadiums, Curt Smith described it as "small, (but) not intimate".

The scoreboard in the Rangers' early days was a long, horizontal rectangle with a panel shaped like the state of Texas. It was replaced before the 1984 season with a new scoreboard and series of billboards that ran from foul pole to foul pole. "Cotton-Eyed Joe" was played during the seventh-inning stretch for fans to dance to instead of "Take Me Out to the Ballgame". Arlington Stadium was also the first major league ballpark to sell nachos (in 1974).[6]

The stadium, though, had two advantages. First, before installation of the wrap-around scoreboard and billboards, the predominant gusty winds from the south knocked down many fly balls that would otherwise have been home runs. Second, the large number of metal bleacher seats would come in handy on Bat Night, the promotional game where children age 13 and under would receive (in most years) a real bat that could be pounded on the bleachers. As Bat Night would (in some years) be the only sell-out for the usually poor Rangers squads, the spectacle of 10,000-15,000 kids banging their bats all at once would create a deafening sound. 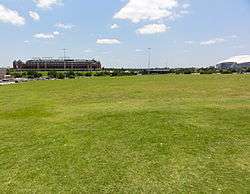 A large portion of the stadium's site is now occupied by an empty field, pictured in 2012. Globe Life Park in Arlington and AT&T Stadium are visible in the background.

The stadium eventually began to show its age and inadequacy, and the City of Arlington approved the construction of a new stadium for the Rangers. The last game was played in Arlington Stadium on October 3, 1993, resulting in a 4-1 win by the visiting Kansas City Royals, witnessed by 41,039 fans (it was also the final game in the career of Hall-of-Famer George Brett). Following the 1993 season, the Rangers moved to the nearby Ball Park in Arlington (renamed Ameriquest Field until 2007 and later Globe Life Park in Arlington in 2014), and Arlington Stadium was demolished in 1994. The foul poles and home plate from Arlington Stadium were moved to the new ballpark, along with some of the bleachers. The bleachers are currently painted green, but their original blue color is occasionally visible in spots where the green paint has chipped. Home plate was inserted into place at the Ballpark in Arlington by Tom Schieffer (Texas Rangers President), Richard Greene (then mayor of Arlington), Tom Vandergriff (former mayor responsible for bringing the team to Arlington), and George W. Bush (then team part-owner; later Governor of Texas and President of the United States). The site of the old stadium is just west of the Arlington Convention Center and north of the youth ballpark. Legends Way, a road built to give access to Cowboys Stadium which was renamed AT&T Way in 2013 in concert with the corporate renaming of Cowboys Stadium, runs directly through the center of the old location.

Arlington Stadium never saw a playoff game or an All-Star Game, but was host to several of Nolan Ryan's greatest moments, including his 5,000th strikeout[7] and his seventh no-hitter.[8] Baltimore Orioles shortstop Cal Ripken, Jr. and Rangers outfielder Oddibe McDowell, were the only two players to hit for the cycle in Arlington Stadium. It was also the site of the 11th perfect game in Major League Baseball history, when Mike Witt of the California Angels defeated the Rangers on September 30, 1984, 1-0.[9]

A memorable brawl happened on August 4, 1993 when the Rangers hosted the Chicago White Sox. Ryan, the starter for that game, hit Robin Ventura with a pitch. Ventura decided to charge the mound, which emptied both benches. As Ventura reached the mound, Ryan immediately caught him in a head lock and punched him on the top of his head six times. [10]