The 2010 Solomon Islands earthquake occurred with a moment magnitude of 7.1 on January 3 at 22:36:28 (UTC). A tsunami measuring approximately 10 feet affected some parts of the islands. The earthquake was the largest in a series of quakes to strike the Solomon Islands over the preceding days.[2] The 7.1 mainshock was preceded by a 6.6 magnitude foreshock some 48 minutes previous. As many as 1,000 people were left homeless on the island of Rendova after the earthquake and tsunami destroyed approximately 200 homes. 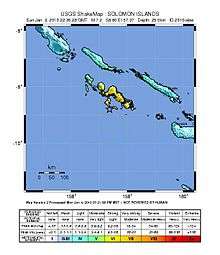 Landslides and tsunamis on the islands of Rendova and Tetepare.[2] A tsunami measuring up to 10 feet (3 meters) struck Rendova, destroying as many as 200 homes and leaving one-third of Rendova's population homeless.[2]

Approximately 1,000 residents have lost their residences, out of the total Rendovan population of just 3,600 people. The village of Retavo, which has a population of approximately 20 people, was hit by a 10-foot tsunami wave.[2] Another village, Baniata, reported that sixteen homes were destroyed and thirty-two were damaged by the earthquake and tsunami.[4]