The 2010 Mentawai earthquake occurred with a moment magnitude of 7.7 [1] on 25 October off the western coast of Sumatra at 21:42 local time (14:42 UTC).[4] The earthquake occurred on the same fault that produced the 2004 Indian Ocean earthquake. It was widely felt across the provinces of Bengkulu and West Sumatra and resulted in a substantial localized tsunami that struck the Mentawai Islands.[5]

The island of Sumatra lies above the Sunda megathrust, the interface between the subducting Australian Plate and the overriding Sunda Plate. Movement on this structure has been responsible for many large historical megathrust earthquakes. The most recent sequence of large ruptures started with the 2004 Indian Ocean earthquake and included the 2005 Nias–Simeulue earthquake and the 2007 Sumatra earthquakes.[6][7] 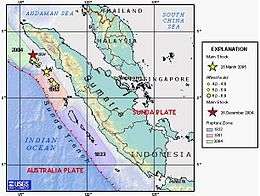 The October 2010 earthquake is thought to have been a result of thrust faulting along or near the plate interface from the calculated focal mechanism and the focal depth. According to seismic hazard potentials and deformation features, the Sunda Trench can be divided into several segments. The southern segment lies to the south of Siberut Island. The rupture area of this earthquake is situated within the southern segment, where historical earthquakes include the earthquake of 1797 and the Mw ~ 9.0 1833 Sumatra earthquake.[1][10]

Unlike in 2004, the tsunami caused by the October 2010 earthquake did not propagate westwards and other Indian Ocean nations were unaffected. It has been suggested that the tremor may have been a large aftershock of the much larger Sumatran earthquakes of September 2007.[11] The earthquake occurred around seven hours after the eruption of Mount Merapi on the Indonesian island of Java. However, the two events are not thought to be linked.[12] 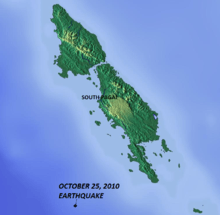 Epicentre in relation to North and South Pagai

The earthquake's worst effects were felt on the remote Mentawai Islands. On the island of South Pagai, the tsunami that followed the earthquake reached a height of 3 m (9 ft) and swept as far as 600 m (1800 ft) inland. According to Indonesian officials, more than 20 villages were hit by the tsunami, displacing more than 20,000 people[12] and affecting about 4,000 households. The coastal village of Betu Monga on South Pagai was reported to have been destroyed with many residents still missing.[13] Many residents of the villages of Peurogat and Beleerakso were also reported to be missing.[12] Eighty percent of the houses in the North Pagai village of Muntei Baru were reported damaged or destroyed.[14]

According to a spokesperson for the Indonesian Agency for Meteorology, Climatology and Geophysics (BMKG), the quake was felt in several mainland towns, but no damage or deaths were reported.[15] The Mentawai Islands may have acted as a barrier, shielding the Sumatran coast by absorbing the brunt of the tsunami.[14] As of October 30, 2010, the confirmed death toll stands at 435, with 110 more unaccounted for. Many of the missing are believed to have been swept out to sea.[3]

Relief teams were initially unable to reach the islands due to poor weather conditions and rough seas. The Indonesian military was mobilized and international aid organizations also began a relief effort.[12][13] The first aid began to arrive on October 27, two days after the earthquake and tsunami.[14]

Many villages on the islands were affected by the tsunami, which reached a height of 3 m (9 ft) and swept as far as 600 m (1800 ft) inland. The tsunami caused widespread destruction that displaced more than 20,000 people and affected about 4,000 households. 435 people were reported to have been killed, with over 100 more still missing.[3] The subsequent relief effort was hampered by bad weather[13] and the remoteness of the islands, which led to delays in the reporting of casualties.[16]

Several aftershocks have been recorded since the initial quake,[17] the more significant of which are listed below.

The BMKG issued a tsunami warning based on seismographic data.[27] An alert was broadcast from radios and mosque loudspeakers on the mainland, prompting thousands to flee to higher ground.[11] It was later cancelled, but officials said that a tsunami warning system installed following the 2004 Indian Ocean earthquake and tsunami had failed to function properly. According to Indonesian officials, two of the system's buoys out at sea had been vandalized and were inoperative.[28] The claim of a breakdown was disputed by German officials who were working with the Indonesians to maintain and develop the system. Jörn Lauterjung, the head of the German-Indonesia Tsunami Early Warning Project, said that it had "worked very well", only one sensor had not been working and its failure had not harmed the system's operation.[29] However, the epicentre of the earthquake was so close to the islands that a warning would probably have been too late in any case, as the tsunami only took about five to ten minutes to reach Pagai.[13]