The defending champion was Gert Jõeäär (Cofidis), who won the 2014 race, which used a very similar course, after victory in the opening time trial.[2] He was succeeded in 2015 by Yves Lampaert (Etixx–Quick-Step), who came fourth in the prologue, won the first road stage of the race from a breakaway and defended his race lead in the final stage. As well as winning the overall classification, he won the points and youth classifications, while his team won the teams classification.

The 2015 race included three stages. The first of these was a 7 km (4.3 mi) prologue individual time trial, which was followed by two road stages. The first road stage was mostly flat, except for the climb of the Oude Kwaremont midway through. The second similarly included three hills (the Rodeberg, the Kemmelberg and the Monteberg) in the middle part of the race, with a finale that again included some small climbs.

Route of the prologue

The first stage of the race was a 7 km (4.3 mi) prologue individual time trial in Middelkerke. The course was an out-and-back route along the northern Belgian coast; it took place in sunny conditions with some gusts of wind.[4][5][6]

The time trial was won by Anton Vorobyev (Team Katusha). He was the only rider to complete the course in under eight minutes. Jesse Sergeant (Trek Factory Racing) finished second, with Jan Bárta (Bora–Argon 18) third.[7] This was the first professional win of Vorobyev's career.[8] 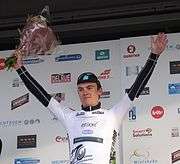 The first road stage of the race was a 174.1 km (108 mi) route from Brugge to Harelbeke. The principal difficulties came in the middle part of the stage, with the Oude Kwaremont the most significant climb.[9]

An early breakaway was formed of four riders: Tim Kerkhof (Team Roompot), Gijs Van Hoecke (Topsport Vlaanderen–Baloise), Alistair Slater (An Post–Chain Reaction) and Gery Gardeyn (Veranclassic–Ekoi). They were not allowed a significant advantage by the peloton and were caught after 110 km (68 mi) of racing.[10] The main break of the day was then formed with 57 km (35 mi) remaining by five riders: Yves Lampaert (Etixx–Quick-Step), Tosh Van der Sande (Lotto–Soudal), Alexis Gougeard (AG2R La Mondiale), Sander Cordeel (Vastgoedservice–Golden Palace) and Mirko Selvaggi (Wanty–Groupe Gobert). This break, which included several riders threatening to Vorobyev's lead, was chased by Team Katusha. The peloton was never quite able to make contact with the breakaway, which was reanimated by a sprint for an intermediate sprint. Cordeel attacked in the final kilometre, but was unable to create a gap. Lampaert followed Van der Sande's wheel and was able to pass him in the final metres to take the stage win. The peloton finished four seconds later.[10][11]

Thanks to the lead over the peloton and the bonus seconds for the stage win, Lampaert took over the overall lead of the race from Vorobyev, as well as the lead of the points and young riders classification.[11]

The final stage of the race was a 184.5 km (115 mi) route between Nieuwpoort and Ichtegem. The middle part of the race included some difficult climbs, including the Rodeberg, Kemmelberg and Monteberg. The race then finished with three laps of a circuit in Ichtegem that contained two moderate climbs.[12]

An early break was formed by Tim Kerkhof (Team Roompot), Louis Verhelst (Cofidis), Riccardo Stacchiotti (Nippo–Vini Fantini), Jimmy Engoulvent (Team Europcar), Jelle Wallays (Topsport Vlaanderen–Baloise), Edwig Cammaerts (Veranclassic–Ekoi) and Stef Van Zummeren (Verandas Willems). They gained a four-minute lead over the peloton. There were then attacks from the peloton, with seventeen more riders joining the front group. These included Lampaert, the race leader, and three teammates. In the final circuits of the race, however, these riders were brought to the main peloton and the stage ended in a bunch sprint. This was won by Danny van Poppel, led out by his brother Boy.

Lampaert finished in eleventh place on the stage, securing his victory in the race and also taking the youth and points classifications.[13][14]