The 2016 Copa del Rey Final was a football match played on 22 May 2016 to decide the winner of the 2015–16 Copa del Rey, the 114th edition of Spain's primary football cup. It was played at the Vicente Calderón Stadium in Madrid.

It was won by defending champions Barcelona, who defeated Sevilla 2–0 after extra time to achieve their 28th title.[1][2]

Both teams had victories by wide margins on their way to the final; Barcelona scored 25 goals and conceded five in eight games, while Sevilla scored 22 times in their eight matches, conceding only two goals in the second leg of their semi-final.

As Barcelona won both the 2015–16 La Liga and the Copa del Rey, the 2016 Supercopa de España will also be between Barcelona and Sevilla.

Barcelona had previously played in 37 Copa del Rey finals, second only to Real Madrid's 39, and had a record 27 victories. They were the reigning champions, having defeated Athletic Bilbao 3–1 in the previous year's final at their Camp Nou.[3]

Sevilla had been to seven finals, winning five, most recently in 2010 when they defeated Atlético Madrid 2–0 at the Camp Nou. Their last defeat was in 1962, 2–1 to Real Madrid. The 2016 final was the first between the two sides.[3]

It will be the 13th such final at the Vicente Calderón Stadium in Madrid, home of Atlético Madrid. Barcelona previously won the final at the ground in 1968, 1981 and 2012, and lost in 1974 and 1986. It will be Sevilla's first final at the stadium, although three of their victories came elsewhere in the Spanish capital.[3]

The two teams began the season against each other in the 2015 UEFA Super Cup in Tbilisi on 11 August, which Barcelona won 5–4 after extra time.[4]

Route to the final

Luis Suárez scored five times in Barcelona's run to the final, including four goals in their 7–0 win over Valencia.

Barcelona, of La Liga, entered the tournament in the last 32, against Villanovense of the Segunda División B. The first leg in Villanueva de la Serena, on 28 October 2015, was a goalless draw, with manager Luis Enrique fielding a young and inexperienced side.[5] In the second leg on 2 December at the Camp Nou, however, Barcelona triumphed 6–1. Dani Alves opened the scoring with a long-range strike in the fourth minute, and Sandro added a hat-trick and Munir a brace.[6]

In the round of 16, Barcelona played city rivals Espanyol in the Derbi barceloní. They opened on 6 January 2016 with a 4–1 home victory with goals from Lionel Messi (2), Gerard Piqué and Neymar, after the visitors had taken the lead through Felipe Caicedo in the ninth minute. Hernán Pérez and Pape Diop were sent off for Espanyol late on, the latter for dissent.[7] A week later on their trip to the RCDE Stadium, Barcelona won 2–0 with a Munir goal in each half; the young Spaniard started the game due to Luis Suárez's suspension for his part in the post-match skirmish from the first game.[8]

Barcelona met Athletic Bilbao in the quarter-finals, a repeat of the last year's final. On 20 January at the San Mamés Stadium, they won 2–1 with first-half strikes from Munir and Neymar. A week later in the second game, the Basques took the lead through Iñaki Williams, but Barcelona replied in the second half with Suárez, Piqué and Neymar's goals.[9]

In the semi-finals, Barcelona met Valencia and won 7–0 in the home game on 3 February; Suárez scored four times and Messi three.[10] A week later, in the second match at the Mestalla Stadium, the hosts took the lead through Álvaro Negredo and Wilfrid Kaptoum equalised late on, stretching Barcelona's unbeaten run to 29 games.[11] 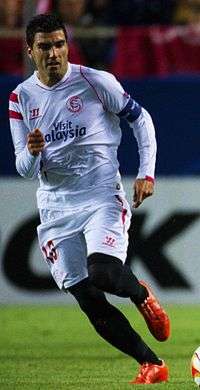 José Antonio Reyes captained Sevilla on their run to the final, scoring twice.

Sevilla, also of La Liga, entered at the same stage against a third-tier opponent, Logroñés. In the first leg in La Rioja on 2 December 2015, they won 3–0 through goals by Coke, Michael Krohn-Dehli and Ciro Immobile. Two weeks later, at the Ramón Sánchez Pizjuán Stadium, they won 2–0 through goals from Immobile and captain José Antonio Reyes.[12]

Like Barcelona, in the last 16 Sevilla met their municipal rivals, Real Betis. They travelled away for the first game on 6 January 2016, winning 2–0 with a strike in each half by Krohn-Dehli and Grzegorz Krychowiak.[13] Hosting the second leg, they won 4–0; Reyes and Adil Rami struck in the first half and Frenchmen Kévin Gameiro and Gaël Kakuta in the second.[14]

In the quarter-finals, Sevilla drew Mirandés, the only Segunda División team remaining. On 21 January, they won 2–0 in the home leg; Steven N'Zonzi scored in the first half and Vitolo secured the score in added time. A week later in Miranda de Ebro, Sevilla extended their lead with a ninth-minute penalty by Vicente Iborra, and added later goals by Juan Muñoz and Coke.[15]

Sevilla were tasked with in-form Celta de Vigo in the semi-finals. Hosting the first game on 4 February, Rami headed the Andalusians ahead at the end of the first half, and Gameiro, who had earlier missed a penalty, scored two goals in the space of three minutes. Ex-Celta player Krohn-Dehli later confirmed a 4–0 win.[16] A week later at Balaídos, Celta scored twice through former Sevilla striker Iago Aspas, but the contributions of Éver Banega and Yevhen Konoplyanka confirmed a draw, despite the late dismissal of N'Zonzi.[17]

There had been a ban on displays of the Estelada, the flag of Catalan independence, at the match for "operational and security reasons". A Madrid judge overruled the ban after Barcelona complained, citing freedom of expression; Carles Puigdemont, President of the Generalitat of Catalonia, would have boycotted the game if the ban remained. Before the ban was repealed, Catalan nationalists planned to give out 10,000 flags of Scotland, equating the British constituent country with their region.[18]

Javier Mascherano was sent off for Barcelona in the 36th minute for dragging down Kévin Gameiro by the shirt as he ran towards the penalty area.[19] There were no goals in the 90 minutes, with the game going into extra-time. Jordi Alba scored the opening goal for Barcelona in the 97th minute with low left foot finish from six yards across the goalkeeper after he ran onto a pass from Lionel Messi from midfield. Neymar made it 2–0 in the last moments of the game with a low finish from the left after a short pass from Messi.[20] Daniel Carriço was sent off for Sevilla in stoppage time at the end of extra time when he received a second yellow card for a foul on Messi.[21]