Arda Turan (born 30 January 1987) is a Turkish professional footballer who plays as an attacking midfielder for Spanish club FC Barcelona and captains the Turkey national team.[3][4]

He is mostly known for his ball control, dribbling skills, and vision. At the age of 21, prior to the 2009–10 season, he was made the captain of Galatasaray. Turan is the first Turk to win the La Liga title, achieving this in the 2013–14 season.

As of March 2016, he has 89 senior national caps and 17 goals for Turkey and following a successful UEFA Euro 2008 campaign, he was ranked eighth in a selection of the 100 Best Young Football Players in the World piece published by Spanish magazine Don Balón in July 2008.[9]

Turan is a product of the Galatasaray youth. He was promoted to first team by Gheorghe Hagi in 2004–05 season, making his official debut against Bursaspor in a Turkish Cup match on 22 January 2005. He had a spell on loan to fellow Süper Lig side Manisaspor in the second half of the 2005–06 season. In 2005–2006 season, Turan scored two goals for the team based in Manisa. 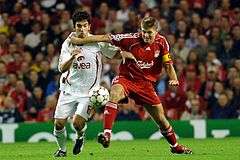 He was recalled for the start of the following 2006–07 season and quickly broke into the first team. It was during this time that he received his first senior international call up. Arda helped Galatasaray qualify for the following season's Champions League group stage. Turan continued his development in the 2007–08 season, scoring seven goals in the second half of the season. At the start of the 2009–10 season, he was handed the captaincy of Galatasaray[10] and the squad number 10, which had previously belonged to Metin Oktay and Hagi, having previously worn number 66.[11]

As captain at the start of season, he guided his team to six consecutive league wins games which put Galatasaray comfortably at the top of the table. In the 2010–11 season, Turan was troubled with injuries and played a limited amount of games. By the end of the season, he had played in only 12 league games, where he scored two goals, and in three Turkish Cup games, where he scored one. His impressive performances over the last four years of his Galatasaray career lead to interest from Spanish club Atlético Madrid.[12] 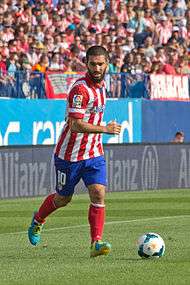 Turan playing for Atlético Madrid in 2013.

In the late hours of 9 August 2011, it was announced that Turan would be joining Atlético Madrid for a fee of €12 million plus bonuses,[13] making him the most expensive Turkish footballer of all-time.[14][15]

He was handed the number 11 shirt and made his 2011–12 debut on 28 August 2011 against CA Osasuna, coming on as a substitute in the second half. He made his UEFA Europa League debut on 15 September against Celtic, starting the game and assisting a goal. On 18 September, Arda was again selected for the starting XI and notched two assists.

On 25 October, Galatasaray president Ünal Aysal stated that Turan will come back to Galatasaray in the future under right of first refusal that was signed between Galatasaray and Atlético during an interview with Lig TV.[16] On 30 November, he scored his first goal for Atlético in a Europa League game against Celtic with a powerful volley. On 11 December, Turan scored his first league goal with a driven volley just outside the box. In the Europa League game that followed, Arda netted again in a 3–1 win against Rennes.

Turan scored two goals in two minutes as Atlético defeated RCD Espanyol 3–1 on 22 April 2012, to move his side into seventh place and just three points behind Málaga CF for the final Champions League spot.[17] On 9 May, in the 2012 UEFA Europa League Final against Athletic Bilbao, he made an assist to his teammate Radamel Falcao, which made the match 2–0.

Turan's number was changed from 11 to 10 before the 2012–13 season. He began his season with a game-tying long, long-distance screamer in Atlético 1–1 opener against Levante UD. He then won the 2012 UEFA Super Cup with Atlético against Champions League victors Chelsea, assisting Falcao for the third goal of the game in a 4–1 victory.[18] On 16 September 2012, Arda scored the third goal of the game against Rayo Vallecano in a 4–3 home win. He was instrumental in Atlético's wins in their first two 2013–14 Champions League matches against Zenit and Porto, scoring a goal in each match.[19] On 30 April 2014, he scored the last goal of a 3–1 away win against Chelsea in the semi-finals of the Champions League, sending Atlético to the final for the first time since 1974.[20]

On as a substitute an hour into the match, Turan scored the decisive goal in the 76th minute for Atlético in their 1-2 away league win against derby rivals Real Madrid on 13 September 2014. After the game, Simeone hailed his impact on Atlético's game.[21] On 1 October 2014, Turan scored the only goal of the game in the 1–0 win against Juventus in the group-phase of the 2014–15 Champions League season. On 28 January 2015, in the 47th minute of the home leg of the Copa del Rey quarter-final against FC Barcelona, Arda threw his boot in the direction of the assistant referee, when he was denied a free kick for an alleged foul by Ivan Rakitić.[22] However, after the match, he was not handed any kind of ban for the incident.[23] Atlético Madrid were eliminated from the tournament, as the match ended with a 2–3 defeat, and with a 2–4 defeat in the tie. On 22 April, Turan was sent off for a foul on Sergio Ramos as Atlético lost 0–1 at Real Madrid to be eliminated from the quarter-finals of the Champions League.[24]

On 6 July 2015, FC Barcelona announced the signing of Turan from Atlético for €34 million, plus €7 million in variables. The contract will run for five seasons, but Turan would only be able to debut for the Catalans in January 2016, after Barcelona's transfer ban had been lifted.[25] On 29 December 2015, Turan picked number 7 for his shirt.[26][27] Started the game in starting line-up, Turan made his debut on 6 January 2016, Wednesday, in a Derbi barceloní encounter taken place at the first leg of round of 16 Copa del Rey, which ended 4–1 for Barcelona.[28] He placed a shot in the 2nd half that was saved by RCD Espanyol keeper Pau López.[28] Turan played his first league game with Barcelona on 9 January 2016, at 17th match-day home game against Granada CF, ended 4–0, in which he assisted Lionel Messi for the opener of the match.[29][30] On 17 August 2016, Turan scored twice and Lionel Messi once as Barcelona earned a 3-0 second-leg victory over Sevilla to win the 2016 Supercopa de España 5-0 on aggregate.[31] 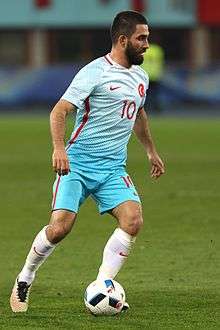 Turan is a Turkish international regular, having made over 90 appearances for Turkey at senior level. He made his debut in the 1–0 friendly victory over Luxembourg on 16 August 2006, having worked his way through the youth national team at the under-19 and under-21 levels. He scored his first international goal on 25 May 2008 in a friendly against Uruguay.

He featured in nine of Turkey's 12 qualification matches for Euro 2008, and starred in the finals of the tournament itself. Turan scored two goals during Turkey's progression to the semi-finals. The first was a last-minute winner against co-hosts Switzerland in their second group game to knock them out of the competition.[32] His second came in the final group game against the Czech Republic, in which the winner would go through to the quarter-finals due to identical records. He scored Turkey's first goal in the second half, beating Petr Čech with a low shot, which led to Turkey coming from 2–0 down to win the match.[33] He also successfully converted a spot-kick in the penalty shootout against Croatia in the quarter-finals,[34] taking Turkey to the semi-finals, where they were eventually knocked out by losing finalists Germany.

Turan scored two goals during the qualification rounds of the 2010 FIFA World Cup, but ultimately Turkey failed to qualify from their group. After a qualifier in September 2008 between Armenia and Turkey – the two sides having historical political problems – both teams received a FIFA Fair Play Award for 2008.[35]

He scored the Turkish national team's 600th international goal in a 2010 World Cup qualification game against Estonia on 5 September 2009.[36] Arda scored four goals for Turkey during the qualification rounds of the UEFA Euro 2012 — two against Kazakhstan, one against Belgium, and one against Austria. Turkey, however, could not qualify for the final stages of Euro 2012 after being eliminated by Croatia in the play-offs.

Turan states that while he enjoys being compared to Lionel Messi, he thinks that Messi is the "greatest player in the world."[37] He is also highly involved in work with the Galatasaray youth set up, particularly with the under-21's. He is a regular follower of their games and offers them support.

On 16 November 2008, Turan collapsed during a game against İstanbul BB. After being rushed to hospital, he was diagnosed with cardiac arrhythmia.[38] The day after the incident, doctors declared that Arda was in good health and that extreme exhaustion caused the arrhythmia. In November 2009, he suffered a minor bout of swine flu but recovered within a few days to resume training.[39] He has a passion for cars and currently drives a Ferrari F12 Berlinetta and an Audi RS6. In January 2009, he was involved in car crash in Istanbul.[40][41] Fortunately, Arda suffered no serious injuries and continued training with only cuts and bruises.[42]

Turan is also known for his humanitarian work, especially in the helping of sick children.[47]

On 11 May 2014, Turan was announced as a goodwill ambassador for the Khojaly Massacre.[48][49][50] His ambassador activities are aimed to raise awareness about this issue and promoting world peace.[51][52]

In January 2010, Turan was voted as the third most popular European footballer of 2009, as well as the 14th most popular footballer in the world, by the IFFHS.[53][54] He is featured on the cover of the video game FIFA 15 in Turkey, together with team mate Lionel Messi.[55]