Rafael Alcántara do Nascimento (born 12 February 1993), commonly known as Rafinha, is a Brazilian professional footballer who plays as an attacking midfielder for Spanish club FC Barcelona and the Brazil national team.

Rafinha started his career with Barcelona, making his debut with the first team in 2011. After a loan at Celta de Vigo, he played his first league match for the Catalans in 2014.

Rafinha represented both Spain and Brazil at youth level before debuting with the latter at senior level in 2015.

Born in São Paulo, Brazil,[2] Rafinha joined FC Barcelona's youth ranks at the age of 13. On 8 January 2011, he made his professional debuts with the B-team, coming on as a substitute for Jonathan dos Santos in the 55th minute of a 1–2 home loss against Girona FC for the second division championship.[3] A week later, again off the bench, he scored his first goal in a 3–2 win at UD Salamanca, also adding an assist.[4]

Rafinha made his debut with the senior Barcelona squad on 9 November 2011, taking the place of Cesc Fàbregas for the last 15 minutes of a 1–0 away win against CE L'Hospitalet for the season's Copa del Rey.[5] He finished the league campaign with 39 games – 35 starts – and eight goals for the reserves, including two in a 4–0 win at FC Cartagena on 4 September.[6]

On 27 June 2013, Rafinha extended his contract with Barça, keeping him at the club until 2016.[7] A few weeks later, he was loaned to fellow La Liga team Celta de Vigo,[8] and made his debut in the main category of Spanish football on 19 August, helping the Galicians to a 2–2 home draw against RCD Espanyol.[9] He scored his first top-flight goal 12 days later, in another draw at the Balaídos (1–1, with Granada CF).[10]

Rafinha netted a brace at Real Sociedad on 23 November in Celta's 4–3 loss.[11] He was voted the league's Breakthrough Player of the Season, ahead of Real Madrid's Jesé and Rayo Vallecano's Saúl.[12]

Rafinha, Gerard Piqué and Munir El Haddadi warming up for Barcelona in August 2014

Rafinha made his top flight debut for Barcelona on 24 August 2014 at the Camp Nou, in Luis Enrique's first match in charge. He played the first half of an eventual 3–0 win over Elche CF before being substituted for Marc Bartra.[13] On 25 November, he assisted Lionel Messi's goal in a 4–0 win at Cypriot club APOEL, which made him the outright top scorer in the history of the UEFA Champions League; however, Rafinha was sent off for two bookings later on in the match.[14]

Rafinha scored his first goal for Barcelona on 3 December, concluding a 4–0 win at SD Huesca in the first leg of the Copa del Rey's last 32 (12–1 aggregate).[15] The following 1 February, he recorded his first goal for the team in La Liga, part of a 3–2 home win over Villarreal CF.[16] Barcelona won the treble, with Rafinha an unused substitute in the domestic and European finals.

With compatriot Neymar out through illness, Rafinha started on the left of Barcelona's attack in the 2015 UEFA Super Cup against Sevilla FC in Tbilisi, scoring the club's third goal in a 5–4 triumph.[17]

On 16 September 2015, Rafinha suffered a torn right anterior cruciate ligament (ACL) during the Champions League 1–1 away draw at Roma, leaving the game on a stretcher after being on the receiving end of a heavy challenge from Roma midfielder Radja Nainggolan. After surgery, he was expected to be out for about six months.[18]

Later that year, however, he switched allegiance to Brazil, going on to represent the under-20s at the 2013 South American Youth Championship in Argentina.[21] He was one of seven stand-by players named by Dunga for the senior team at the 2015 Copa América.[22]

In September 2015, Rafinha was called up by Dunga for friendlies against Costa Rica and the United States. On 5 September, he entered the former game at New Jersey's Red Bull Arena in the 81st minute in place of Luiz Gustavo, earning his first cap for the senior Brazil side.[23] Four days later, a minute after coming into the game, he scored his first goal, then assisted clubmate Neymar in a 4–1 win against the U.S.[24]

Rafinha's father, Mazinho, was also a footballer and a midfielder, notably winning the 1994 FIFA World Cup with Brazil. His mother, Valéria, played volleyball, while his elder brother, Thiago – another midfielder – also emerged through Barcelona's youth ranks, going on to represent its first team and the Spain national side. Thiago currently plays for German club Bayern Munich.[25]

Rodrigo, currently a Valencia CF player and who played youth football with Real Madrid and went on to spend several seasons with S.L. Benfica, is Rafinha's cousin.[26] 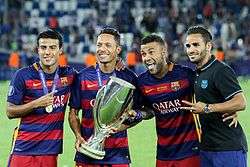