The 21st Century Steam program was a program begun by the Norfolk Southern Railway in 2011, and featured several classic steam locomotives pulling passenger excursions along Norfolk Southern rails in the eastern United States. The Program officially ended in 2015 with the Southern 4501 pulling the Nancy Hanks Special, another trip had been scheduled out of Atlanta but was canceled due to flooded track in the area. In 2016 the Norfolk and Western 611 was used on trips sponsored by the Virginia Museum of Transportation and the North Carolina Transportation Museum. This new program will run in some areas that were not reached by the 21st Century Steam program over the five-year period the program operated.

In 1994, however, Norfolk Southern’s management decided to end the program. At the time, N&W 1218 was being overhauled in Birmingham, Alabama, so she was cosmetically restored and eventually was sent back to Roanoke, Virginia. Meanwhile, N&W 611 pulled her final excursion from Birmingham to Chattanooga, Tennessee on December 3 and arrived back in Roanoke four days later. In the end, both N&W 611 & 1218 would wind up on display at the Virginia Museum of Transportation in Roanoke. However, in 2014 N&W 611 was removed from display and has returned to steam on May 9, 2015 at the North Carolina Transportation Museum

In 2005, Norfolk Southern acquired a new CEO, Charles "Wick" Moorman. Two years later, Moorman traveled to Chattanooga to speak at a gathering of the National Railway Historical Society. Two other members of Norfolk Southern had already been in favor of bringing steam back and while there, Moorman toured the facilities of the Tennessee Valley Railroad Museum (TVRM) and also traveled on one of their excursions. He also met with Tim Andrews, TVRM's president.[2]

Andrews recalled later: “I told [Moorman] that we would be happy to do whatever we could to help Norfolk Southern with anything they needed….It was an open-ended conversation, and talk about reintroducing steam developed from there.”[2]

In June 2010, Norfolk Southern announced that it was in negotiations with the TVRM to operate a “limited number” of excursions, noting that the program would “highlight milestones in rail history and provide an opportunity for audiences to learn about today's safe and service-oriented freight railroads.” As CEO Wick Moorman also explained: "This is the right time for steam to ride the Norfolk Southern rails...We have a fascinating history, and we have a compelling message about how today's railroads support jobs, competition, and the economy. It is a forward-looking message that resonates with people everywhere."[3] The program was to feature three locomotives: Southern Railway 4501, 2-8-2 Mikado built in 1911 and a veteran of the earlier steam program, Southern Railway 630, a 2-8-0 built in 1904, (both of which were, in 2010, being restored at the TVRM’s Soule shops), and Tennessee Valley Railroad 610, a 2-8-0 built in 1952, all coal burning locomotives.

In the spring of 2011, the restoration of Southern 630 was completed, and TVRM 610 was taken out of service for restoration. Over Labor Day weekend in 2011, Southern 630 rolled onto the mainline to inaugurate the 21st Century Steam program, pulling two trains daily on September 3 and 4 from the TVRM to one of the train yards in Chattanooga and returning, an event coinciding with the 50th anniversary of the founding of the Museum.[4] Two months later, 630 ran an excursion from Knoxville, Tennessee to Chattanooga.[5] 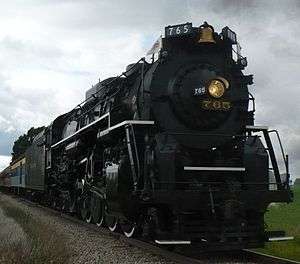 In 2012, the 21st Century Steam excursion program was dominated by relatively short employee appreciation excursions in order to commemorate the 30th anniversary of the founding of the Norfolk Southern Railway. Norfolk Southern leased the Nickel Plate 765, operated by the Fort Wayne Railroad Historical Society to help, as well as operating Southern 630.[6]

Meanwhile, as Southern 630 traveled throughout the South, Nickel Plate Road 765, along with NS 8100 (the Nickel Plate Road heritage unit), pulled employee excursions in the areas around Toledo, Ohio, Bellevue, Ohio, Williamson, West Virginia, Pittsburgh, Pennsylvania, and Harrisburg, Pennsylvania. The locomotive also made a ferry run over the famed Horseshoe Curve near Altoona, Pennsylvania. In September, NKP 765 was back on the rails with NS 1070 (the Wabash Railroad heritage unit) and NS 1072 (the Illinois Terminal Railroad heritage unit) to pull excursions in the St. Louis area.[6]

In May, Nickel Plate Road 765 went on the rails with NS 8102 (the Pennsylvania Railroad heritage unit) for an employee excursion from Cleveland, Ohio to Lorain, Ohio on the 11th and on the 12th, she pulled the “Nickel Plate Limited,” a public excursion from Rocky River, Ohio to Bellevue, Ohio. She then did a ferry run to Pennsylvania in order to pull employee excursions from Altoona to Gallitzin, Pennsylvania on May 18–19 and over Memorial Day Weekend (May 25–27), went with 765, along with NS 8102 and 8098 (the Conrail heritage unit), to pull the “Horseshoe Curve Special,” a public excursion over Horseshoe Curve between Lewistown, Pennsylvania and Gallitzin.[6]

In the first weekend in September 2013, Southern 630 pulled excursion trains between Chattanooga and Cleveland for TVRM's Railfest, along with excursions between Birmingham and the cities of Parrish and Wilton, Alabama later in the month.[7] (On August 16, 2013, the Fort Wayne Railroad Historical Society announced plans to operate a late October excursion with Nickel Plate Road 765 between Fort Wayne, Indiana and West Lafayette, Indiana along tracks once owned by the Wabash Railroad and used by their Cannon Ball service (named after the famed song), which ran between Detroit and St. Louis between 1949 and 1971.[8] This 225 miles (362 km) round-trip excursion is the first excursion with 765 out of Fort Wayne since 1993.[7][8]) In November, Southern 630 pulled from Chattanooga to Harriman and Attalla, as well as an excursion between Chattanooga and Asheville, North Carolina.

The 2014 season has seen repeats of previous trips such as runs between Chattanooga and the cities of Harriman and Atalla, and the Radford and Bull's Gap runs from Bristol, TN/VA. Southern 630 was supposed to pull her first excursion in late March, but was substituted with Norfolk Southern diesel locomotive 8099, the Southern Railway heritage unit, due to mechanical problems with 630. 630, however, was repaired in time to pull the excursions from Bristol. 2014 also saw an excursion between Grundy, Virginia and Devon, West Virginia. Other excursions are planned with 630 between Cincinnati, Ohio and Danville, Kentucky, Lexington, Kentucky to Oneida, Tennessee, and Chattanooga, Tennessee, to Oneida, with the Chattanooga to Oneida trip meant to commemorate the fiftieth anniversary of the beginning of the Southern Railway's steam program. Nickel Plate Road 765 is slated to pull several employee excursions, including trips between Elkhart, Indiana and Bryan, Ohio, Calumet City, Illinois and Argos, Indiana and Detroit, Michigan to Toledo, Ohio. A series of public excursions between Detroit and Fort Wayne, Indiana, are also planned.

The 2015 season saw the debut of N&W 611. She ran several excursions, including a pair of runs between Manassas, Virginia and Riverton, Virginia. She then operated a pair of excursions from Lynchburg, Virginia to Petersburg, Virginia. Following those, 611 went back to Spencer, NC for a week before returning for 2 excursions between Roanoke, Virginia and Lynchburg, VA. Her final excursions were from Roanoke, Virginia to Walton, Virginia. Southern 4501 ran excursions on June 26 and 28 from Bristol, Virginia to Radford, Virginia. She also ran to Bulls Gap, Tennessee June 27. On July 18 and 19, Nickel Plate Road 765 made her first excursion run from Fort Wayne, IN to Lafayette, IN on the route of the famous Wabash Cannonball. On July 25 and 26, she made runs from Youngstown, OH to Ashtabula, OH. Following those moves, steam returned to Buffalo, NY for the first time in almost 40 years when she made runs on August 1 and 2 between Buffalo and Corning, NY. 765 is set to run from Bethlehem, PA to Pittson, PA on August 22 and 23. On August 28 & 29 Nickel Plate Road #765 ran 2 excursions from Bethlehem,PA to Pittston,PA and back. Both excursions were delayed by approximately 2 hours due to logistics problems. But were a huge success. On October 5, Nickel Plate Road #765 ran an Excursion from Steamtown National Park to The Delaware Water Gap and back. After dropping off passengers at The Delaware Water Gap, The entire train proceeded to Portland,PA to turn around on the wye and picked up passengers for the return trip to Steamtown. The excursion was delayed about an hour due to the locomotive stalling in the Naye Tunnel. Rumors ran rampant that vagrants had greased the rails in the tunnel the night previous. However they remained unfounded. On September 7, Nickel Plate Road #765 ran an excursion once again out of Steamtown National Park. This time stopping at the Tobyhanna Army Depot Station. The excursion ran on time and without any problems. Reports of unruly trackside photographers resulted in a fairly large Police presence when all three excursions returned to Steamtown. Just in case there was any trouble. There was none.

On February 22, 2013, the Virginia Museum of Transportation in Roanoke began looking at the feasibility of restoring N&W 611,[9] leading some railfans to wonder whether the locomotive would join the program.

On June 28, 2013, museum officials said that they would restore 611 if they could find the money. The needed work includes repairing the engine truck, preparing a tool car and an auxiliary water tender, applying new safety appliances such as in-cab signals and an event recorder, installing new flues, boiler work, and hydro and fire testing, as well as test runs, inspection, and repairs of the tender, running gears, and air brakes.[10]

NS officials said that if the money could be obtained by October 31, 2013, 611 would join their 21st Century Steam program in 2014.[11] A Norfolk Southern spokesman said, “If her supporters bring No. 611 back to life, NS will be eager and excited for this incredible part of rail history to join the 21st Century Steam Program....The return of 611 would represent a great opportunity to celebrate our heritage while educating a new generation about the critical role railroads play in today’s economy." [12] As of late October 2013, the Fire UP 611! committee had enough money to restore the locomotive but fell short of their October 31 goal of $3 million needed to also build a facility where the restoration could take place.[13] Rather than call the restoration off, the Committee decided to keep working to raise the remaining funds needed for the restoration.

On April 16, 2015, Norfolk Southern officially announced that 611 would be used to power several excursion trains during the 2015 season.[14]

611 was moved to the North Carolina Transportation Museum in Spencer, North Carolina where the locomotive was rebuilt and restored to operation in May 2015. It then powered a series of public trips in the state of Virginia from June 6 to July 5, 2015 from Manassas, Lynchburg, and Roanoke. It will pulled its own series of trips in 2016.