Radford (formerly Lovely Mount, Central City, English Ferry and Ingle's Ferry) is an independent city in the U.S. state of Virginia. As of the 2010 census, the population was 16,408.[3] For statistical purposes, the Bureau of Economic Analysis combines the city of Radford with neighboring Montgomery County.

Radford is included in the Blacksburg–Christiansburg–Radford metropolitan area.

Radford is the home of Radford University. The Radford Arsenal is nearby in Pulaski and Montgomery counties. Radford City has four schools: McHarg Elementary, Belle Heth Elementary, Dalton Intermediate, and Radford High School. Millennials (ages 15-34 years old) make up over 55.5% of the population of Radford, one of the highest rates in the country.[4]

Radford was named for Dr. John B. Radford.[5] Dr. Radford's home Arnheim was listed on the National Register of Historic Places in 2002.[6] Radford was originally a small village of people that gathered near the New River, which was a major draw to travelers for fresh water and food while traveling west. The town had a major population increase in 1854 when the Virginia and Tennessee Railroad came through. A large depot was placed at Lovely Mount because of its strategic positioning between the eastern and western parts of the state. The actual station was not on Lovely Mountain, located on the southwestern side of town, but Lovely Mount was a known mountain and naming the station this would help people to remember the location of the depot. The Railroad Depot caused the population of Radford to boom. It also caused a major increase in the amount of trade and business in the area. Radford became a railroad town. The original name for Radford was Lovely Mount because of the location of the depot; the name was changed in 1891 to Radford. Radford, or at least the train station area, was called Central Depot because of its central location halfway between Lynchburg and Bristol, Virginia of the original railroad, the Virginia and Tennessee Railroad (later the Norfolk and Western Railway).

From 1900–1930, many companies came to Radford, including an ice company, a creamery, milling companies, piping, and preserving plants. In 1913, Radford was selected to become home to State Normal School, a women’s college. The school would later, in 1924, become Radford College and then in 1979 would be renamed Radford University. The presence of a college brought even more attention to Radford, causing even more population growth. In 1940– 1941 the US Military decided to build a manufacturing plant for gunpowder and other ammunition needed by the military. Thus the Radford Army Ammunition Plant, or the “Arsenal” as it would come to be called, joined the railroad and Lynchburg Foundry as major employers creating a huge influx in population. Many families moved to the area. Housing for the Arsenal was built in specific areas of town and these neighborhoods still exist today; Monroe Terrace, Radford Village, and Sunset Village. Today these are Radford’s main residential neighborhoods. The railroad ceased passenger service through Radford 1971 as personal transportation moved to the fairly new interstate highway system and the airways. However, the railroad route through Radford is still a major component of Norfolk Southern Railway's Roanoke to Bristol route. But, Radford no longer needed the railroad passenger service to survive.

The James Charlton Farm, Ingles Bottom Archeological Sites, and Ingles Ferry are listed on the National Register of Historic Places.[6]

Glencoe Museum is located in west downtown Radford overlooking the New River.[8] The house was built in 1870 in the 19th century Victorian style, specifically Second Empire, and serves as a home for many artifacts concerning the beginnings of Radford. It was the postbellum home of Confederate Brigadier General Gabriel C. Wharton. It is a large, two-story, five bay, brick dwelling, and originally had quite extensive grounds. The original house had a barn, chicken coop, smoke house, and an ice house. The name Glencoe is thought to be inspired by Anne Wharton’s ancestry. Her family was originally from Scotland. The house didn’t appear on Radford’s tax records until 1876, it took a very long time to build a house of its size and grandeur in the 1800s. The house was kept in the family till 1996 when, after being deserted for 30 years, the house was given to the city of Radford.[9]

The house and grounds were donated by the Kollmorgen Motion Technology Group. The house was converted into a museum to show off pieces of history found in Radford. There are many Native American artifacts in the museum that help us understand the New River’s importance to the Native American culture and way of life. In Glencoe, a person can find some of the original blueprints for the city and pictures of Radford from the past. There is also Local Sports History exhibit and an exhibit on how the river impacted life in Radford. The New River Exhibit also includes a lot of information on ferries, steamboats, and other modes of transportation used on the river. Glencoe Museum is a very popular attraction for school field trips and visitors who are trying to find out more about Radford.

It was listed on the National Register of Historic Places in 2000.[6]

Bisset Park is the largest of the four parks, located on the New River, it stretches 57 acres (23 ha). Bisset Park was named for David Bisset, a major contributor and overseer of parks and recreation in Radford. Bisset Park is located in the center of town across from Wildwood Park. Sunset Park is located in the center of the west end of Radford. Riverview is used mainly for soccer practices and like its name suggests is also located on the river and in the west end of Radford. Wildwood Park is a wildlife and plant reserve for the city.

Wildwood Park is located in the center of town.[5] The park separates the West or Industrial side of Radford from the Eastern side where Radford University is located. The park contains extensive walking and biking paths. The park is used by Radford High School for biology classes. The Biology classes perform a great quantity of animal, plant, and stream test including a Tree Population and Species Observation, Clean Stream Testing for federal use, Monarch Butterfly Observation, Spring Wildflower Observation, and Observation of Exotic Species. Conelly’s Run flows through the park and provides great crayfish hunting for the passerby during the summer months. Wildwood Park is the only perfectly preserved place in Radford. With limited exotic species, no buildings or sports fields, and many walking and biking trails, the park represents the way Radford looked before the coming of the railroad. Wildwood Park is a very quiet place where many types of native animals like birds, raccoons, opossums, skunks, and groundhogs decide to make their homes. In the spring, people travel from all over the state and sometimes country to see the wide variety of wildflowers. 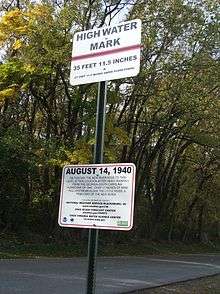 High-water mark sign in Bisset Park marking the height of the 1940 flood.

The worst river flooding in Radford's recorded history occurred on August 14, 1940 with a slow-moving tropical depression. The 1940 hurricane season produced eight storms, four of which were hurricanes. Around August 5 of that year, a tropical storm was detected along the northern Leeward Islands in the West Indies. The storm brought wind gusts of 44 mph to San Juan, Puerto Rico as it moved northwestward. By August 6 it began a turn to the north while producing rough seas in the southeastern Bahamas. Four days later on August 10 the S.S. Maine off the southeast coast measured hurricane-force winds and the storm began movement again toward the northwest. The storm made landfall as a category 1 hurricane on August 11 at approximately 4 PM near Beaufort, South Carolina (along the SC/GA border). Winds reached 73 mph in nearby Savannah, Georgia.

As the Georgia-South Carolina hurricane of 1940 moved inland, record rainfall amounts were observed from South Carolina north through the Smoky Mountains and into southwest and central Virginia. The storm meandered along the Cumberland Plateau region as rain began falling in Virginia on August 13. The mountainous terrain coupled with extremely slow movement from the now tropical depression produced tremendous amounts of rain. Copper Hill in Floyd County, Virginia received the highest rainfall in the state: 17.03”.

The United States Geological Survey (USGS) stream gauge across the New River (Kanawha River) from Bisset Park measured an all-time record height of 35 feet 11.5 inches which is nearly 22 feet above what is considered flood stage. Residents in low-lying areas were forced to evacuate their homes and both the former Burlington Mills and the Lynchburg Foundry manufacturing plants were shut down because of high water. The road leading from Radford into Pulaski County towards Claytor Lake Dam was inundated and impassable. Thankfully, no deaths were reported across southwest Virginia, but several million dollars worth of damage occurred (1940 USD).

On October 18, 2011 a sign recognizing the historic flooding was dedicated in Bisset Park near downtown Radford. The sign was donated by local resident Anthony Phillips, a hydrometeorologist from Snowville, Virginia and installation was sponsored by the National Weather Service and the United States Geological Survey through the High Water Mark (HWM) Project.[11][12] The project helps raise awareness of flood risk by installing high-water mark signs in prominent locations within communities that have experienced severe flooding.[13]

There were 5,809 households out of which 18.8% had children under the age of 18 living with them, 33.9% were married couples living together, 8.9% had a female householder with no husband present, and 54.5% were non-families. 32.0% of all households were made up of individuals and 8.7% had someone living alone who was 65 years of age or older. The average household size was 2.25 and the average family size was 2.78.

The median income for a household in the city was $24,654, and the median income for a family was $46,332. Males had a median income of $33,045 versus $22,298 for females. The per capita income for the city was $14,289. About 6.9% of families and 31.4% of the population were below the poverty line, including 10.8% of those under age 18 and 9.4% of those age 65 or over. However, traditional measures of poverty can be extremely misleading when applied to a community with a large proportion of university students, such as Radford. Millennials (ages 15-34 years old) make up over 55.5% of the population of Radford city, one of the highest rates in the country.[20]

The climate in this area has mild differences between highs and lows, and there is adequate rainfall year round. According to the Köppen Climate Classification system, Radford has a marine west coast climate, abbreviated "Cfb" on climate maps.[24]