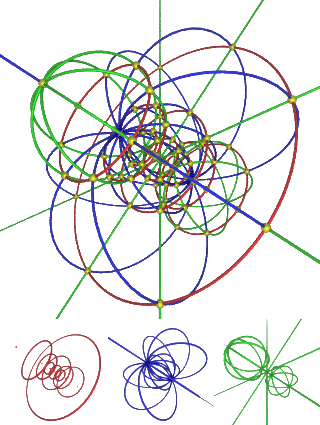 The 3-sphere centered at the origin with radius 1 is called the unit 3-sphere and is usually denoted S3:

It is often convenient to regard R4 as the space with 2 complex dimensions (C2) or the quaternions (H). The unit 3-sphere is then given by

The 3-sphere is naturally a smooth manifold, in fact, a closed embedded submanifold of R4. The Euclidean metric on R4 induces a metric on the 3-sphere giving it the structure of a Riemannian manifold. As with all spheres, the 3-sphere has constant positive sectional curvature equal to 1/r2 where r is the radius.

Much of the interesting geometry of the 3-sphere stems from the fact that the 3-sphere has a natural Lie group structure given by quaternion multiplication (see the section below on group structure). The only other spheres with such a structure are the 0-sphere and the 1-sphere (see circle group).

There is an interesting action of the circle group T on S3 giving the 3-sphere the structure of a principal circle bundle known as the Hopf bundle. If one thinks of S3 as a subset of C2, the action is given by

There are several well-known constructions of the three-sphere. Here we describe gluing a pair of three-balls and then the one-point compactification.

A 3-sphere can be constructed topologically by "gluing" together the boundaries of a pair of 3-balls. The boundary of a 3-ball is a 2-sphere, and these two 2-spheres are to be identified. That is, imagine a pair of 3-balls of the same size, then superpose them so that their 2-spherical boundaries match, and let matching pairs of points on the pair of 2-spheres be identically equivalent to each other. In analogy with the case of the 2-sphere (see below), the gluing surface is called an equatorial sphere.

Note that the interiors of the 3-balls are not glued to each other. One way to think of the fourth dimension is as a continuous real-valued function of the 3-dimensional coordinates of the 3-ball, perhaps considered to be "temperature". We take the "temperature" to be zero along the gluing 2-sphere and let one of the 3-balls be "hot" and let the other 3-ball be "cold". The "hot" 3-ball could be thought of as the "upper hemisphere" and the "cold" 3-ball could be thought of as the "lower hemisphere". The temperature is highest/lowest at the centers of the two 3-balls.

This construction is analogous to a construction of a 2-sphere, performed by gluing the boundaries of a pair of disks. A disk is a 2-ball, and the boundary of a disk is a circle (a 1-sphere). Let a pair of disks be of the same diameter. Superpose them and glue corresponding points on their boundaries. Again one may think of the third dimension as temperature. Likewise, we may inflate the 2-sphere, moving the pair of disks to become the northern and southern hemispheres.

Rest the south pole of a unit 2-sphere on the xy-plane in three-space. We map a point P of the sphere (minus the north pole N) to the plane by sending P to the intersection of the line NP with the plane. Stereographic projection of a 3-sphere (again removing the north pole) maps to three-space in the same manner. (Notice that, since stereographic projection is conformal, round spheres are sent to round spheres or to planes.)

A somewhat different way to think of the one-point compactification is via the exponential map. Returning to our picture of the unit two-sphere sitting on the Euclidean plane: Consider a geodesic in the plane, based at the origin, and map this to a geodesic in the two-sphere of the same length, based at the south pole. Under this map all points of the circle of radius π are sent to the north pole. Since the open unit disk is homeomorphic to the Euclidean plane, this is again a one-point compactification.

The exponential map for 3-sphere is similarly constructed; it may also be discussed using the fact that the 3-sphere is the Lie group of unit quaternions.

Coordinate systems on the 3-sphere

The four Euclidean coordinates for S3 are redundant since they are subject to the condition that x02 + x12 + x22 + x32 = 1. As a 3-dimensional manifold one should be able to parameterize S3 by three coordinates, just as one can parameterize the 2-sphere using two coordinates (such as latitude and longitude). Due to the nontrivial topology of S3 it is impossible to find a single set of coordinates that cover the entire space. Just as on the 2-sphere, one must use at least two coordinate charts. Some different choices of coordinates are given below.

where ψ and θ run over the range 0 to π, and φ runs over 0 to 2π. Note that, for any fixed value of ψ, θ and φ parameterize a 2-sphere of radius sin ψ, except for the degenerate cases, when ψ equals 0 or π, in which case they describe a point.

and the volume form by

These coordinates have an elegant description in terms of quaternions. Any unit quaternion q can be written as a versor:

With τ in this form, the unit quaternion q is given by 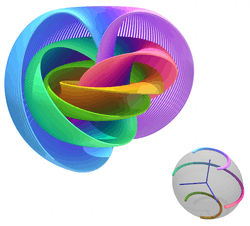 The Hopf fibration can be visualized using a stereographic projection of S3 to R3 and then compressing R3 to a ball. This image shows points on S2 and their corresponding fibers with the same color.

For unit radius another choice of hyperspherical coordinates, (η, ξ1, ξ2), makes use of the embedding of S3 in C2. In complex coordinates (z1, z2) ∈ C2 we write

This could also be expressed in R4 as

Here η runs over the range 0 to π/2, and ξ1 and ξ2 can take any values between 0 and 2π. These coordinates are useful in the description of the 3-sphere as the Hopf bundle 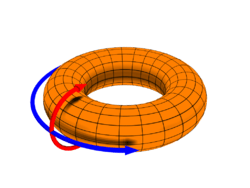 For any fixed value of η between 0 and π/2, the coordinates (ξ1, ξ2) parameterize a 2-dimensional torus. Rings of constant ξ1 and ξ2 above form simple orthogonal grids on the tori. See image to right. In the degenerate cases, when η equals 0 or π/2, these coordinates describe a circle.

and the volume form by

To get the interlocking circles of the Hopf fibration, make a simple substitution in the equations above[2]

In this case η, ξ1 specify which circle, and ξ2 specifies the position along each circle. One round trip (0 to 2π) of either ξ1 or ξ2 causes you to make one full circle of both limbs of the torus.

Another convenient set of coordinates can be obtained via stereographic projection of S3 from a pole onto the corresponding equatorial R3 hyperplane. For example, if we project from the point (−1, 0, 0, 0) we can write a point p in S3 as

This map gives an injective algebra homomorphism from H to the set of 2 × 2 complex matrices. It has the property that the absolute value of a quaternion q is equal to the square root of the determinant of the matrix image of q.

The set of unit quaternions is then given by matrices of the above form with unit determinant. This matrix subgroup is precisely the special unitary group SU(2). Thus, S3 as a Lie group is isomorphic to SU(2).

Using our Hopf coordinates (η, ξ1, ξ2) we can then write any element of SU(2) in the form

Another way to state this result is if we express the matrix representation of an element of SU(2) as a linear combination of the Pauli matrices. It is seen that an arbitrary element U ∈ SU(2) can be written as

The condition that the determinant of U is +1 implies that the coefficients α1 are constrained to lie on a 3-sphere.

Writing in the American Journal of Physics,[3] Mark A. Peterson describes three different ways of visualizing 3-spheres and points out language in The Divine Comedy that suggests Dante viewed the Universe in the same way.

Note: This article uses the alternate naming scheme for spheres in which a sphere in n-dimensional space is termed an n-sphere.