April 25 Sports Club has one of the most successful football clubs in the country with over 10 wins in the DPR Korea League Cup. The club's name of April 25 comes from Military Foundation Day and the club belongs to the Korean People's Army.[1] 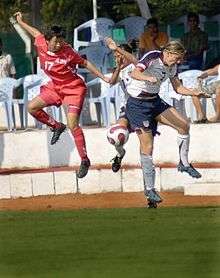 April 25 has fielded a basketball team. In May 2015, they came to Mongolia to assist in training the Mongolian national team as preparation of the latter's campaign at the 2013 East Asian Basketball Championship.[2]

April 25 is also known to organize a women's volleyball team. April 25 participated at the 2015 VTV International Women's Volleyball Cup, an invitational tournament in Vietnam. The North Korean club won the bronze medal defeating Vietnamese side, VTV Bình Điền Long An. Their player, Jong Jin Sim was named Most Value Player of the tournament.[3]April 25 also has a men's volleyball team.[4]