This article is about the Saudi Arabian football club. For other uses, see Al-Hilal.

Al-Hilal Saudi Football Club (Arabic: نادي الهلال السعودي لكرة القدم‎‎), also known simply as Al-Hilal (The Crescent), is a Saudi Arabian professional football team based in the Saudi Arabian capital of Riyadh. It plays at the Saudi Professional League and holds 57 official titles. Founded in 1957, it has obtained a record of 43 domestic titles as well as a record 6 trophies in various Asian championships, and a record of 8 Arab championships.[2]

The club's nicknames are "The Boss" and "The Blue Waves". The IFFHS ranked Al-Hilal as the Asian Club of the 20th Century.[3]

Among the club's most famous players were Yousuf Al-Thunayan and Sami Al-Jaber of the Saudi Arabian national football team, and goalkeeper Mohamed Al-Deayea. The club's current manager is Ramon Diaz and is captained by Yasser Al-Qahtani.

Al-Hilal Club was originally known as the Olympic Club during its founding by Abdul Rahman Bin Saad Bin Saeed on 15 October 1957 in Riyadh. The club's name lasted for only one year before it was changed to its current name on 3 December 1958 by King Saud Bin Abdul-Aziz. He changed the name after he attended a tournament that was contested between the Olympic Club, Al-Shabab, Al-Riyadh and El-Kawkab clubs. As soon as the club's establishment, Al-Hilal enjoyed not only grassroots support but also royal attention.[4]

After spending their formative years building a squad, the club made their first mark by lifting the King's Cup trophy in 1961. That began a period in which the club won 50 official competitions. Al-Hilal recaptured the King's Cup in 1964, with a penalty shootout victory over two-time Asian champions Al-Ittihad. 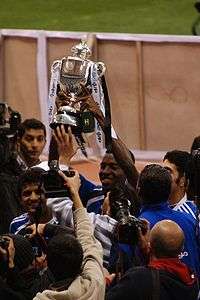 The club were the inaugural winners when the Saudi Premier League came into existence in the 1976–77 season. Al-Hilal won the title another 12 times and finished runners-up on 12 occasions in the space of 32 years. Al-Hilal also have seven King's Cup, twelve Crown Prince Cup and eight Saudi Federation Cup titles.[5]

With the success, a number of players and coaches from outside Saudi Arabia joined the club in the 1970s, including Brazilians Mario Zagallo and Roberto Rivelino.

Al Hilal is the only Asian team which achieves six Asian titles.

Al Hilal reached the final of the AFC Champions League in 2014, where they faced Western Sydney Wanderers. The Australian club won 1–0 on aggregate.[6]

Al-Hilal plays their home games at King Fahd International Stadium in Riyadh. The stadium was constructed in 1987 with a capacity of 67,000 people. The club's reserve team stadium, Prince Faisal bin Fahd Stadium, was used in 2011–12 when King Fahd Stadium was under renovation. When prince Abdulrahman bin Musa'ad became the owner of the club in 2008, there was some serious idea of making Al-Hilal home avenue but it was shortly declined.

Al-Hilal has a long-standing rivalry with Al-Ittihad. From the start of national competition the clubs were seen as representatives of two rival cities: Riyadh and Jeddah. Matches between the two are often called 'El Clasico's. After the success of Al Hilal in Asia when they won two Asian Club Championship in years 1991 and 1999–2000, Al Ittihad has won AFC Champions League two times in a row, in 2004 and 2005. Al-Hilal won the clasico 62 times, while Al-Ittihad has won it 50 times and two sides have drawn 35 times. The biggest win was when Al-Hilal defeated Al-Ittihad 5–0 in 2009–2010.[7]

Another rivalry is with their neighbors Al-Nassr, which is called Riyadh's Derby. They have met 148 times, Al-Hilal has won 59 times, and lost 48 times, while 41 ties have ended in a draw.[8] The biggest win is for Al-Hilal when they defeated Al-Nassr 5–3 in 2010 King Cup of Champions. The rivalry with Al-Nassr is violent between them more than the rivalry with Al-Ittihad. As an example, when Al-Hilal reached the 2014 AFC Champions League Final, in 2nd leg Al-Nassr fans awaited Western Sydney Wanderers arrival at the airport to spur them on against Al-Hilal and tried to sabotage Al-Hilal's ticket plan.[9]

Mobily is the main sponsor of Al-Hilal, and as part of the sponsorship deal, their logo is displayed on the front of the club's shirts and a plethora of other merchandise. The Mobily deal was announced by the club's President Abdulrahman bin Musa'ad on 14 October 2008, and is worth a Saudi record SAR 517 million, to be paid over six years (SAR 69.1 million per year).

If the team wins any trophy, they will get SAR 3 million for each one (USD 800,000). Al-Hilal will get 60% of any other sponsor that want to sponsor the team, with Mobily's agreement, 20% of football match tickets sold, 50% of Mobily Al-Hilal txt message service profit. Al-Hilal will get SAR 10 million if the number of subscribers in Mobily's Al-Hilal service reaches 200,000 and another 10 million if they reach 400,000 subscribers. Al-Hilal will get 10% of each mobile package sold under the Al-Hilal name (such as blue wave package) and 40% of the club membership fees. The minimum net income from Mobily deal is SAR 75 million per year (USD 20 million/year). Also, President Abdulrahman bin Musa'ad made a contract with "Omar Al-Mady", CEO of Volkswagen Group in Saudi Arabia. He was the one who represented the Volkswagen Group Global in Saudi Arabia on 9/18/2014. The period of the contract is 6 years. This means it will expire in 2020.[10]

Like most professional teams all over the world, Al-Hilal and Mobily have introduced a membership card (Hilali) for fans to connect with their club. Fans are now able to join the Hilal membership scheme for the clubs starting 2012–13 season onwards. Hilali membership benefits includes VIP tickets to all Al-Hilal home and away matches, using the club facilities, meeting with players monthly and discounts at Al-Hilal Mobily stores.

Al-Hilal has a chain of luxury retail stores that sell the club's products. The first branch opened on 1 February 2011 on the most expensive commercial street in Riyadh at a cost of SAR 15 million (USD 4 million). It was the first store from any Saudi club, and the biggest club store in the Middle East. In the first week of opening, sales surpassed SAR 1 million (USD 266,000). Mobily plans to cover the kingdom's main cities with seven branches by the end of 2012. Khobar's branch has opened on 5 January 2012, which Jeddah branch opened on 5 April 2012. The stores offer thousands of high quality products including clothes, accessories, children toys and many other products.

The stores' profits currently go to Mobily only. After the investment cost is covered they will share the profit with the club.

Al-Hilal receives SR 4.5 million per year (USD 1.2 million/year) from the Saudi Arabia Football Federation as the federation sell the complete matches' right in one package and all the clubs in the Saudi Professional League share the revenue equally. The income may increase dramatically in near future as clubs will have the rights to sell their own matches' broadcasting rights.

The club's president and other board members pay any extra money required to run the club as the total expenses of the club in recent seasons surpassed SR 140 million (USD 38 million). This increase in expenses is due to the high level foreign and national players the club signed with such as Thiago Neves, Mirel Rădoi, Christian Wilhelmsson, Osama Hawsawi, Youssef El-Arabi and others.

Special seats have been allocated for the disabled to watch the training. Twenty-five percent of the income of tickets sold goes to charities. Players and board members arrange and attend social activities for charities during Eid and other holidays.

In 2009, the club opened a new camp in Riyadh. It contains 25 rooms, meeting rooms, smart room for lectures, library, eating room, living rooms, a big salon and a medical clinic. It also has entertainment corners for video games, table tennis, billiards, table football and many others. There are two training fields for the senior team.

As of Saudi Premier League:

This is a list of Al-Hilal FC presidents and chairmen from its foundation in 1957.[11]

The table below chronicles the achievements of Al-Hilal in various competitions since 1999.

Asian Footballer of the Year

Asia‘s best Goalkeeper of the Century by IFFHS

Arabian Footballer of the Year