For other uses, see Midfielder (disambiguation). 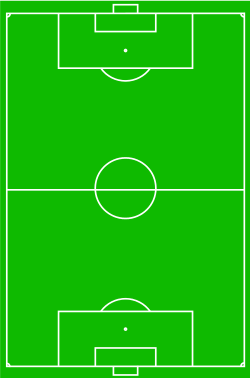 The midfield positions highlighted in relation to other positions in association football.

A midfielder is an association football position.[1] Midfielders are generally positioned on the field between their team's defenders and forwards. Some midfielders play a more defensive role, breaking up attacks and are more disciplined to their roles they are otherwise known as defensive midfielders, while others blur the boundaries, more mobile, efficient in passing and are commonly referred to as deep-lying midfielders, playmakers, box to box or holding midfielders. The number of midfielders on the team and their assigned roles depends on the team's formation; the collective group of these players on the field is sometimes referred to as the midfield.[2]

Most managers assign at least one midfielder to disrupt the opposing team's attacks, while others may be tasked with creating goals, or have equal responsibilities between attack and defence. Midfielders are the players who typically travel the greatest distance during a match.[3] 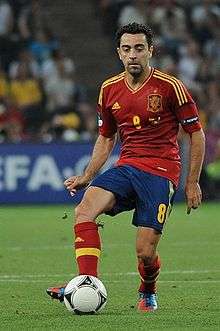 Former Spain midfielder Xavi was voted to the FIFPro World XI six years in a row.

Central or centre midfielders are players whose role is divided roughly equally between attack and defence. These players will try to pass the ball to the team's attacking midfielders and forwards and may also help their team's attacks by making runs into the opposition's penalty area and attempting shots on goal themselves.

When the opposing team has the ball, a central midfielder may drop back to protect the goal or move forward and press the opposition ball-carrier to recover the ball. A centre midfielder defending their goal will move in front of their centre-backs in order to block long shots by the opposition and possibly track opposition midfielders making runs towards the goal.

The term box-to-box midfielder refers to central midfielders who have good abilities and are skilled at both defending and attacking.[5] These players can therefore track back to their own box to make tackles and block shots and also run to the opponents' box to try to score.[6] A good box-to-box midfielder needs good passing, vision, control, stamina, tackling and marking in defence, and shooting and dribbling in attack.

Left and right midfielders have a role balanced between attack and defence, similar to that of central midfielders, but they are positioned closer to the touchlines of the pitch. They may be asked to cross the ball into the opponents' penalty area to make scoring chances for their teammates, and when defending they may put pressure on opponents who are trying to cross.[7]

Common modern formations that include left and right midfielders are the 4−4−2, the 4−4−1−1, and the 4−5−1 formations.[8] Jonathan Wilson describes the development of 4−4−2 formation: "…the winger became a wide midfielder, a shuttler, somebody who might be expected to cross a ball but was also meant to put in a defensive shift."[9] A notable example of a right midfielder is David Beckham.[10] 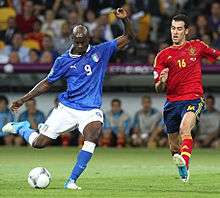 Defensive midfielders are midfield players who focus on protecting their team's goal. These players may defend a zone in front of their team's defence, or man mark specific opposition attackers.[11][12][13] Defensive midfielders may also move to the full-back or centre-back positions if those players move forward to join in an attack.[14][15] Sergio Busquets described his attitude: "The coach knows that I am an obedient player who likes to help out and if I have to run to the wing to cover someone's position, great."[15] A good defensive midfielder needs good passing, marking, tackling, interceptions and great stamina and strength (for their tackling).

A holding or deep-lying midfielder stays close to their team's defence, while other midfielders may move forward to attack.[16] A player in this role will try to protect their goal by disrupting the opponents' attacking moves and stopping long shots on the goal.

…we knew that Zidane, Raúl and Figo didn't track back, so we had to put a guy in front of the back four who would defend.

The holding midfielder may also have responsibilities when their team has the ball. This player will make mostly short and simple passes to more attacking members of their team but may try some more difficult passes depending on the team's strategy.[18] 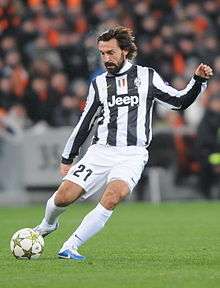 Italian deep-lying playmaker Andrea Pirlo executing a pass. Pirlo is often regarded as one of the best deep-lying threats of all time.

A deep-lying playmaker is a holding midfielder who specializes in ball skills such as passing, rather than defensive skills like tackling.[20] When this player has the ball, they may attempt longer or more complex passes than other holding players. They may try to set the tempo of their team's play, retain possession, or build plays through short exchanges, or they may try to pass the ball long to a centre forward or winger, or even pass short to a teammate in the hole, the area between the opponents' defenders and midfielders.[20][21][22] In Italy, the deep-lying playmaker is known as a "regista",[23] whereas in Brazil, it is known as a "meia-armador"[24]

Writer Jonathan Wilson described Xabi Alonso's role: "although capable of making tackles, [he] focused on keeping the ball moving, occasionally raking long passes out to the flanks to change the angle of attack."[18] 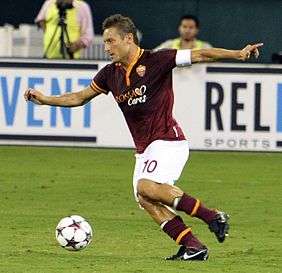 Italian offensive playmaker Francesco Totti in action for Roma in 2013

These players typically serve as the offensive pivot of the team, and are sometimes said to be "playing in the hole," although this term can also be used as deep-lying forward. The attacking midfielder is an important position that requires the player to possess superior technical abilities in terms of passing and dribbling, as well as, perhaps more importantly, the ability to read the opposing defence in order to deliver defence-splitting passes to the striker.

This specialist midfielder's main role is to create good shooting and goal-scoring opportunities using superior vision, control, and technical skill, by making crosses, through balls, and headed knockdowns to teammates. They may try to set up shooting opportunities for themselves by dribbling or performing a give-and-go with a teammate. Attacking midfielders may also make runs into the opponents' penalty area in order to shoot from another teammate's pass.[2]

Where a creative attacking midfielder, i.e. a advanced playmaker, is regularly utilized, he is commonly the team's star player, and often wears the number 10 shirt. As such, a team is often constructed so as to allow their attacking midfielder to roam free and create as the situation demands. One such popular formation is the 4–4–2 "diamond" (or 4–1–2–1–2), in which defined attacking and defensive midfielders replace the more traditional pair of central midfielders. Known as the "fantasista" or "trequartista" in Italy,[26] in Brazil, the offensive playmaker is known as the "meia atacante,"[24] whereas in Argentina and Uruguay, it is known as the "enganche."[29]

Players in the highlighted positions can be referred to as wingers.

In the 2−3−5 formation popular in the late 19th century wingers remained mostly near the touchlines of the pitch, and were expected to cross the ball for the team's inside and centre forwards.[32] Traditionally, wingers were purely attacking players and were not expected to track back and defend. This began to change in the 1960s. In the 1966 World Cup, England manager Alf Ramsey did not select wingers from the quarter-final onwards. This team was known as the "Wingless Wonders" and led to the modern 4–4–2 formation.[33][34]

This has led to most modern wide players having a more demanding role in the sense that they are expected to provide defensive cover for their full-backs and track back to repossess the ball, as well as provide skillful crosses for centre forwards and strikers.[35] Some forwards are able to operate as wingers behind a lone striker. In a three-man midfield, specialist wingers are sometimes deployed down the flanks alongside the central midfielder or playmaker.

Even more demanding is the role of wing-back, where the wide player is expected to provide both defence and attack.[36] As the role of winger can be classed as a forward or a midfielder, so this role blurs the divide between defender and midfielder. 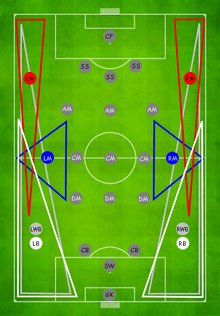 A winger is an attacking midfielder who is stationed in a wide position near the touchlines.[35] Wingers such as Stanley Matthews or Jimmy Johnstone used to be classified as forwards in traditional W-shaped formations, and were formally known as "Outside Right" or "Outside Left," but as tactics evolved through the last 40 years, wingers have dropped to deeper field positions and are now usually classified as part of the midfield, usually in 4–4–2 or 4–5–1 formations (but while the team is on the attack, they tend to resemble 4–2–4 and 4–3–3 formations respectively).

The responsibilities of the winger include:

The prototypical winger is fast, tricky and enjoys 'hugging' the touchline, that is, running downfield close to the touchline and delivering crosses. However, players with different attributes can thrive on the wing as well. Some wingers prefer to cut infield (as opposed to staying wide) and pose a threat as playmakers by playing diagonal passes to forwards or taking a shot at goal. Even players who are not considered quick, have been successfully fielded as wingers at club and international level for their ability to create play from the flank. Occasionally wingers are given a free role to roam across the front line and are relieved of defensive responsibilities.

The typical abilities of wingers include:

Traditionally, right-footed players are played on the right wing and left-footed players on the left as a matter of familiarity and comfort. However, in the modern game, coaches usually demand wingers to be able to play on both flanks and to switch sides during play regularly as a quick change of tactics. For instance, a right-footed winger who plays on the left flank (or vice versa; with a player playing on the "opposite" side from his or her strong foot often being referred to as an inverted winger) is more comfortable cutting inside, which suits the styles of playmaker forwards who can cause a threat both by shooting from distance, dribbling towards goal, or sliding through-ball passes to other forwards. Another advantage is that the winger can cut inside, towards the weaker foot of the full-back. Clubs such as Real Madrid often choose to play their wingers on the "wrong" flank for this reason; former Real Madrid coach José Mourinho often played Ángel Di María on the right and Cristiano Ronaldo on the left. Former Bayern Munich manager Jupp Heynckes often played the left-footed Arjen Robben on the right and the right-footed Franck Ribéry on the left. One of the foremost practitioners of playing from either flank was German winger Jürgen Grabowski, whose flexibility helped Germany to third place in the 1970 World Cup, and the world title in 1974.

Although wingers are a familiar part of football, the use of wingers is by no means universal. There are many successful football teams who operate without wingers. A famous example is Milan, who typically play in a narrow midfield diamond formation or in a Christmas tree formation (4–3–2–1), relying on full-backs to provide the necessary width down the wings.