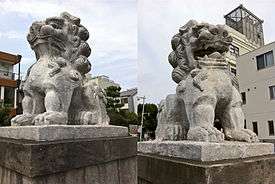 The term A-un (阿吽) is the transliteration in Japanese of the two syllables "a" and "hūṃ". Written in Devanagari as अहूँ.

The term is also used in Shinto and Buddhist architecture to describe the paired statues common in Japanese religious settings, most notably the Niō and the komainu.[1] In most cases one of the two, the right one, has its mouth open to pronounce the sound "a", while the other has it closed to utter the sound "um". The symbolism is the same already seen. The generic name for statues with an open mouth is agyō (阿形, lit. "a" shape), that for those with a closed mouth ungyō (吽形, lit. "un" shape").[1]

The term a-un is used figuratively in some Japanese expressions as "a-un breathing" (阿吽の呼吸, a-un no kokyū) or "a-un relationship" (阿吽の仲, a-un no naka), indicating an inherently harmonious relationship or non-verbal communication.